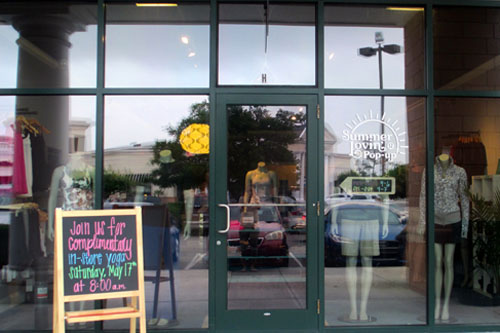 Lululemon Athletica has opened a temporary store in The Forum to test the market. (Photo by Samantha Santana)
Lululemon Athletica, an international retailer that designs and sells yoga-inspired athletic clothing, opened its doors in Wilmington this month.

The store is a pop-up shop and is only temporary, store manager Steve Young said.

“A pop-up shop is Lululemon’s way to bring products [to Wilmington],” Young said Friday. “They’re testing the waters to see if a full store can be sustained.”

The store, which opened May 10, is at The Forum shopping center on Military Cutoff Road in building 1121, unit H. Nursery retail store Peanut Butter & Jelly previously occupied the space but has since moved to a larger spot in the center.

Wilmington was selected for the pop-up store based on the company’s Internet traffic, Young said.

“The [Wilmington] area has been asking Lululemon to come back,” he said. The retailer used to have a store on Oleander Drive.

Jason Swain, a principal broker for Wilmington-based Swain & Associates that manages and leases The Forum, said Lululemon Athletica was a good fit for the center.

“[Lululemon Athletica] wanted to be in a place where there was a community,” Swain said. “We got Without Limits, Epic Food Co. – all of which is catering to health-conscious people.”

Swain said he could see Lululemon as a permanent fixture in Wilmington.

“They’re doing a lot of things with a lot of the folks here,” Swain said. “Their goal is to become a long-term staple.”

To boost sales and get the community involved, Lululemon Athletica has begun complimentary yoga classes every Saturday morning at 8 a.m. in the 1,200-square-foot space.

“I hope to work with them as an instructor in the future. I am certain they will be successful and help strengthen the yoga community within the area,” said Carolyn Royce, a yoga instructor for nearby Open Studio, also on Military Cutoff Road. “I am excited to see their goals come to fruition and wholeheartedly support them in establishing a permanent presence in Wilmington.”

Young said the pop-up store would be open through Sept. 28.