Downtown Still In Demand, Despite Vacancies 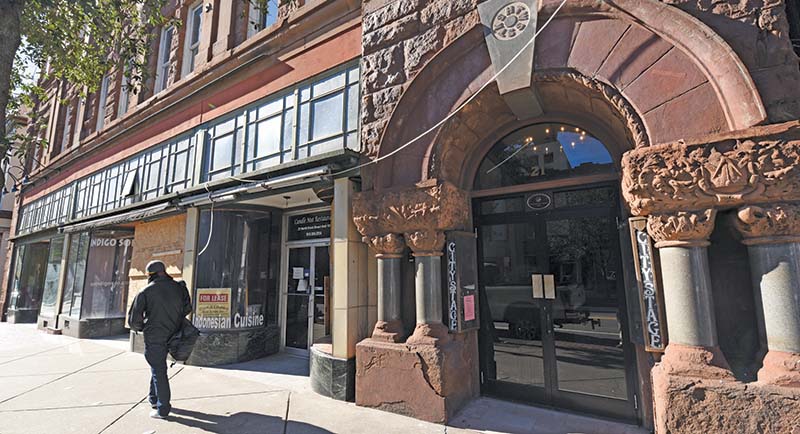 Property owners and those in the real estate industry say vacant spaces in downtown Wilmington, including storefronts along Front Street, aren't expected to last long. (Photo by Michael Cline Spencer)
One reason recent vacancies in downtown Wilmington don’t worry Carlton Fisher is that he gets calls every week about the building at 140 N. Front St.

Fisher, a commercial real estate broker, owns the building, which is under a lease by Farmin’ on Front. Officials with the grocery store decided to “pause its daily operations,” according to a Farmin’ Stores post on Facebook in October, after Hurricane Florence caused its generators to fail in September.

Real estate professionals say the Farmin’ vacancy and other empty storefronts along Front Street and elsewhere in downtown Wilmington aren’t indicative of a declining market but rather a blip caused in part by Hurricane Florence and other factors.

“I’m still seeing very strong demand because I still get calls from people – ‘What’s going to happen to the Farmin’ building?’ ‘We’re interested in the Farmin’ building.’ ‘If they’re going to leave, let us know,’” Fisher said Nov. 28. “Farmin’ has said they’re still in the deal, and they haven’t given me any notice that they are vacating, unless something changes. But if it does, I’ve got people calling me every week.”

Efforts to reach someone with Farmin’ on Front were not successful in early December, but Farmin’ Stores said in its Facebook post, “Farmin’ will further use this time to implement and integrate other changes to better serve you, our customer. Updates regarding our progress and re-opening schedule will occur as new information is available.”

Fisher, of Coastal Realty Co. who also owns other downtown properties, explained that the callers asking about the space have usually gone by the store and seen that it’s closed.

“They assume that the building is available, and they look up who owns it and call me,” Fisher said. “If they leave, somebody else will come in there, there’s no doubt.”

Recently, The Hemp Farmacy leased two other Front Street spaces that Fisher owns, previously the homes of a hot dog shop and The Cobbler’s Bench.

Before The Hemp Farmacy wanted the space, an eatery had planned to move in.

“I had two other people behind them that wanted that building,” Fisher said of the waffle restaurant that decided against opening a Wilmington location.

While some of the vacancies might be attributed to Hurricane Florence and the need to make difficult repairs, including the Port City Java at 21-A N. Front St. (which reopened Dec. 18), other storefronts had already been vacant for a while or are in limbo as RiverPlace, a mixed-use project under construction that has replaced the defunct Water Street parking deck, takes shape at the foot of Chestnut Street.

Other reasons could include pricing, Fisher said, without pointing out any specific locations.

“I do think that some of the downtown property owners have gotten a little overzealous with their pricing, and I think that you have to be extremely careful with pricing yourself to the point where a business can’t survive but for a short period of time,” he said. “Our philosophy has always been if you make the rent reasonable, the tenant can make a living and continue to pay rent.”

Office space in Wilmington remains a hot commodity, property owners said.
For example, Kessebohmer USA Inc., a leading manufacturer of high-end storage solutions for the kitchen industry, has been in Wilmington since about 2007, moving recently from Barclay Commons to the third floor of 1 and 9 S. Front St. in downtown Wilmington.

“We’re happy to be downtown. We have been here now for 12 years in Wilmington, but we moved our headquarters downtown because of the environment and the excitement to be here,” said David Ivey, managing director of Kessebohmer USA Inc., during a ribbon-cutting ceremony Dec. 6 at the new office space.

Ivey added, “We are a 60-plus-year-old company and growing. We have over 3,000 employees [worldwide], but Wilmington is a focal point for us … We’re going to grow, and we’re going to bring new jobs here for sure; if we get certain businesses up and running, we’ll even bring factory jobs, we’ll bring executive jobs.”

One issue that some buildings have faced, said architect Clark Hipp, who also owns property downtown, is a challenging repair environment that existed even before Hurricane Florence came along.

Contractor shortages already in place before the storm worsened afterward, he said, including for the critical roofing work that damaged downtown buildings have needed. At the same time, Hipp said, it’s hard for repair crews to work downtown because there aren’t big parking lots around the buildings in most cases.

Still, brokers and city leaders say the vacancies are momentary.

“If you consider the number of occupied storefronts and second-level businesses, the vacancy rate is very low,” said Joan Loch, a broker with MoMentum Companies whose office is in downtown Wilmington.

Loch, whose listing at 24 N. Front St. is under contract with local investors, said the vacancies don’t seem to be keeping people away from downtown.

“The restaurants and event venues are busy,” Loch said.

She said downtown and Wilmington itself continue to get notable mentions and top category honors from media regionally and nationally.

Asked if he thinks recent vacancies signal a slump for downtown, Hipp said, “I think that the retailers will feel it in the short-term, but no, it's not a long-term impact.”

Loch said she expects the vacancy situation to improve “with the reopening of those businesses closed due to hurricane damage, in addition to turnover of other leases when they expire. What needs to be acknowledged is the positive growth and investment in downtown, with large projects that are underway currently and smaller rehab projects of existing buildings.”

Ed Wolverton, president and CEO of Wilmington Downtown Inc., said a downtown commercial district will experience vacancies from time to time, especially after being hit by a hurricane that dumped rain on Wilmington for days. Nevertheless, he said, the majority of downtown businesses did reopen after the storm, and the vacancies are part of a normal business cycle.

“There’s always going to be some ups and downs that happen along the way,” Wolverton said. “There’s definitely some sensitivity with the downtown business community because of the storm and all the media attention really put forth a perception that all of downtown was flooded and in total disrepair … and that is just so incorrect. The flooding happened, but it was basically limited to Water Street.”

Wilmington might never be like Charleston, South Carolina, with big national chains filling up downtown, Fisher said, but the Wilson Center at Cape Fear Community College, for example, has been a game-changer, bringing in crowds to watch the performances. The planned North Waterfront Park will be another game-changer, he added.

“I think we have made it to that point in downtown that we have been looking to get to for decades, ever since the debacle of PPD not going where the parking deck was [a decision made in 1994]. That was the beginning of the decline,” Fisher said, “and I think we have passed that point in the last 10 years, and we’ve seen the investment of a lot of capital down here.”

Correction: This version has been changed from the print article to correct the description of the investors who have 24 N. Front St. under contract.