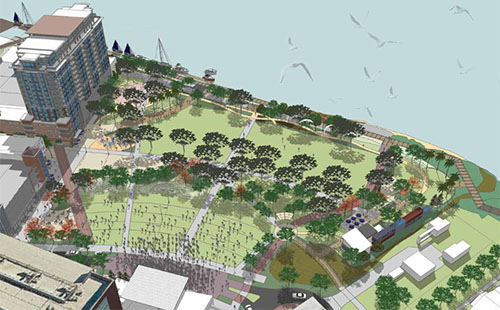 City council is considering awarding the contract to Raleigh-based Clancy & Theys, according to the city of Wilmington. The item is on council’s consent agenda Tuesday night.

The Wilmington office of Clancy & Theys is slated to run the development of the park, according to the agenda. If approved, services will include overseeing the design and engineering process and oversight/management during construction, city officials said.

Also in March, council adopted a resolution authorizing the construction manager at-risk project delivery method for development of North Waterfront Park. This method reduces the risk posed to the city by unforeseen challenges during construction, according to city officials.

The North Waterfront Park development is estimated to cost about $20 million. The development is being funded by the voter-approved $38 million 2016 Parks Bond. The bond will be repaid with a city property tax increase of 2.1 cents per $100 of property value, meaning a homeowner with a $200,000 house, for example, will pay $42 more per year.

In 2013, the city of Wilmington purchased the 6.3 acres of land for the park – located along the Cape Fear River north of the PPD building between Harnett and Cowan streets – for $4.1 million.

Six firms put in a proposal in response to the city’s Request For Qualifications (RFQ) for the services, from which three firms were interviewed, according to agenda documents. Clancy & Theys, along with Barnhill Construction Inc. and Rogers Builders Inc., were the top three firms selected for the city's interview process.

“All six proposals to the RFQ were high-quality submittals,” city officials said in the agenda documents. “The interview committee agreed that Clancy and Theys excelled in their demonstrated understanding of the scope of services.”