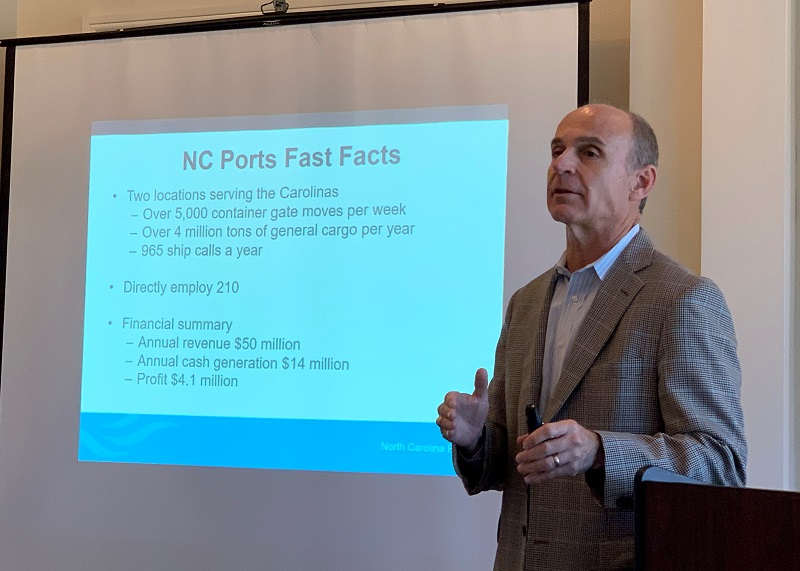 The Cape Fear Crossing project and other local and national topics were among questions raised by members of Cape Fear CREW during their monthly meeting Friday at Cape Fear Country Club.

The event had more than 40 guests in attendance with about 35 of those organization members, officials said. The local chapter of the group Commercial Real Estate Women, or CREW, brought in the ports' leader to give some insight on the port's role in the region.

Cozza touched on a variety of port topics, including its impact on the state economy, operations, capital improvement projects and its ability to compete for business among other ports on the East Coast.

He also said there is a need for more warehousing space locally for port business. He also expressed the need for a new crossing over the Cape Fear River.

The long-studied Cape Fear Crossing project was recently put on the shelf after the N.C. Department of Transportation took it out of its long-range plan.

The bridge project was being studied by transportation officials to find another way over the Cape Fear River to improve traffic flow and enhance freight movements from U.S. 17 and Interstate 140 in Brunswick County to U.S. 421 near the Port of Wilmington.

"We're open for anything that makes the flow of cargo and flow of transportation [better]," Cozza said.

The connectivity that a new bridge would provide is important to the area long term and to the Port of Wilmington, Cozza said, adding that he is not advocating for any specific pathway of the project, recognizing the impact it would have on some residents in Brunswick County.

He encouraged those in the audience to express concerns as well, mentioning movement in the area to bring attention to the scrapped project.

On a more national scale, Cozza said N.C. Ports is seeing some impacts from the recent tariffs that have been placed on certain Chinese goods.

The global tariffs system has been in place for many years, he said, and small changes typically take place for a variety of reasons. The more recent Chinese tariffs have been major changes to that system, Cozza said.

For those in the supply chain of big-name companies such as Lowe's Companies, HanesBrands or Walmart, the tariffs have shaken up a pretty traditional way of doing business, Cozza said.

Lowe's, which moves goods through the Port of Wilmington, is one of the top importers in the United States, he said.

"They have about 90% of their cargo they're importing into the U.S. coming out of China. So what do you think this is doing to their supply chain?" he said.

Some companies are looking to shift production to Southeast Asia, including Vietnam, he said, adding that it's hard for that country to fill the role of China.

"It would take about 14 Vietnams to be able to cover the production capacity in China," Cozza said.

The ports are a big economic driver and should be important to all Cape Fear CREW members, said Connie Ronner, vice president and commercial relationship manager with SunTrust Bank and the current president of Cape Fear CREW.

​Cape Fear CREW has a mission to advance the success of women in commercial real estate.

"I hope people ... will come away from this meeting knowing that [the port is] important to commercial real estate and all aspects of our economy here in Wilmington and Southeastern North Carolina," Ronner said.