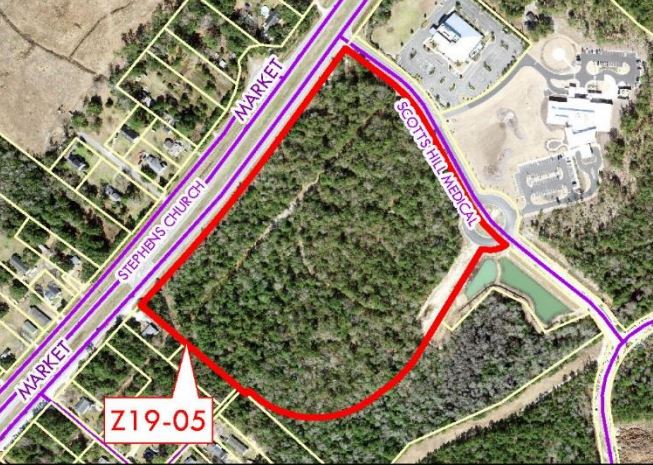 WPE Holdings has owned the land for many years and had previously approved plans to construct five office buildings as part of a medical office complex called Scotts Hill Medical Park, Nadeau said.

“We were going to create a medical office complex, rental space, satellite office, and that was back in 2007,” he said. “The plan was approved to fill the site with five buildings, but the project went on hold during the recession. Now, we are looking back trying to resurrect the project there.”

Plans to build a medical park ended because over the years the demand and trends in that zone have changed, with medical centers wanting their own building, Nadeau said.

“Ten or twelve years ago, there were far more medical practices but there has been tremendous consolidation in recent years. The remaining players are big, and we found that these are not folks who want to rent a small office in a large building; they want their own stand-alone facility,” Nadeau said. “What we envisioned and the market has changed where the demand is now for stand-alone buildings. So, the development will be much the same with office and retail uses, but the plan is to build the main road down the center of the tract and sell individual lots instead and the practices can do their own thing.”

Most of the land is in a conditional use district with a small section in the back zoned as residential.

The rezoning request will not have a drastic change on the purpose of the lot, Nadeau said.

“It is already zoned for office and retail; we are only changing the configuration. It is already permitted and structured for businesses,” he said. “It is really more of an added flexibility to meet the current demand for office space.”

Traffic will not be largely impacted because the requested rezoning is not meant for businesses that attract a lot of traffic, Naude said.

New Hanover County’s Planning Board Commission recommended the approval of the application April 4. The county’s Board of Commissioners will hold a public hearing on the request May 6 at 230 Government Center Drive, starting at 4 p.m.

If the rezoning request is approved by the board, the owners will start the initial phase of road building this year, and then create and finish the lots with the required infrastructure. Owners will also start marketing the spaces, Nadeau said.

WPE Holdings has been interested in the Porters Neck area because it has experienced growth, including the high number of permits in place for residential developments in the next five years, he said.

“We had grand plans for that site,” Nadeau said. “And we do think it will be a big benefit to the community to have medical services and potential retail which would help prevent people from driving to downtown to get set the services they need.”