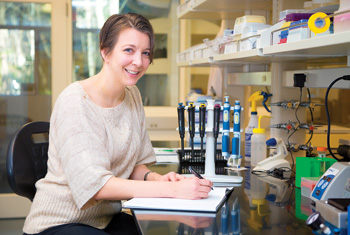 Jennifer McCall (above) and her husband, Sam, started Seatox Research Inc. to focus on shellfish testing. The company has received grants for its research with the possibility of more funding to help find a commercial partner. (Photo by Chris Brehmer)
Even now, as she sets out on a career in science, Jennifer McCall must keep part of her brain in business mode.

Her startup, Seatox Research Inc., moved into a one-bay laboratory at University of North Carolina Wilmington’s MARBIONC facility in November, when the year-old company was ready to start its research. The company consists of McCall and her husband, Sam, also a biologist. The two work collaboratively with UNCW research scientist Andrea Bourdelais, who is based at MARBIONC.

The McCalls are trying to develop a faster, easier-to-use process of testing shellfish for marine toxins they may have ingested. Such toxins can contaminate the food supply, causing significant harm to anyone who eats the shellfish. Currently, the time-consuming test involves injecting lab mice with radioactive chemicals and monitoring their health status.

If Seatox’s researchers can create a “canary in the coal mine” molecule that is able to detect the presence of poisons – as the McCalls believe they can – the resulting test will speed healthy shellfish to market.

So, while Seatox is firmly grounded in laboratory research, she added, the company must also focus on its commercial prospects and operate in a businesslike way.

The company’s startup phase is funded in part by a federal Small Business Technology Transfer (STTR) grant through the National Institutes of Health. The grants are designed to enable small businesses owned and operated by U.S. citizens to engage in research and development that has a strong potential for commercialization.

In late summer of 2014, Seatox garnered a Phase 1 STTR grant – awards of up to $150,000 that give early-stage companies a year to prove their concept. Half the grant money goes to the McCalls; the other half goes to the institutional partner: in this case, UNCW, represented by Bourdelais.

Seatox’s other funding source is a $50,000 Innovation Grant from the state, awarded in November. These grants are available only to in-state companies that have obtained an STTR or Small Business Innovation Research (SBIR) grant.

If Seatox succeeds in proving its concept, it will be eligible for a Phase 2 STTR grant, which can total up to $1 million and cover research for up to two years. The activities in Phase 2 are designed to prepare the grant recipient to find a commercial partner and prepare its concept or product for the market.

STTR and SBIR grants are competitive and notoriously difficult to secure. Yet Jennifer McCall landed one on her first try.

A potentially useful product and a clear scientific path were helpful to the success of her grant application, she said, but so were her writing skills.

As a biology major at University of North Carolina at Chapel Hill, Jennifer McCall took a creative
writing class.

“I had to plead my case with my instructor [to be allowed to take it],” she said. “It was one of the most helpful non-science classes I ever took, because it helped me understand how to construct a story.”

She met her husband at University of North Carolina at Charlotte, where she earned her master’s and doctoral degrees. They then moved to Wilmington, where she spent three years as a post-doctoral student working in the university’s translational science lab and enrolled in UNCW’s professional MBA program.

That program helped her think about running a business. She also had to take a personality test.
“When I started the company. I wanted to involve my husband,” Jennifer McCall said. “You would think, being married, you would naturally network with your spouse, but that’s not necessarily what happens. He’s the facts; I’m the brainstorming. That personality test helped with putting on business co-owner hats as opposed to our married-partners hats.”

Seatox is on a “high risk-high reward” path at present, with everything hinging on the team’s ability to develop just the right molecule that can indicate the presence of toxins quickly, accurately and in an easy-to-use process. Jennifer McCall believes her effort is on track.

“I’m optimistic that we can prove our concept, but we can’t force it,” she said. “There is one keystone ingredient in the mix we have to get right.

“If our formulation is correct, then we’ll do Stage 2 to make our platform stronger, make the test easier, tweak things,” she said. “Our final goal is to get FDA approval for the test. To have maximum benefit [to the seafood industry], we need FDA approval.”

Inside MARBIONC
Seatox Research occupies one laboratory bay in UNCW’s MARBIONC building, located at the university’s CREST Research Park. The building, completed in mid-2013, is now about 75 percent occupied, according to university officials. Currently, Next Glass is leasing laboratory space in the building, although the company will move to new headquarters in downtown Wilmington later this year.

Several additional companies are in the lease-signing process, according to university spokeswoman Tara Romanella.

One early tenant has moved out of MARBIONC temporarily. Ocis Biotechnology is in a grant-applications phase and has moved its operations to UNCW’s Center for Innovation and Entrepreneurship but expects to move back.