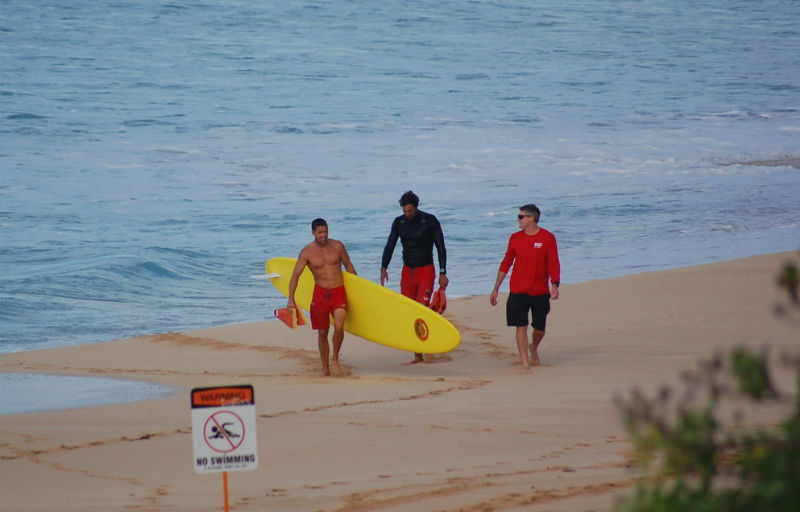 P2P Rescue founder and owner Cliff Ray walks with North Shore Lifeguard Kai Hall testing the latest surf rescue design in Hawaii. (Photo courtesy of Cliff Ray)
A Wilmington-based company was named one of six companies in the state recognized by the 2018 Governor’s Export Awards, according to a news release.

P2P Rescue, a company that makes water and ocean rescue boards, received the award for Top New Exporter, according to a news release Tuesday from the Economic Development Partnership of North Carolina's (EDPNC).

“The EDPNC’s international trade team has helped each of these companies in a variety of ways,” John Loyack, the group's vice president for global business services, said in the release. “We provide export-education workshops, market research, market-entry strategies and more. We accompany North Carolina businesses to trade shows around the world, administering funds that can reimburse their trade show travel costs. We also help companies find new international distributors at trade events.”

The local company, founded by Cliff Ray in 2014, has used travel funding administered by EDPNC to participate in trade conferences in Canada, Brazil, Australia and the Middle East, where the company has connected with international distributors, officials said in the release.

P2P Rescue designs, manufactures and sells water safety and ocean rescue equipment for lifeguards, fire departments, resorts and universities around the country and is starting to gain a presence in its international reach, Ray said Tuesday.

“We're currently endorsed as the only entity as the official rescue board of the U.S. Lifesaving Association," Ray said about the nonprofit professional association of beach and open water rescuers.

Ray said the company has sold to more than 50 lifeguard agencies and fire departments around the country in the past two years. It recently started exporting its first boards to Canada.

Ray said exporting is something that is new to the company.

“We started exporting last year. And so we’re making those inroads into some of those countries so we can begin exporting into them,” Ray said. “Since we were honored … by the USLA in the spring of 2018, our revenues and sales have doubled in that time.”

P2P Rescue has also exported its boards to Australia and New Zealand, where the boards are undergoing final testing by the countries' national lifesaving organizations so that P2P Rescue can begin official sales there, Ray said.

In 2019, the firm has prospects selling in the United Arab Emirates and Saudi Arabia, he said, adding that the nations have a growing coastal tourism market.

Here in the U.S., the company's biggest market is in Hawaii.

"I think one of the unique things about what we do is we custom design surf rescue boards for the varying coastlines around the world," Ray said. "We don't believe that just one surf rescue board design or shape can serve the various coastlines."

Over the past two years the company has developed several different rescue board models for different coastlines, Ray said.

"We've built them and designed them in conjunction with working with lifeguard agencies, fire departments and the people -- the first responders on the actual frontlines putting their lives at risk -- and we've worked with them to help design boards that specifically work for their water conditions to make rescues," Ray said.

P2P Rescue, which has two employees, handles the sales and the manufacturing of its boards in a 7,000-square-foot facility in the Dutch Square Industrial Park. The company moved operations there in November after its original warehouse space near the port flooded during Hurricane Florence.

EDPNC officials, citing the Brookings Institution in Washington, D.C., said in the release that more than 400,000 jobs in the state are supported by the export of goods and services in North Carolina.

Other companies that received awards are Unifi Inc. in Guilford, Yadkin and Rockingham counties; Advanced Detection Technology in Iredell County; Bernhardt Furniture Co. in Caldwell County; National Wiper Alliance in Buncombe County and ImmunoReagents Inc. in Wake County, according to the release.