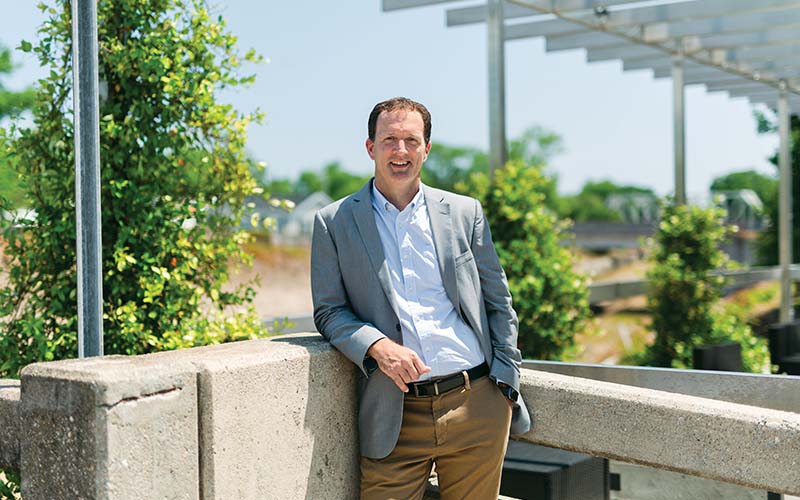 Since 2003, StepUp Wilmington (formerly Phoenix Employment Ministry 2003-2015 and Phoenix Hometown Hires 2015-2018) has served people affected by unemployment and underemployment. Often the challenges of incarceration, homelessness, recovery and/or domestic violence have kept candidates from reaching their goals, and StepUp works to help them transcend such barriers.

“In Wilmington and the Cape Fear region, we work with people to get them stable employment and get employers good employees, and get good wages for people to shelter themselves,” executive director Will Rikard said. “We train and work with individuals working and living on the crisis line. Their car breaks down and they fall back into a place of unemployment. The pandemic exacerbated that.”

Like most organizations, StepUp was forced to adapt to the pandemic. The organization focused on training online, which was a “great thing for us that we have that capacity, but half the people we work with are internet insecure, and while we created an opportunity, we excluded people who couldn’t access the Zoom because their signal was not strong,” Rikard said.

So Rikard and his team kept refocusing on what was important and checking in with the most vulnerable. StepUp got a grant from the city of Wilmington to purchase and deliver food to those in need.

It partnered with other nonprofits to identify families in need, as well as families who were served by StepUp that had been impacted by the pandemic; in addition, StepUp officials utilized their job placement directory to find delivery drivers.

With those federal government funds, New Hanover County has allocated $650,000 to be administered in partnership with StepUp Wilmington to establish two jobs programs. These include paid job training and a placement program for 100 to 200 people, and a six-month paid internship and job placement for an additional 20 people to develop long-term skills and employment.

“We work on soft and hard skills in order to gain long-term sustainable employment,” Rikard said. “We are currently waiting on final guidelines and the release of funds from the federal government.”

Rikard also said that this past year has brought needed attention to the racial inequities.

“Wilmington has a 23% poverty rate of which 41% are African Americans. That’s a disproportionate amount of people living in very challenging conditions, and our focus is on changing that dynamic,” Rikard said.

StepUp’s job placement division has two full-time employees who work to establish relationships with employers to hire their graduates and “see the value in our trained, jobready workforce,” Rikard said.

Those relationships continue after the job placement has been made.

“We support that person after the fact and we strengthen those relationships to improve businesses with a diverse group of talent,” Rikard said.

For those looking for jobs, StepUp is “open-ended” about who they serve and what they are looking for, as there are no excluding factors as far as who they are willing to help; however, the more vulnerable populations tend to be their focus. About half their clients are people with criminal histories, and a quarter of them have felony convictions.

“A big focus, one of them, is supporting them moving forward and put the past behind them,” Rikard said. “We advocate for them. That should not be a defining characteristic or fact of why they shouldn’t be hired. Their criminal history is just that, history. Many of them come from circumstances that things have happened and it’s time to get back to work.”

StepUp has a strong referral network of candidates, most coming “through word of mouth, a friend, a relative, a neighbor, while others come to us through the United Way, churches, the YWCA, key partnerships that we check in with on a weekly or monthly basis. We have consistent, communicative relationships, which we are always building through our local partners,” Rikard said.

Rikard became interested in working for StepUp after working as an organizer in New Bern for the Obama campaign in 2012.

“During my time in New Bern and the interactions I had with thousands of residents, I saw the lack of opportunity that existed for far too many people, especially people of color, and was determined to work to change that and see that all people have the opportunity to work and live stable, happy lives,” Rikard said. “I wanted to work for that change outside of politics and build off my experience in recruitment. StepUp was the perfect place to do that.”

The StepUp Wilmington office is currently within The Harrelson Center, but StepUp officials are in the process of looking for an outside space to allow for its growth and evolution.

For interested employers, StepUp works to find the right skills and experience to suit their needs. Job training works on helping candidates get a job and succeed in that job.

They also work with candidates to develop resumes and practice interviewing, as well as work with Cape Fear Community College to connect candidates with the training they need and want.

“We work to find the talent to grow a business,” Rikard said. “Reliability is the No. 1 trait that employers want.”