By Johanna Cano, posted Aug 26, 2019
Tweet
Wilmington Area Rebuilding Ministry (WARM) has purchased 3.5 acres of land on Market Street which will house its office, warehouse and a new lodge space, according to a news release Monday.

The tract at 6955 Market St., near the intersection of Market Street and Military Cutoff Road, will help the home repair and rebuild nonprofit meet the demand for Hurricane Florence recovery and affordable housing preservations services, the release stated.

“We bought the building that we are in now three years ago, but we have already outgrown it,” said JC Lyle, executive director of WARM, about its current 5058 Wrightsville Ave. location. “There is such a demand and the housing stock is aging. The storm a year ago really increased demand for services; it also increased the amount of funding and volunteers. Right now, we are limited on what can do in our current location.” 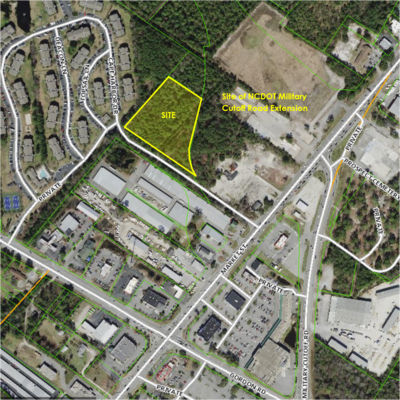 The new space, purchased for $500,000, will allow the organization to streamline work more efficiently and its access to major roadways makes it convenient for the nonprofit, which serves Brunswick, New Hanover and Pender counties, Lyle said.

Plans for the new campus include three buildings: an office space, warehouse and lodge.

The warehouse is larger and will allow the organization to accept more donations, hold training events and provide space for pre-build work.

The lodge will house 80-100 bunks, a commercial kitchen and assembly/dining space for volunteers. It will also be used by churches and nonprofits for retreat and event space and house relief workers in the aftermath of a hurricane, according to the release.

While construction timelines will be dictated by grants and capital campaign funding, the goal is to have the office space ready to move in by the end of next year, Lyle said. WARM then plans to construct the warehouse and finally the lodge.

The purchase of the 3.5-acre land was aided by an unnamed donor, according to the release.

“During her lifetime, this hard-working, compassionate woman made the visionary choice to purchase trucks, trailers and other capacity-building items,” Lyle said of the donor in the release. “She was a true philanthropist because she not only helped people with urgent needs, she equipped WARM to serve more people every year. The impact of her giving will be felt for years to come.”

WARM currently has a waitlist of 200 families who are needing a range of repairs on their homes from roof to plumbing to heating and air repairs, a mix of hurricane relief and low-income applicants.

Last year, the organization helped 121 families, while this year so far, it has helped 120, Lyle said.

In storm-related repairs, the nonprofit has completed 70 hurricane recovery builds since Florence, with another 22 currently underway.