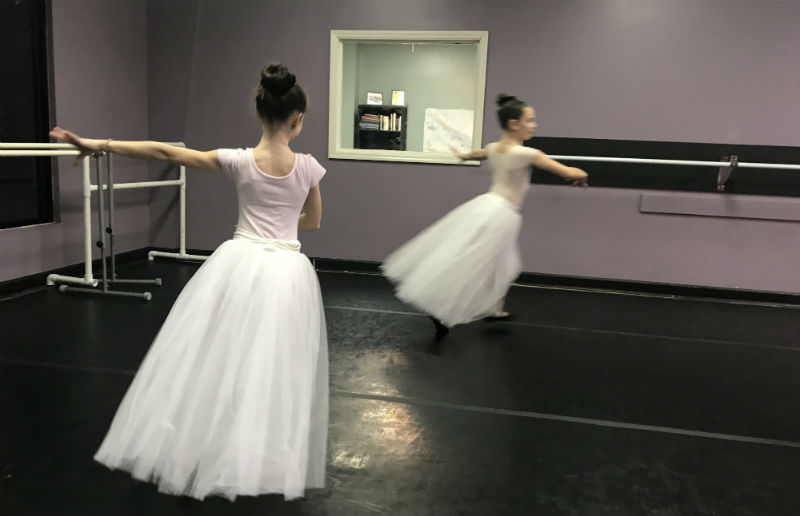 Students dance during a ballet class at the Dance Cooperative's previous location off Carolina Beach Road. The nonprofit is moving classes to the Nir Family YMCA. (Photo by Cece Nunn)
The Dance Cooperative is moving its dance classes to the Nir Family YMCA, in a partnership that will allow more Wilmington residents to be able to access dance classes, said Sue Meier, ballet instructor at the studio.

Teen and adult classes will move from the cooperative's studio at 5202 Carolina Beach Road to the YMCA facility at 2710 Market St. on April 1.

Kid’s classes will be at the Hannah S. Block Community Arts Center on Second Street in April and May and will move to the Nir Family YMCA in the fall.

Officials with Dance Cooperative decided to move from their Monkey Junction space to be more centrally located, Meier said.

“We were interested in moving closer to the downtown area and at the same time we were approached by the CEO of the YMCA [to see] if there was a chance to offer dance at the YMCA,” she said.

The Dance Cooperative will remain a nonprofit and dance class payments can be made through the YMCA website. Like other classes offered at the YMCA, members of the YMCA will get a discount when signing up for dance classes.

The cooperative will not have to pay for its use of class space, said Corey Maarschalk, youth branch director with the YMCA of Southeastern NC.

The partnership will allow the Dance Cooperative to reach people who might not afford or might not have known about the opportunity of taking dance classes, Meier said.

“Part of the mission of the cooperative is to make sure dance is available to everyone regardless of their socioeconomic status,” Meier said. “About 30 to 35 percent of our students are on scholarships, but we are still missing part of the population. At the Y, it will be easier for families to get their kids there.”

Both students and instructors are excited about the new class location, noting the recent renovation of the Nir Family YMCA, Meier said.

The YMCA of Southeastern NC has had an increase in membership enrollment since its new location opened in December.

"We both have similar missions in wanting to reach families, kids, wanting to serve a broad audience, and dance fits with what doing in terms of health and wellness at the Y," Maarschalk said about why officials approached the partnership.

The YMCA will market the classes to its members in hopes to reach more parents and interested dancers, he said.

Over the past couple of years, the YMCA of Southeastern NC has expanded its presence in the city, including its operations of three City of Wilmington pools, which has allowed the pools to remain open for more hours and provide more programming, according to the city of Wilmington's website.

With the new Dance Cooperative location at the Y, there is an opportunity to add more dance classes, she said.

“We are hoping people will come and check out our classes if they had not taken one before,” Meier said. “I think over time it will grow, and we want to get a feel for it in the first year.”