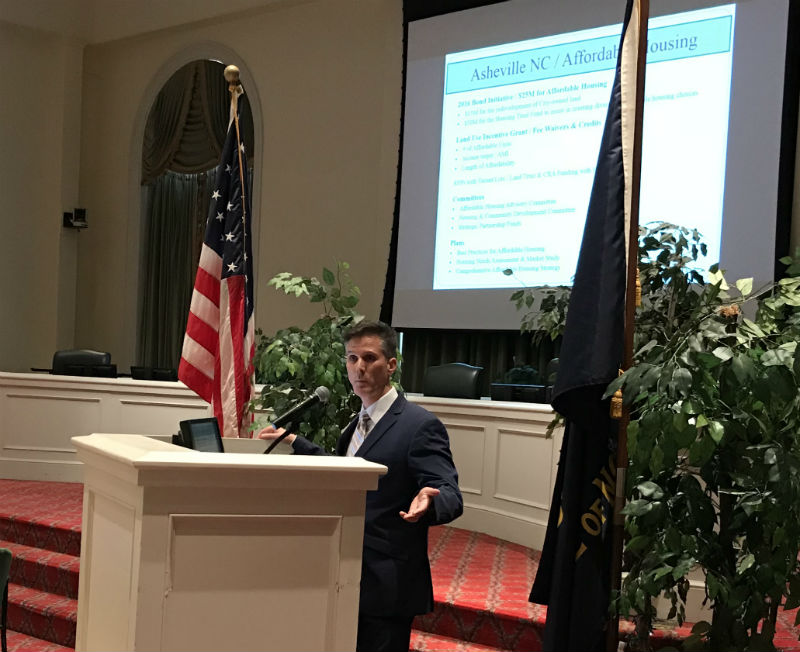 Paul D’Angelo, outgoing chairman of the coalition, said for the Wilmington area, the math isn’t working for a growing majority of New Hanover County residents when it comes to affordable housing – the definition of which is housing that doesn’t cost more than 30 percent of a person’s income when utilities and other costs are included.

That’s a problem, he said, because “the more we spend on housing the less we have to spend on the local economy.”

In addition to highlighting local efforts, he pointed out some of the ways other communities in North Carolina and South Carolina have been addressing the concern, including:

GREENSBORO: For the past several years, the city of Greensboro has dedicated about one cent of the property tax rate to ensure that Greensboro has a reliable source of funding for its housing programs. “The fund allows Greensboro to pursue long-term planning and get ahead of the growing problem they see around them. Annual income into the fund is estimated to be $1.3 million,” D’Angelo’s presentation said.

DURHAM: The city dedicates 2 cents of its property taxes, which adds up to about $5.4 million a year, to housing, D’Angelo said.

ORANGE COUNTY: Voters approved a bond referendum in 2016 for $5 million, part of a $13 million plan to use local, state and federal money to house 1,000 families and individuals in the following five years.

CHARLESTON, SOUTH CAROLINA: The city approved a $20 million affordable housing bond last year to preserve and create housing affordable to low- and moderate-income families, and the housing authority there is committing up to 250 housing choice vouchers in support of the bond. The city also passed a Mixed-Use Workforce Housing Ordinance and enacted a housing percentage requirement for Planned Unit Developments, D'Angelo's presentation said. A developer can build more units and have less parking requirements, but in exchange, they need to allot up to 20 percent of the units to affordable housing or opt out and pay a fee that would go toward funding more affordable housing.

Statewide, efforts to address the problem these days have become a situation where officials are treading water, said Samuel Gunter, director of policy and advocacy for the N.C. Housing Coalition. Gunter was one of the featured speakers at Thursday's event along with Mel Jones, a research scientist at the Virginia Center for Housing Research at Virginia Tech.

Gunter said the recently passed federal tax reforms had an impact on affordable housing projects long before they were approved. A reduction in corporate tax rates means a lower value to potential investors for Low Income Housing Tax Credits, a program that helps offset the costs of building affordable housing in North Carolina and across the U.S.

Late last year, “affordable housing developers who had already been awarded [Low Income Housing Tax Credits] but had not yet secured financing were seeing six-figure gaps in their budgets just on the thought that maybe tax reform would happen,” Gunter explained. “We were backfilling 2016 deals with 2017 credits to make those numbers work.”

In 2016 in North Carolina, there were 46 LIHTC developments approved for 3,243 units and another 13 in bond deals for 2,163 units, Gunter said. Those numbers dropped to 32 LIHTC projects and 11 bond projects for a total of about 3,000 units last year.

“Right now, we’re estimating a 16 percent decrease nationwide in affordable housing production because of the loss of value in the tax credits,” Gunter said.

With more than a million households in North Carolina falling in the cost-burdened category (meaning they pay more than 30 percent in housing costs), adding a few thousand units isn’t keeping up, he said.

“We are fighting to preserve something that doesn’t even get us close to the scale of the need,” Gunter said. “So that’s our challenge, right? We’ve got to figure out how to plug that gap.”

Jones said that a statewide study she helped lead of Virginia’s shortage looked at how housing and economic development are related.

The study looked at direct relationships and softer impacts.

“If you pay more than 30 percent of your income for your housing you might be making choices between housing and other things you need” such as food and medical care, Jones said.

Ten-year estimates put Virginia’s job growth potential at 350,000 jobs being added, “but that is only if we can provide 225,000 appropriate affordable housing units. We won’t have the economic growth that we could have, we won’t achieve our economic potential, without housing.”

The moment households aren't cost-burdened anymore or the lower they go under that 30 percent, those with children tend to spend any money they have leftover on educational enrichment activities, Jones said.

"Our children are our future workforce. If parents can't invest in them, our future economics are at risk," Jones said.

She said the ongoing reduction in federal dollars for housing development and programs "leaves this burden with state and local governments."

Read more about some local efforts to address the area's shortage of affordable housing in Friday's edition of the Greater Wilmington Business Journal.