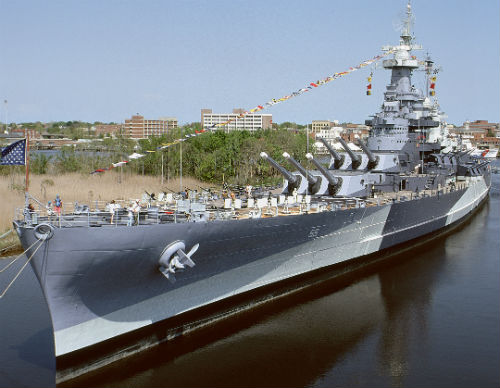 A $500,000 allocation from the state will allow the Battleship North Carolina to make preparations for badly needed repairs to its hull, a news release from Gov. Pat McCrory announced Thursday.  The funds will come from the N.C. Office of State Budget and Management’s Repair and Renovation Contingency Reserve.

While the money will not cover the cost of the repair itself, it will allow officials to decide how to create the dry environment that will allow workers access to the hull.

“These funds will begin the permitting and engineering portion of the USS North Carolina Battleship hull repair project,” Capt. Terry A. Bragg, USN (Ret.), executive director for the battleship, said in the news release.

In an interview Thursday, Bragg said that battleship officials plan to build a cofferdam – a  temporary impermeable enclosure for the ship that will create a dry work environment- around the ship.

“It will be like the sheet pile wall that’s being used at the marina project next to the convention center,” he explained. “We have a company coming in to do core borings from 40 to 70 feet deep to determine the holding power of the soil [around the battleship] so we can build the equivalent of a sheet pile wall. Then we’ll pump [the enclosed area] dry and cut steel sections out of the hull and weld replacement sections into place.”

Bragg said that a $2 million project in 2011 made repairs to the ship’s starboard bow. Now the port bow and sections of the stern need replacement. Because of the curvature of the stern, the technique used to create a dry environment on the starboard bow in 2011 will not work, he said, necessitating construction of the cofferdam.

In an interview last March, Battleship North Carolina’s assistant director Chris Vargo, USCG (Ret.), said that during those repairs to the ship’s bow, officials became certain that other portions of the hull were in bad shape as well.

“Ships are meant to be pulled out of the water every few years and inspected. The last time the North Carolina was pulled out was in the late 1940s, before it was mothballed,” he said at the time.

The battleship, designed to serve as the state’s memorial to its World War II veterans, was towed to its new home at the Cape Fear River dock in 1961 and dedicated in April 1962.

According to the release, the USS North Carolina Battleship Commission was notified by the U.S. Navy  in July 2009 that it needed to either develop a viable plan for the future dry-docking of the vessel for repairs or plan for the ship’s eventual disposal.

The Battleship North Carolina is self-supporting and relies primarily upon admissions, sales in the ship's store, donations and investments. No funds for its administration and operation come from appropriations from local, state or federal government.

Bragg said that the battleship’s most recent fiscal year, which ended Sept. 30, was its most financially successful to date.

“We also have a  recently completed economic impact study done by the Kenan-Flagler School of Business at UNC Chapel Hill that says the battleship created $240 million in economic activity in the Wilmington-New Hanover County-Brunswick County area over the past decade,” he said.

Apparently the governor’s office is paying attention to statistics like these.

"Our administration values the wealth of North Carolina history that hinges upon the upkeep and support of the Battleship North Carolina," McCrory said. "We are committed to supporting thorough and efficient repairs of this storied ship."