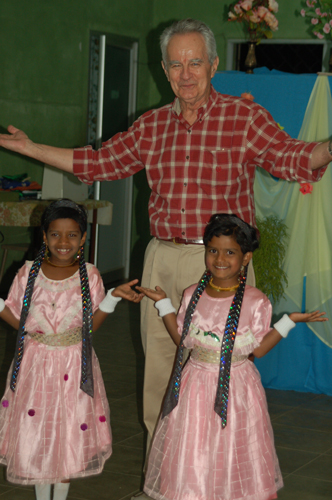 In 2006 Paul Wilkes was traveling in India with his wife Tracy when he came across a group of Salesian nuns running an orphanage. After meeting Reena whose eye had been gouged out when she lived on the streets, in order to make her “a better beggar,” Wilkes decided to get involved.

He began by contacting people within his own circle, and that circle has grown into the Homes of Hope organization. With support from all over the world, HOH not only built a new orphanage for Reena and her friends but helped fund two more orphanages. HOH has also purchased computers, books, medical supplies, wells, water purifiers, farm animals, diesel generators and addressed many other needs in what Wilkes calls the HopeZone.

In five years, Wilkes has raised more than $1 million, without holding any fundraisers.

GWBJ: The amount of money you have gathered for Homes of Hope is very impressive, could you tell me more about your fundraising methods?

PW: My idea of fundraising is to go to places that are predisposed to help you -- simple as that. First, the orphanages are Catholic, so we went to Catholic parishes. Next—every one of these places has terrible water problems. Rotary [International] is very interested in water, so I go to Rotary for grants. Then, PPD is in Wilmington. PPD also has an office in Bangalore, which is the center for our province. PPD is in health services. Our girls have awful health problems. So, PPD employees have visited our orphanages, donated money, and “purchased” a marching band. PPD bought an entire set of instruments for these girls to play—which has greatly helped their self-pride.

GWBJ: So what is PPD’s incentive to help HOH?

PW: I think it is a combination of corporate responsibility and good business practice. PPD wants to have a presence in India, they want good relations in that country, and the corporate office wants their worldwide employees to work within the countries they are in. So it’s a perfect setup.

GWBJ: Could you tell me about the books you have sold on Amazon?

PW: We collect used books and we have made about $50, 000 over four years. And people find us through that and become supporters. It is stated on Amazon that the funds are directed to Homes of Hope, and we stick a brochure in every book we sell.

GWBJ: You seem very focused in your efforts.

PW: That’s the key to this kind of thing, I think. I try to be organized and thoughtful. I have a motto in life: “Make it easy for people to be good.” I am opening a door; all you have to do is walk through it. You don’t have to find it; you don’t have to find the street that it’s on. I’m taking you to the street; I’m taking you to the house and saying, “Would you please walk through?”