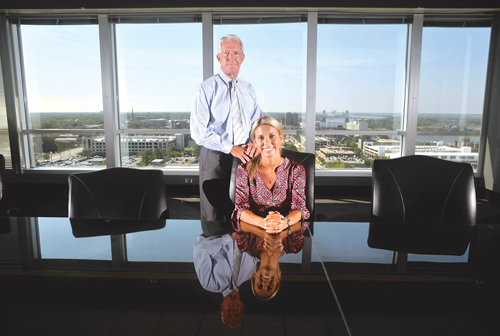 PPD, Inc., founder Fred Eshelman and his daughter Kimberly Eshelman Batten are pursuing a higher profile for the Eshelman Foundation after "staying under the radar" since its founding in 2008.

Compared to Greensboro and Charlotte, Wilmington has fewer grant-giving organizations and private foundations.

“As far as local grantors, I don’t think there is a significant amount compared to the immediate needs in the Wilmington metro area,” said Bob Jones, Association of Fundraising Professionals Cape Fear region board president. “I think the needs are greater than what is out there.”

One family foundation was established in 2008 by PPD founder and Executive Chairman Fred Eshelman and his daughter, Kimberly Eshelman Batten. Batten, 26, is the executive director of the Eshelman Foundation, which was established to give grants to non-profits that address children’s health and educational needs.

While studying at the University of North Carolina at Wilmington, Batten began talking about establishing a private family foundation with her father to combine her passion for philanthropy and children. She studied elementary education until switching tracks her junior year to business.

“I decided that I think I wanted to [help children] on a broader spectrum. My dad and I talked about the foundation. And I realized if I am going to do this, I really need to switch to business to have a business background,” she said.

The foundation has given about $663,000 total in five rounds of grants since 2008. But this was the first year the foundation announced its grant recipients.

“In the early days, we wanted to get our feet under us - getting it organized, straightened out before we got an onslaught of requests,” said Fred Eshelman.

Previously, the Eshelman Foundation received about three to five grant applications, but now it receives about 10 to 15. The total amount given in each fall and spring grant cycle is about $100,000 to $200,000. The majority of the funds come from the Eshelman family.

“We’re under very strict rules as to how we raise money other than family money,” Eshelman said. “So if it’s a good year, we can put in more than bad years.”

“What I do as executive director, I meet with each organization. I do site visits and then if I feel like what the organization is doing matches with our mission and vision, then I will send them a grant application,” she said.

“How we raise money, how much, from whom, and all that kind of stuff is pretty strictly regulated,” Eshelman said.

Private foundations are not allowed to solicit public funds, orhave fundraising events or galas in the way that public charities and non-profits can.

For the grant application process, Batten conducts site visits to see if a non-profit fits within the mission of the Eshelman Foundation. If it does, she will invite them to apply for one of two annual grants due April 15 and October 15.

“[The site visits are] one of my favorite things to do, because the application is a lot of financials and a lot of words, but when you can see it in action, you can really get a sense of how they are helping,” she said.

Plus, it offers the foundation another view of the area’s non-profit organizations. However, some of what is revealed through the application process is frustrating, according to Eshelman.

“We get applications for a lot of things and we look at them and think, ‘Why are you people not coordinating? You’re duplicating and wasting, in my estimation. Whereas if you get together and concentrate, you could have a lot more effect, I think,’” he said.

“We think it’s just so diffused and scattered and uncoordinated in Wilmington.”

He said the foundation would consider funding a needs assessment to help remedy this.