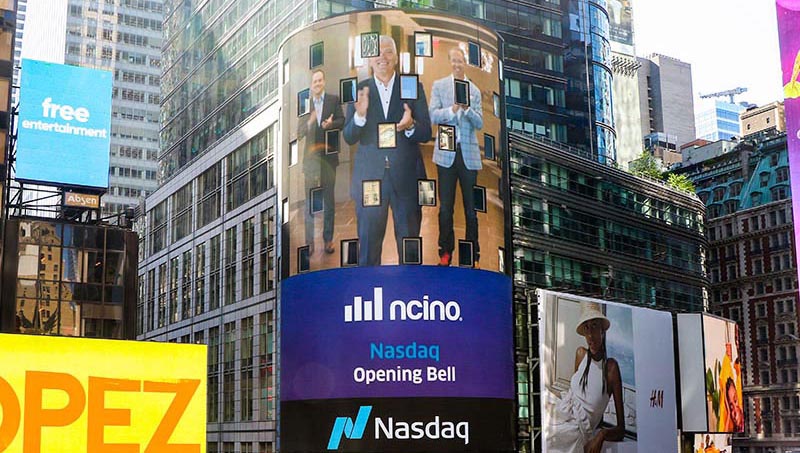 After pricing its shares last night at $31 per share, the stock began trading Tuesday around $80. It closed at $91.59, up nearly 200%. About 7.8 million shares changed hands during the first day of trading.

“Going public is an incredible milestone for nCino and we’re proud of all we have accomplished over the past 8.5 years, but we’re just getting started," company CEO Pierre Naudé said Tuesday via email. "Now more than ever, financial institutions are beginning to understand the digital transformation imperative, creating a compelling market opportunity for nCino.

"Entering the public market is an opportunity that can allow our company to responsibly invest in growth, and strengthen our ability to remain focused on our core mission and vision — to transform the global financial services industry through innovation, reputation and speed,” he added.

Nine-year-old nCino, which had $138 million in revenue in its most recent fiscal year, is now valued at close to $7 billion.

By comparison, Live Oak Bank, which spun out its technology unit as nCino in 2011, is currently valued at close to $600 million.

Late Monday, the company sold more than 8 million shares to investors, raising nearly $250 million ahead of Tuesday morning’s initial trading on Nasdaq. Underwriters have the option to purchase an additional 1.2 million shares within 30 days.

The fact that institutional investors had such appetite for the stock ahead of nCino’s Nasdaq listing was a good indication of things to come, said Pete Heckmann, managing director for equity research at D.A. Davidson & Co. – Equity Capital Markets. He compared earlier projections of nCino valuation with likely revisions based on today’s share prices.

“We don’t know where all of the forecasted figures might shake out but if we estimate the company should have around 93M shares outstanding post IPO, the $31 pricing would have meant a market capitalization of about $2.88B,” he said in an email Tuesday afternoon. “If we projected 35-40% revenue growth over FY20, that would produce a forecasted range for FY21 total revenue of $187M-$193m.

“With an estimated $325M in net cash on the balance sheet, this would suggest an enterprise value (which equals market cap minus net cash) of $2.56B.”

Heckmann explained that a common valuation measure in the software industry is enterprise value divided by next year’s forecast total revenue.

“At the $31 level, nCino was valued at roughly 13.6 times forward revenue,” he said. “This isn’t too far off from the valuations of some other small-/mid cap software names like competitor Q2 Holdings Inc. (trading at 12x revenue) or APPF [a provider of software to the real estate and legal markets] (trading at about 15x).

“With the surge today, however, the current $82 price has driven the stock to a significant premium valuation compared to many other software names in the FinTech space,” Heckmann added. “It may be that investors are thinking nCino can grow quite a bit faster than [its projected] 35-40% rate in FY21, or that the company can grow at a faster growth rate for a long period of time. [The surge] certainly signals a lot of enthusiasm for the name.

Seven banks are underwriting the deal, led by Bank of America and Barclays.

Check back for updates on this story.