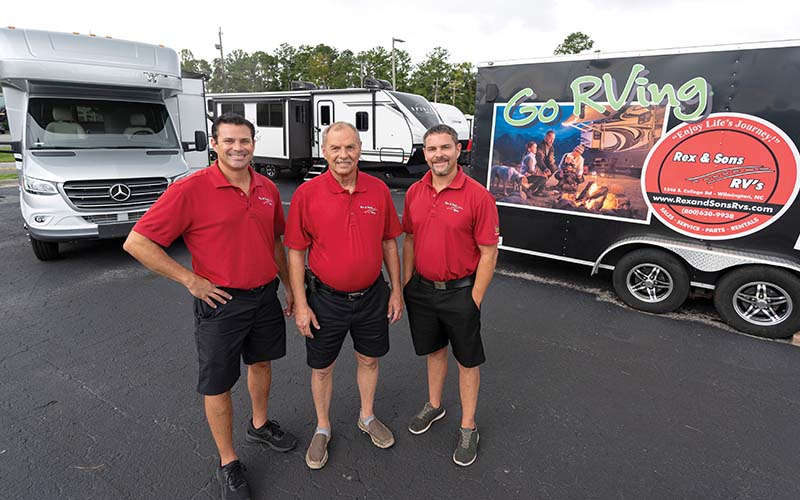 Travis Creech, Rex Creech and Jonathan Creech have seen an increase in business at their family’s dealership in Wilmington, Rex & Sons RV. (Photo by Michael Cline Spencer)
In the uncharted era of traveling during the COVID-19 crisis, vacationers in record numbers are choosing recreational vehicles as their preferred means of travel.

Limitations resulting from the novel coronavirus have “opened the eyes of people who never thought about [traveling by RV] before,” said Travis Creech, operations manager of Rex & Sons RV in Wilmington. “It’s not cool to leave the country, but it’s really cool to leave the house, leave the bubble. RVing is freedom and convenience and gives people freedom to explore.”

Creech’s observations are echoed in a June 5 report by the RV Industry Association (RVIA). Summarizing its recent survey findings, the RVIA stated that 20% of survey respondents in the U.S. “are more interested in RVs as a recreational travel option in the aftermath of COVID-19 – the highest of any option tested.”

The report added that 51% of survey respondents planning to make an RV trip this year said that current concerns about the coronavirus increased their interest in RV camping.

Creech is seeing that new interest at the dealership founded by his father in 1997.

“There have been the most first-time RVers I have encountered in the almost 23 years I have been in the industry,” he said.

“We were showing units virtually and by appointment,” Travis Creech said. “We were also selling parts and accessories.”

Still, late April and May were slow. But as travel restrictions eased, demand increased for both rentals and sales of motor homes and towable units. Travis Creech estimates that business is up about 10% now.

As existing RV owners dusted off their units and ordered new parts or accessories, and more people decided to try RVing, supplies dwindled.

“We’re low on inventory – lower than when we started in business in 1997,” Travis Creech said.

Some manufacturers shut down in March and April, and now must have fewer people on the production line, according to John Howard Jr.

“There are also supply chain issues, especially for parts coming from China and Mexico,” said Howard, the company’s president and co-owner. “It took us three months to get a replacement air conditioning unit. Suppliers are still trying to get geared up.”

Although the shipment of RV units to dealers in the first half of 2020 was down nearly 19% over the same period in 2019, the RVIA states that production is ramping up.

“RV wholesale shipments tracked by the RV Industry Association posted their best month in [June] 2020 and the highest monthly total since October 2018 as deliveries to retailers reached 40,462 units in June, a 10.8% rise over the June 2019 total of 36,525 units,” the association reported.

Still, Howard reports that his company’s inventory is at about 25% of normal.

“We typically have 75 to 85 units available. We’re down to 19 or 20, and of those, only two are motor homes,” he said, recalling that starting in mid-May, “everything blew up. We doubled our normal volume in June and July. We’re cramming four months’ worth of sales into two months.”

Recent Ipsos research on consumer travel interest and planning found that RV travel and camping provides an appealing vacation option for American families. The research indicated that 46 million Americans plan to take an RV trip in the next 12 months.

“As states across America continue to open up, more and more consumers are looking for ways to get outdoors and recreate responsibly,” RVIA President Craig Kirby said in the RVIA report. “RVs provide a great way for consumers to enjoy vacations with their families, while still adhering to social distancing policies that are likely to remain in place in some fashion moving forward.”

The RVIA reports that the highest rate of interest in RVing is among people from 18 to 34 years old.

RV enthusiasm is creating its own problem: a finite supply of campsites. With some parks still shut down, business is “off the charts” at others that are fully open, according to Joel Tomaselli, who owns the KOA in Wilmington as well as one in New Bern. And many of those visitors are first-time RVers who rented a unit or took the plunge with a purchase.

While his KOAs saw a 75% reduction in guests during April and May, Tomaselli said once tourism opened up again in June his campgrounds saw a strong demand for spaces.

“We’re seeing many RVers from within the state, including the Triangle and Triad,” he said, adding that people just want to “go somewhere,” even if it’s just for the weekend.

“Our playgrounds and many of our organized group activities are closed and our pool is open at only half capacity, but we’re seeing the kids entertaining themselves doing things that kids have always done: riding bikes, playing hopscotch, kicking a soccer ball,” Tomaselli said. “We’re lucky to be in this business at this time.”