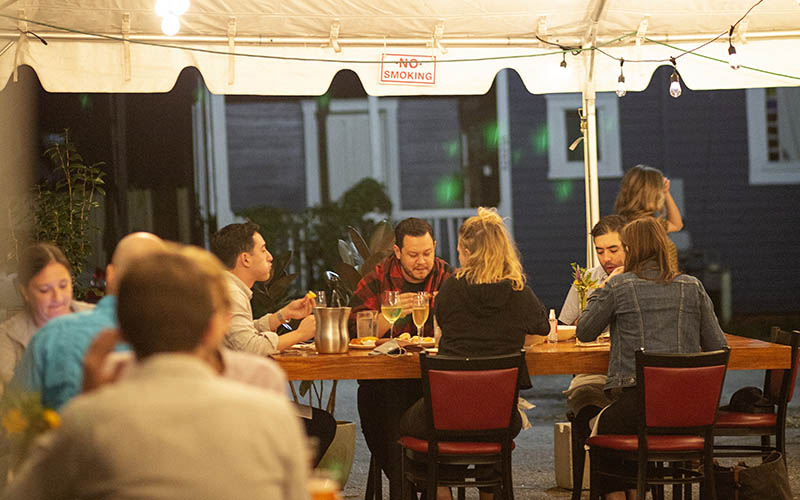 Diners are shown late last year at Rx Restaurant. The hospitality sector took the biggest hit locally during the pandemic. Loosening restrictions and COVID-19 vaccinations are expected to help those jobs rebound. (File photo)
The Wilmington area economy is doing better than expected a year after the COVID-19 pandemic took a toll on many businesses across the region, said Adam Jones, a regional economist with the University of North Carolina Wilmington.

With the recent rollout of COVID-19 vaccinations and the easing of statewide restrictions, the region could see business bounce back even more this summer, including in the leisure and hospitality industry, a sector hard hit by the pandemic.

Economists nationwide have described several shapes for this particular recession, Jones said. A “V-shape” and “check-mark” recovery were all forecasts for this economic situation.

“I think we are probably somewhere in between,” Jones said. “I think we have done better than a lot of folks, including myself, thought we might as a region and as a nation.”

The Federal Reserve in June predicted that the GDP would shrink by 6.5% for the fourth quarter, year over year.

“We turned out to only be down 2% year over year,” Jones said. “And there are two reasons for that. One, the federal government has put forward unprecedented stimulus. They have never sent out as many checks and other programs as they’ve undertaken this time around. So, that’s been helpful. And I two, I think we have a tendency to underestimate how creative business owners are … they’ve adapted. I’m amazed at how well they have done.”

New Hanover County’s unemployment figures are lowering, despite the big spike last April when figures jumped up to a 15% unemployment rate, according to figures from the N.C. Department of Commerce.

Figures have been declining since then. And January’s unemployment numbers, the most recent statistics available, showed a 5.5% unemployment rate for the county.

However, those statistics were still above pre-pandemic unemployment rates, which in January 2020 was 3.4%.

In the Wilmington Metropolitan Statistical Area, jobs in the leisure and hospitality sector continue to suffer the most, down 14.5% year over year in January.

Jones said he expects an improvement in that sector to come in July, as the summer could prove strong for the industry’s comeback with more people making their way to the coast during the tourist season.

“I think there is a lot of pent-up demand, and I think that people are sitting on savings and they’re just itching to go ... And the vaccines have just started,” Jones said. “I expect people to come back. I expect that [people] will vacation here. I think that indoor dining may be a little slower to recover just because we’re waiting on people to get comfortable with it, but I don’t think that’ll take too long either.”

It could be harder, however, to bring back the area’s unemployment to pre-pandemic rates, he said.

“Even with a pretty strong bounce back, if unemployment gets down to 5%, it’s going to be hard to drive that last percent. It always is,” Jones said. “Most of the real gains have already taken place, for instance, in retail, and now we are starting to see the leisure and hospitality lined back up.”

Taxable sales during March 2020-January 2021 for the three-county area were almost 2% higher than the same time period before the pandemic, according to Jones.

“Further, many state and local budgets will be in a strong position because any ‘non-essential’ expenditures were cut,” Jones said. “For example, at the university, nobody is traveling and while travel isn’t a large part of the university budget, it’s an example of cuts that were made that should put the state and local governments in a strong position to help drive growth going forward.”

Overall, Jones said he believes the region is “on a strong path towards recovery.”

“I think really what is going to drive all of this isn’t an economic story. This remains a public health story,” Jones said. “And the quicker we can get the vaccines out there and get the public health crisis behind us, the economy will recover right on its heels.”