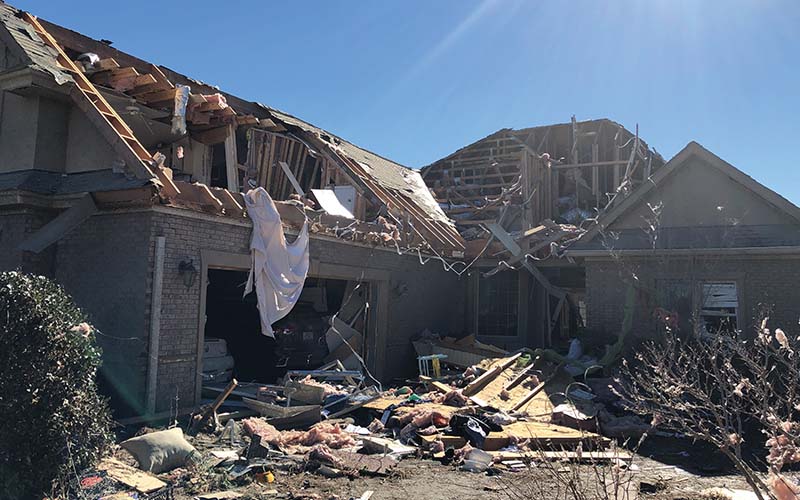 A tornado destroyed homes in Brunswick County’s Ocean Ridge Plantation neighborhood. (Photo c/o National Weather Service)
Brunswick County has learned that it takes a village to raise (up) a village.

After a tornado spent nearly 30 minutes churning along a 22-mile swath of southeastern Brunswick County on Feb. 15, the county has leveraged help from an entire “village” of state agencies, county departments, affected residents and volunteers.

The costs of cleanup and rebuilding in the heavily hit development of Ocean Ridge Plantation will be significant, but the county cannot expect any federal disaster funds, according to N.C. Emergency Management spokesman Keith Acree.

“The uninsured damages in Brunswick County did not meet the level required for a disaster declaration. Most of the damaged and destroyed homes were adequately insured,” he said.

But insurance reimbursements alone do not begin to address the twister’s toll on hearts, homes and human life – three people died, and 10 others were injured. Collaborative efforts are needed to put the pieces back together, and they have been happening since right after the tornado.

“NCDOT agreed to do vegetative debris pickup, which is fortunate,” said Brunswick County Manager Randell Woodruff. “It’s confined to the Ocean Ridge development and surrounding roads. The county staff will pick up construction and demolition debris.”

That effort began March 8 and was projected to take at least two weeks. Woodruff said it is too early to tell just how much the debris collection will cost, although the state’s Department of Transportation has an early estimate for its share of the work.

“We did an initial estimate on the site, but that number could fluctuate,” NCDOT spokeswoman Lauren Haviland said. “The initial estimate was for about 1,200 tons – or 6,000 cubic yards – of debris. Based on that estimate, the cost would run about $87,000. It’s important to note that not only does this cover debris removal inside Ocean Ridge but also along N.C. 904 and other state-maintained roads nearby.”

“I suspect it will take a couple of weeks inside the neighborhood, and I believe the cost could exceed the original estimate,” she added.

NCDOT had to get a waiver from the state to pick up brush and trees in Ocean Ridge Plantation, which is a private development of 825 single- family homes, but Haviland said the need was obvious.

It appears that Brunswick County Solid Waste will have to pick up construction and demolition debris, Woodruff said. County spokeswoman Meagan Kascsak said it’s too early to calculate the expense.

“While the initial assessment estimated there was 200 cubic yards of construction and demolition debris on identified roads’ rights-of-way, the official total cubic yards and the cost to collect will not be determinable until after county crews have completed the full pass along each identified road,” Kascsak said.

First on the ground after the tornado struck was Brunswick County’s Emergency Services Department, led by its director, Ed Conrow.

“We did the initial search and rescue, then we transitioned to recovery mode once the initial phase was complete,” Conrow said. “We serve as the liaison between the [affected] community and our partners; we coordinate and deploy them, assisting them with ways to secure the debris. We’ve also been doing outreach about unmet needs and seeing if we can resolve them.”

Conrow said his component of the “village” consisted of fire departments and the Brunswick County Sheriff’s Office. He pulled in area utility companies that had to address supply and safety concerns in the affected areas. His department coordinated with its counterpart agency at the state level and, along with other county officials, met with N.C. Gov. Roy Cooper and U.S. Rep. David Rouzer (R-7th District) when they came to survey the situation. And they organized many volunteers.

“The first couple of days, we were trying to get everyone orchestrated, assign tasks and make sure we weren’t wasting resources,” Conrow said.

For nearly two weeks after the tornado chewed up vegetation and structures on a path through Ocean Ridge, an ad-hoc command station coordinated efforts of all the responders. In addition to county emergency personnel, the station housed representatives of the N.C. Department of Insurance and Brunswick County Permitting as well as area utilities companies.

“The command center organized volunteers, our own included, to ensure we were addressing the most risky aspects of the damage,” Ciliberto said. “We worked with Randy Thompson, our [county] commissioner, to request him and the governor to ask NCDOT to pick up debris,” she said. “We also worked to make sure all the volunteers could get as much debris as possible to the roadside so it could be picked up and residents can rebuild. The HOA board, committee chairs and property owners worked tirelessly for 13 days.”

A church and a few small businesses near Ocean Ridge saw their property damaged, but the major tornado impact was within the development, where Ciliberto says about 70 homes sustained total or major damage.

Ciliberto says the HOA still maintains a virtual command center to take care of humanitarian needs. The development already has a 501 (c)(3) organization that makes grants to support social service initiatives in Brunswick County. These days, that organization is handling donations for tornado relief in their own community and making sure the donations reach people who need help.

“We have committees that are now going off to make sure we can communicate the damage as we see it and create options for plans to rebuild, restore, replant,” Ciliberto said. “It takes money, so we are working with our insurance providers to ensure we agree with their assessments. Once that’s understood, we can make plans to do appropriate restoration.”

Ciliberto said the tornado brought more than destruction: It brought kindness from strangers. In addition to the many donations that the Ocean Ridge HOA’s nonprofit has received, there has been a harvest of willing hands ready to raise up that village.

“We have had well over 1,000 people volunteer to help,” she said. “The volunteer organizations and the spirit of tirelessly giving of yourselves to help others was fantastic. It was humbling as to how beautiful it was. We want to thank everyone who helped us.”

And although the tornado likely did millions of dollars’ worth of damage, the county manager is grateful.

“It could have been far worse than it was,” Woodruff said. “If it had turned a little bit, many more houses would have been in its path.”