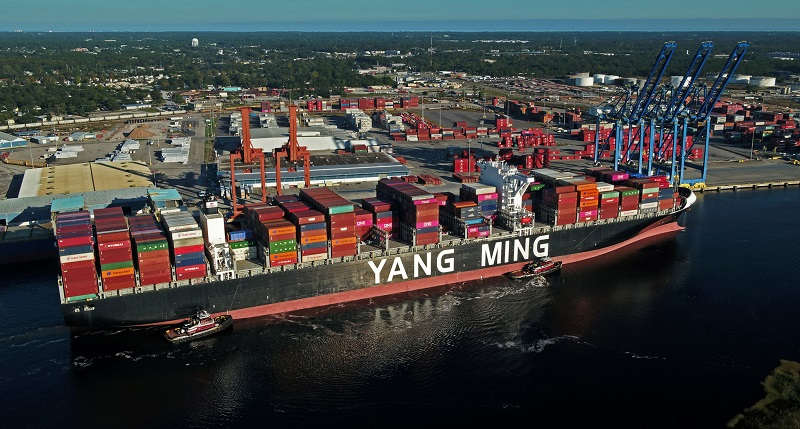 The Yang Ming Warranty, part of an Asia and South American trade route shipping fleet, is the largest vessel to reach the Port of Wilmington. (Photo courtesy of N.C. Ports)
The N.C. State Ports Authority welcomed its first-ever 14,000 twenty-foot-equivalent unit cargo vessel, making history at the Port of Wilmington.

The cargo vessel, called the Yang Ming Warranty, cruised into the Port of Wilmington on Monday. The ship has a carrying capacity of 14,220 TEUs (twenty-foot-equivalent units) and is the largest such vessel making its way to U.S. ports on the East Coast.

"The arrival of the Yang Ming Warranty further solidifies our position as a big ship-ready port. We are capable of working the largest container vessels calling on the East Coast,” said Brian Clark, COO of N.C. Ports, in the release. “As our capabilities continue to expand so will our abilities to better serve existing and future customers.”

The Yang Ming Warranty is operated by Yang Ming Marine Transport Corp. in partnership with THE Alliance, which is a large commercial shipping group that links Asia and South America to the Wilmington port, along with others on the East Coast.

THE Alliance shipping group is made up of three additional ocean carriers: Hapag-Lloyd, HMM and Ocean Network Express (ONE), officials said in the release.

Officials said the arrival of the Yang Ming Warranty marks a major milestone, driven by the work and investments N.C. Ports has made in its infrastructure in the past few years.

Major projects within the ports' more than $221 million capital improvement plan have been specifically geared toward making it possible for these ultra-large, 14,000-TEU containerships to reach the Port of Wilmington.

Those capital projects include the second-phase widening of the Port of Wilmington's turning basin; raising powerlines that cross the Cape Fear River; opening up improved docking space at the port; and adding to those docks, three neo-Panamax cranes.

Some of the improvements also give the Port of Wilmington the capability to handle and work on at its docks two 14,000 TEU vessels at the same time.

“This latest achievement would not have been possible without the support of our many partners at the local, state and federal levels as well as funding from the North Carolina General Assembly,” Clark said in the release. “It is also proof our infrastructure improvements are paying off and our customers are taking notice.”

In the future, N.C. Ports aims for even larger ships to reach the port and is seeking to meet federal approvals for its Wilmington Harbor Navigation Improvement Project. Recently, two local state senators shared their opinions on the project.

The project seeks to deepen the navigational channel leading to the Port of Wilmington from a depth of 42 feet to 47 feet.

Several ports along the East Coast, including neighboring competitor ports, are planning massive harbor deepening projects to help improve the depth for the future of the container shipping industry, which is bringing on larger and larger vessels that need deeper harbors for travel.

Previous estimates on the Port of Wilmington's navigational improvement project have put the price tag at $750 million. Estimates this spring have reached $834 million.

The proposal has been entered into the 116th Congress 2D Session in H.R. 7575, "an act to provide for improvements to the rivers and harbors of the United States, to provide for the conservation and development of water and related resources, and for other purposes."

"The cost share associated with the project would be 75% federal and 25% non-federal," said Bethany Welch, spokeswoman for N.C. Ports. "The Wilmington Harbor Navigation Improvement Project cannot move forward until there is formal approval by both the U.S. House and Senate."