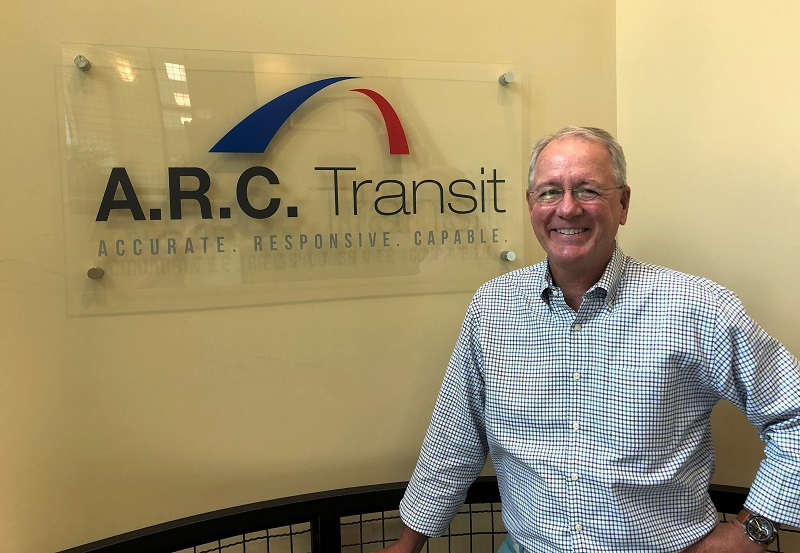 Gary Winstead, CEO of A.R.C. Transit, stands at the company's headquarters located at 2715 Ashton Drive in Wilmington. (Photo courtesy of A.R.C. Transit)
Wilmington-based A.R.C. Transit LLC has been acquired by a national trucking services provider, a move that will help grow the local company.

Winstead will remain the CEO of the firm for the "foreseeable future," he said.

"They're good people. They share our culture. I believe we share the same vision. I think this will be a good cultural fit and a good corporate fit," Winstead said of the acquiring firm. "I've always wanted to know and wanted to see what I could do with this company, and being able to do it now from this point forward without a lot of the financial risk, which now belongs to the acquirer, its sort of a best-of-both-worlds thing for me."

Winstead was a partner in the company with ​the firm's former COO Scott Anderson, who retired from the firm's day-to-day operations more than three years ago. The company was originally founded in 2006, and has transitioned names over the years.

A.R.C. Transit will remain based in Wilmington, Winstead said. The company has just over 50 employees, he said.

"I've got a great team here in Wilmington and this team is who got us to where we are now and they are remaining intact, so I am very excited about that," he said. "From A.R.C. Transit's perspective, it's business as usual. There has been very little in the way of change."

In the first quarter of 2019, the firm had connected with Jacobs Capital, an advisory firm, to take A.R.C. Transit to the marketplace and to see how the market would respond, he said.

One of the primary drivers of the firm's desire to go to market for the acquisition was due to rising insurance costs of keeping trucks on the road, he said.

A.R.C. Transit is a third-party logistics company that operates in the drayage space, or container trucking space. It has 12 terminal operations located primarily in the Southeast, but does business all over the country. The firm serves containers at the Port of Wilmington, and others, including ports in Norfolk, Virginia, Charleston, South Carolina, and Savannah, Georgia.

As a result of the acquisition, A.R.C. Transit is a part of Evan's insurance program, a "massive change" for the firm.

"Instead of us going out to try to find insurance for a 200-driver fleet, we're now under the flag of a company that has 6,000 drivers across the country. It's a much greater buying power," he said.

Another major benefit the acquisition provides is a boost to capacity.

"As a third-party logistics company, we go out and find a solution for the movement of ocean containers in and out of ports primarily in the Southeast, but we do a lot of business all over the country. And as opposed to being regionalized in our trucking operation that's supported that third-party logistics operation, we now have the back up of Evans Delivery, who nationwide has 400 permanent locations and 6,000 drivers across the country. So we see it as a tremendous amount of capacity that we did not have before," Winstead said.

Evans Delivery is a member of The Evans Network of Companies, which is a portfolio company of Calera Capital.

​"Evans Delivery, they are a very rapidly growing company, they did not buy us for us to stand still," Winstead said, adding that he expects A.R.C. Transit will continue on the path of steady growth and add employees.

The move will also bring more benefits and options for its employees.

"Obviously, the employees are well taken care of," he said. "They now are a part of a larger organization. It gives our employees more in terms of benefits and long-term opportunities for upward mobility."