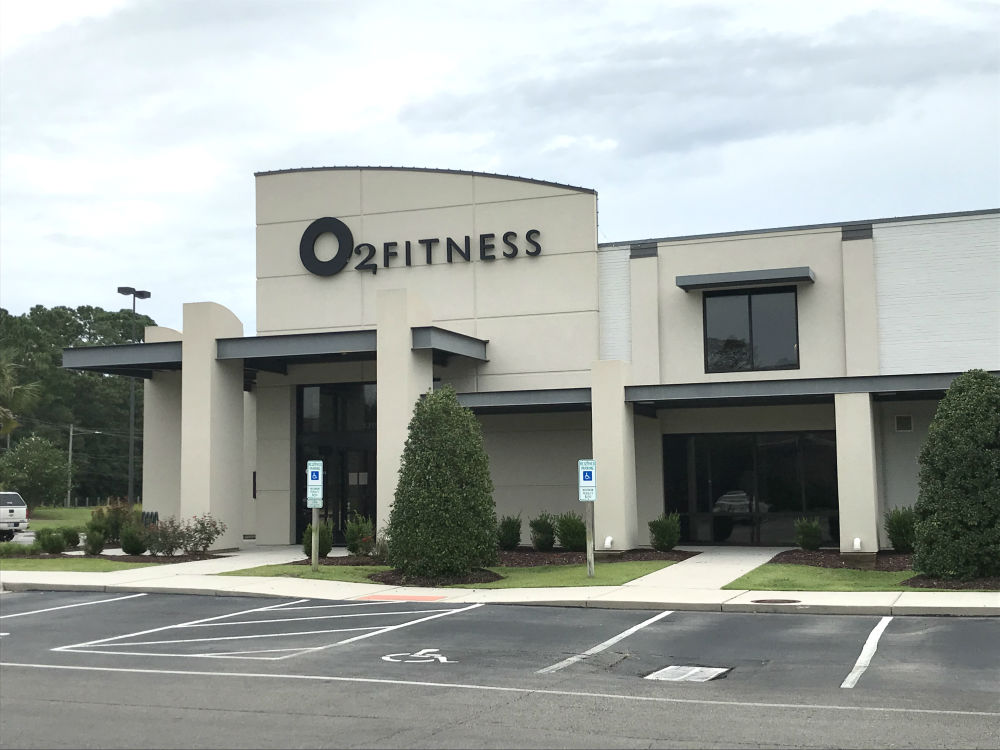 The O2 Fitness at Hanover Center. The gym has been working to reopen using safety protocols. (Photo by Cece Nunn)
The efforts of O2 Fitness to establish health and safety standards that would allow the gym chain to open fully have stalled, at least temporarily.

Late Friday, after company officials did not reach an agreement with N.C. Dept. of Health and Human Services, O2 Fitness sent an email to members of its North Carolina facilities informing them of the postponed opening.

“On Thursday we sent you an email notifying you that we would be reopening your O2 Fitness club on Saturday, August 22nd,” the message stated. “This afternoon, we were contacted by the North Carolina Department of Health and Human Services (DHHS) and they asked that we pause our current reopening plan.

"We have worked very closely with DHHS for the last three months in an attempt to collectively craft a plan to responsibly reopen fitness centers across North Carolina, so their request today was not something we anticipated.”

The message pointed out that other indoor fitness centers in the areas where O2 Fitness operates are open and operating.

Those locations have taken advantage of an exception to Phase 2 restrictions on gyms offered in early June by N.C. Attorney General Josh Stein.  “[G]yms, exercise facilities, and fitness facilities may open their indoor areas to serve any people prescribed or directed to use those facilities by a medical professional or health care professional,” Stein wrote in a letter June 5. “The number of people using this exception may not exceed—in any room or other single confined space—the indoor Mass Gathering limit.”

That limit is 10 people per room or other enclosed space.

But since O2 seeks to open to all members, and not just members whose medical providers have prescribed exercise for medical conditions, it has met with resistance from DHHS.

“There is a lot of misinformation out there,” Dick Jones, president and CEO of the YMCA of Southeastern North Carolina, said Tuesday.

He pointed to a second letter from the Attorney General's office, also issued June 5, that attempted to outline this medical exemption and then clarify it. "YMCAs have been following this for quite some time: watching this and closely following the governor's guidelines and DHHS guidelines for a way to open safely within the guidelines that have been articulated."

Because the Attorney General's office spelled out what measures gyms must take to create access for individuals with exercise prescriptions, officials at the YMCA of Southeastern North Carolina felt they would be safe to meet the standards and allow that access. Giving access to those individuals is different from opening to all members, Jones said.

Jones said even this limited use of its facilities is a welcome revenue stream. The two facilities continue to offer outdoor classes as well.

"We are pleased to be able to do what we can right now," Jones said. "Some folks have come to us in the past week."

Both local TF Fitness + Nutrition locations -- on Shipyard Boulevard and Kerr Avenue --  opened in June and have been operating at 50% capacity with no problems, according to owner Skip Lennon.

"We've been doing a tremendous amount" to sanitize the gyms and distance people, "meeting and exceeding guidelines," Lennon said Tuesday. Among those measures, the company installed air purifiers and is having an outside company fog and disinfect the facilities.

"We moved our equipment to allow social distancing and our staff does daily sanitizing," he added.

Lennon said TF Fitness + Nutrition has had no communications from DHHS or the New Hanover County Health Department, and wondered whether perhaps his company's relatively small size and local ownership and oversight has enabled it to open and remain open.

Meanwhile, O2 Fitness officials say they will continue to work with NCDHHS to establish protocols that will allow it and other gym chains to reopen fully.

"Almost every indoor fitness center in your area is open and operating," the message to members in North Carolina stated. "The cleaning and social distancing procedures that we outlined in our previous email are the most stringent and comprehensive of any fitness club in the state. They are also the same procedures we’ve used for the past three months at our clubs in South Carolina where we have seen more than 77,000 individual check-ins without a single case of COVID-19 spread in our clubs.

"We believe it is manifestly unfair that we are being instructed to remain closed to our members when other fitness operators—many with inferior or non-existent safety protocols—remain open."