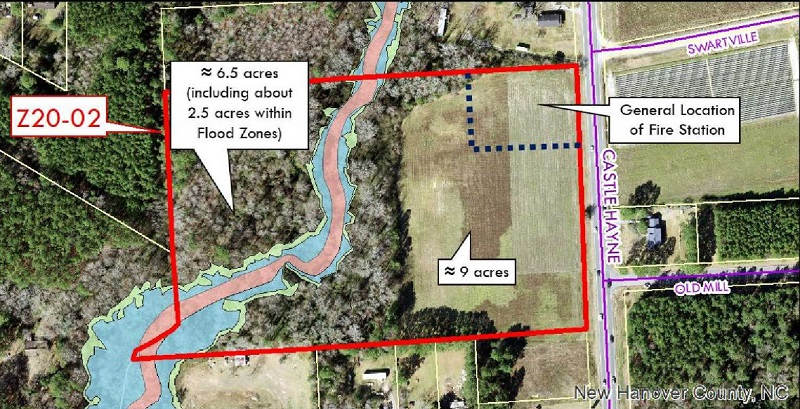 A public hearing will take place on the potential rezoning of several acres off Castle Hayne Road that would allow for a workforce housing development. (Site map courtesy of New Hanover County)
A public hearing is slated to take place on a rezoning request that would allow for a potential Cape Fear Habitat for Humanity development in the Wrightsboro area.

The New Hanover County-owned site is at 3101 Castle Hayne Road and includes nearly 16 acres, according to county documents.

“The majority of this property is proposed to be conveyed to Habitat for Humanity for a workforce housing subdivision. The remainder of the site (approximately 1.5 acres) will be retained for development of a future fire station,” county documents state.

Commissioners, however, have yet to approve donating the land for any potential project, Steve Spain, executive director of Cape Fear Habitat for Humanity, said Friday.

Should commissioners approve the rezoning request and approve donating the land to Cape Fear Habitat for Humanity in the future, Spain said the site could make for one of the larger developments by the nonprofit in the Wilmington area.

With the size of the land being considered for rezoning, there is the potential to have at least 30 units on the property, “which would be a big development for us,” he said. There is quite a bit of land on the site, however, that are wetlands.

Spain sees larger developments as a way to make a bigger impact on the community.

“We do see our future more and more in these larger developments because there is so much scarcity of infill lots in the city of Wilmington, or single lots available in the county,” Spain said. “We do see development of the land and bringing the infrastructure as habitat’s future in the county.”

One such large development is now taking shape off of Gordon Road.

Within the past several weeks, Cape Fear Habitat for Humanity has started development of three single-family homes in the new Blendin Meadows subdivision at 1933 Daniel Boone Trail. The site is planned for a total of 27 single-family units.

The project got a late start due to bringing in a road, as well as water and sewer infrastructure, he said. A little over $1 million was spent on that infrastructure.

The city of Wilmington and New Hanover County contributed funds to extended water and sewer service to homes at the subdivision site.

“We will continue to build in the city when we can get the lots, but we are trying to greatly increase our capacity in order to meet the need for affordable housing," Spain said. "We’ve gone to 10 to 12 houses a year. And this year, we will build 24, and would like to stay at 20 a year.”

Even doing 20 homes a year, it's still barely touching the need for affordable housing, especially after Hurricane Florence, which damaged or destroyed many units, Spain said.

“We have to address that gap,” he said, “as well as address the need that existed before.”