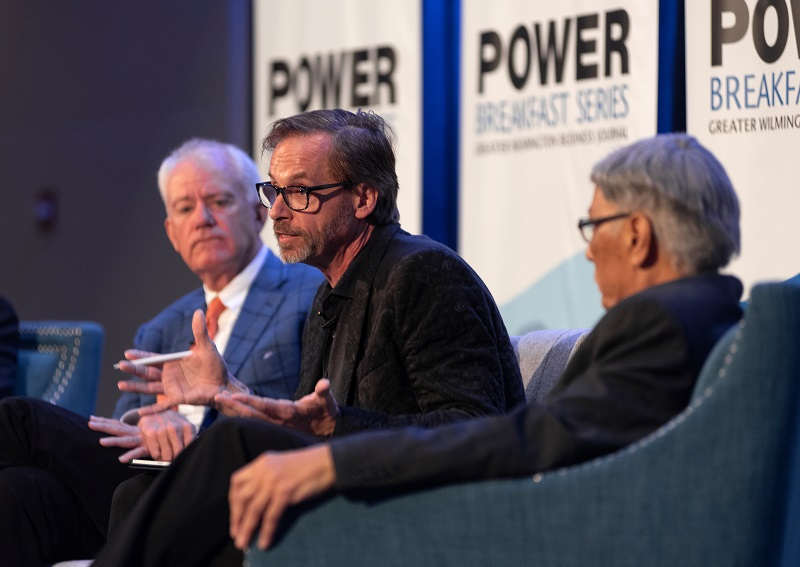 Chip Mahan (from left), Brett Martin and Yousry Sayed talk about the area's efforts to recruit employers Thursday during a Power Breakfast at the Wilmington Convention Center. (Photo by Michael Cline Spencer)
The region needs a more coordinated effort to draw talent and industry to the Wilmington area, local business leaders say.

The area's business community over the years has experienced what Brett Martin, CEO of CastleBranch, called "accidental entrepreneurship." But it's going to take more of a network to facilitate attracting business and talent to the region in the future, panelists said at an event Thursday.

"And that's what I think some of us are talking about today is, 'How do you build an overall ecosystem that will support entrepreneurs coming to us?' That takes coordination," said Martin, who founded a national background screening and compliance management company in 1997.

Martin was joined by Chip Mahan, Live Oak Bancshares Inc. chairman and CEO, and Yousry Sayed, Quality Chemical Laboratories president and CEO, during the Power Breakfast on Thursday hosted by the Greater Wilmington Business Journal at the Wilmington Convention Center.

Each of the Wilmington-headquartered companies has grown into sizable operations over the years.

Noting the region's many different economic development organizations, he said, “I just hope that these folks come together and have a consolidated mission and play offense.”

On the technology side, more workers are needed, and the region's educational institutions could help fill that demand, Martin said.

"Technology really is the future, and technologists are the ones who drive the future. And we can create those here in Wilmington. We have a university," Martin said, adding that the area could do a better job training that workforce.

Between nCino, a fintech company Mahan co-founded, and Live Oak Bank, the companies have hired about 300 people who have gone through the University of North Carolina Wilmington, Mahan said.

For Martin's company, the state's university system has supplied about 57% of its employees, he said.

"Although I will say there is not enough technology talent in this town," Martin said, adding that it's the smaller technology companies that are having trouble getting the workers they need.

Attracting talent also means having the right ingredients, he said. Those include capital, knowledge and a network.

The biggest attraction right now, however, is the beach, Martin said, adding "we can't build businesses from sand."

Quality Chemical Laboratories could double in size this year if the company could find the right workforce, Sayed said.

"I think the biggest [issue], especially now with our [unemployment rate] as low as it is, which is good: It's finding the talent," he said, adding that it's especially hard to find skilled workers in highly technical fields.

He noted also that success relies on the ability to compete for that talent.

"We have to provide competitive salaries, benefits that are good, career opportunities, such as training ... We have to invest in training our employees to make sure they move into the next phase," Sayed said.

The firm will need more employees down the road, to grow Pyramid Pharmaceutical Co. LLC, a sister company, in Wilmington.

Quality Chemical Laboratories, a pharmaceutical firm founded by Sayed in 1998, has about 150 clients from all over the world, including the 10 largest companies in the world, he said. That's because of what has been built within the company and by Wilmington's pharmaceutical industry over the years.

But what worked for the region in the past might not work for its future, he said.

“We have to think about what fits our community and not just New Hanover County,” Sayed said.

He said Wilmington's surrounding counties also have the space and resources that could help reel in growth.

“We have got to decide which direction we take because we can’t all be in offices and doing a lot of things that are not really producing things that people need. I would love to see some companies like John Deere or Caterpillar come to Pender County and build a plant if they could do it right and under the right conditions,” Sayed said. “I think there is going to come a time where in this county, it's not going to be that easy to bring certain types of industries. That’s something we are going to have to face.

"So I think it's a complicated issue," he said. "But I think at some point we will have to have a discussion about, 'What is it that -- with the politics and all of it -- what is that we really want to bring in here?'"