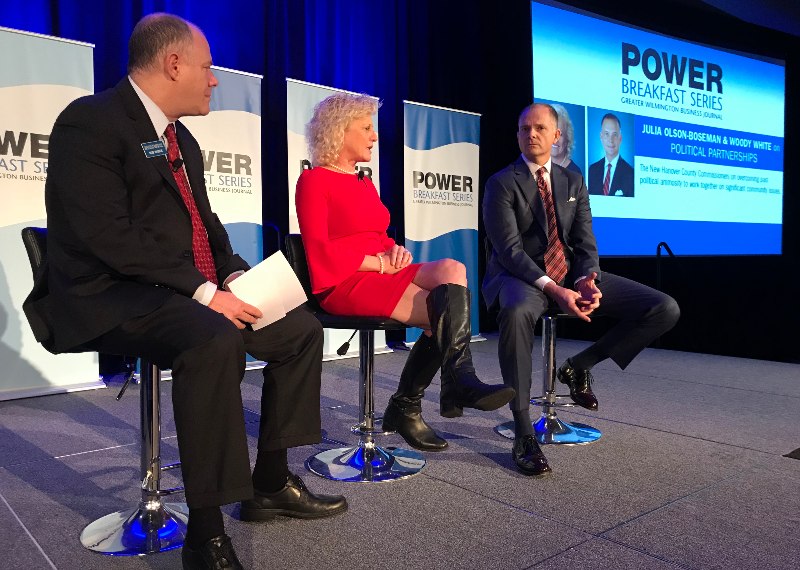 Asked what the county might do with the possible $1 billion that could be netted from a sale if that’s the way current discussions go, New Hanover County Commissioners Chairwoman Julia Boseman-Olson said, “I don’t know that it’s leaning towards the sale from talking to, from listening to the Partnership Advisory Group.”

County and NHRMC officials formed the 21-member PAG after New Hanover County Commissioners approved a resolution in a 3-2 vote in September to receive bids from possible buyers or management partners for the hospital. Commissioners Woody White, Pat Kusek and Olson-Boseman voted in favor while commissioners Rob Zapple and Jonathan Barfield voted against it.

Olson-Boseman also said Thursday she’s heard that 12 systems have made contact about wanting to put in proposals. The PAG is crafting a request for proposals to gauge interest from outside health systems in acquiring, managing, partnering or some other model for running NHRMC. The PAG group also will research options for keeping NHRMC county-owned.

Olson-Boseman, in a joint conversation with White, shared those hospital thoughts and others Thursday during a Power Breakfast hosted by the Greater Wilmington Business Journal at the Wilmington Convention Center.

In his response to the $1 billion question, White said the money would be transformational for New Hanover County.

"Now does that mean we're going to sell? Absolutely not. Because what I predict is sort of what Julia's predicting. I predict that's not going to happen because I predict that there's going to be some other governing model out there that's presented," White said.

The event was titled, “Wilmington’s Most Intriguing People of 2019,” and the portion that included White, a Republican, and Olson-Boseman, a Democrat, looked at their unlikely friendship.

Olson-Boseman said much can be accomplished by setting old animosities aside and working together.

“People deserve better than us fighting,” she said, of the relationship she has formed with White and the only other Republican commissioner on the five-member board, Kusek.

While Kusek and Olson-Boseman did not have a history, Olson-Boseman and White did, going back 15 years ago to an extremely heated state Senate race.

Some people at Thursday’s breakfast, White said, might not know "how ugly and bitter it was, the campaign, and how personal it was against Julia and against me, and I think we bore equal responsibility for that.”

When Olson-Boseman, after she was elected last year, made an appointment to see White, he said, “I expected more of the same, and I expected repeated patterns and conflict and so on. But ... there were a lot of things I didn’t know about what had happened in our lives spanning those 15 years.”

White, who along with Olson-Boseman is also a practicing attorney, said they hadn’t spoken in that period or before, “never really had a conversation other than calling each other names or being ugly to each other on TV commercials.”

It was time to take a different route, White said.

Olson-Boseman said, “I wish that this kind of relationship would happen on the state and national level instead of us talking about what is so bad about each other.”

Another speaker, Patrick Brien, is working on a new concept for the region, Cape Fear Collective, a social impact organization.

Backed by Live Oak Bank initially, the organization aims to bring organizations, businesses and people together to affect social change, Brien said. Eventually, its funding will likely come from public and private sources.

“There's a thousand organizations in this community, literally a thousand ... who are doing great work,” he said. “How do you get those folks rowing in their boats at the same speed, looking out left and right, seeing who's next to them, to the same outcome?”

Girls Leadership Academy of Wilmington, a single-gender charter school, is another example of the community coming together that was discussed at Thursday’s event.

Some of the students who go to the school attended the breakfast, and Girard called them up onto the stage. They shared the pledge that students worked together to write, which includes keeping a positive attitude and living in confidence. Another part they recited: “We use our minds and we never leave a sister behind."

Perry, who said he was interested in bringing a soccer franchise back to the Port City and is working with local officials on upgrades to Buck Hardee Field, also talked about the advantages of building a new youth sports facility in Wilmington to capture more sports tourism dollars.

"From our standpoint, if we can get things done in Buck Hardee field and ensure our longterm future, we want to keep investing in sports, we want to bring a soccer franchise back," Perry said. "These facilities are tools in our toolkit of getting into sports tourism."

Read more about Perry's ideas in an upcoming story on  wilmingtonbiz.com.