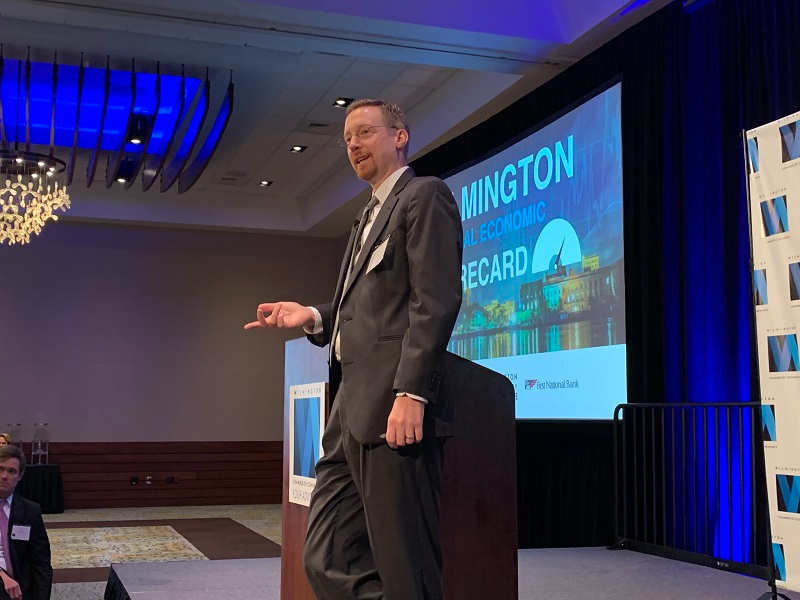 That might be why some of the area’s businesses have trouble filling positions in those fields, said Jones, of the University of North Carolina Wilmington’s Swain Center. He spoke Tuesday before a crowd of more than 200 people at the annual Wilmington Regional Economic Scorecard event at the Wilmington Convention Center.

Jones highlighted the tri-county region’s jobs and population growth, and opportunities, at this year's event. His presentation marked a change from the usual annual discussion of regional rankings among outside peer cities since 2015, when the event was created by the Wilmington Chamber of Commerce's flagship initiative Cape Fear Future.

“We have a pretty good feel for where we stand," Jones said. "Our goal this morning is to go from outward to inward for a morning, talk about where we are, how we got here, and then think about what are we going to do going forward.”

Technical and STEM fields have shown to be promising future opportunities in North Carolina, based on future job openings, salary and industry growth, Jones said.

"These are the folks that are going to fill those technical jobs that we're trying to build to then support other jobs in the community. These are probably the folks that we really would like to attract here," Jones said.

But the region, when compared to the nation's average, has a significant gap in the number of people between the ages of 25 to 39 with science- and engineering-related degrees, Jones said, adding, "That's 1,200 folks to fill these technical positions that are not here."

“We’ve got a lot of well-educated folks living in Wilmington and the surrounding parts of New Hanover County. Brunswick and Pender though are different. They’re just now starting to see some of that growth,” Jones said of the statistics.

"So very different workforces and education levels across the counties," he said.

What are the educated people doing for a living? New Hanover County employment growth between 2010 to 2018 showed leisure and hospitality have had a large share of the growth at 30% and business and professional services have grown by 24%, he said.

Fields above the national average in that same timeframe include construction and information. Manufacturing has been declining, he said.

“That’s reflecting the size of the region increasing," Jones said of the industry growth in professional services. "And Wilmington and New Hanover County becoming the urban core. We are starting to look more and more like what you might think of as a traditional metropolitan area where you've got a downtown with a professional service attached to it. And then as you drive out, and drive out until you can afford where you want to live, your demographics change as you move farther out. We're starting to see that pattern developed here."

New Hanover County's demographics show there are not as many young children, Jones said, adding “that might suggest that some of these folks are being priced out of this market or having a difficult time finding employment to support a family.”

Pender County, he said, has more families moving in, while statistics show Brunswick County has more people come in that are either close to or at retirement.

“It’s very different than what some of us might have thought … that means that our challenges are going to be different then what we thought they might have been,” Jones said.