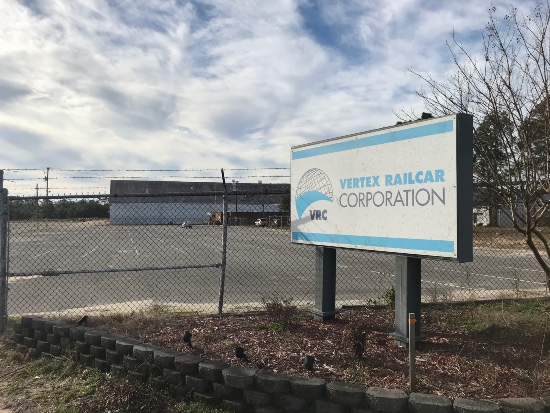 Vertex Railcar Corp. faces an involuntary Chapter 7 bankruptcy petition claiming the company owes more than $45 million, mainly to one of its owners, according to court documents.

The rail car manufacturer started hiring in Wilmington for its 202 Raleigh St. plant about five years ago, with CEO Don Croteau claiming the company would eventually hire more than 1,300 people. The jobs never materialized to that extent, legal issues plagued the company, and last year, officials working with Vertex Railcar announced that it would be closing.

CRRC Yangtze Co. Lt., which owns part of Vertex Railcar Corp., claims nearly all of the  $45.4 million in the petition, filed in U.S. Bankruptcy Court in Delaware.

The other petitioners in the September filing are Wuhan Kemai Machinery Mfg. Co. Ltd. ($92,561) and Wuhan Flying Free Logistics Co. Lt. ($373,273), according to court documents.

In the bankruptcy filing, an order for relief, meaning the petition could move forward, was granted Oct. 15, according to court documents. The case’s status is currently listed as, “Awaiting involuntary answer.”

In general, Chapter 7 bankruptcy is a liquidation device, said Elizabeth Gibson, professor emeritas of the University of North Carolina School of Law, who isn’t involved in the Vertex case. The property is gathered up and sold off, and the proceeds distributed in an order specified by the bankruptcy status.

Chapter 7 provides an orderly process for paying off creditors.

“That gives you a trustee who would be in charge of the sale of the property, and you got sort of a neutral figure in there who will be controlling things,” Gibson said.

A call to the petitioners’ attorney, Jason Gibson (not related to Elizabeth Gibson) of The Rosner Law Group LLC in Wilmington, Delaware, resulted in a representative stating that it’s the firm’s policy not to provide comments to reporters.

Efforts to contact CRRC through an email address listed on the company’s website or to find other contact information for CRRC were not successful. Croteau also did not return a message seeking more information.

Vertex Rail’s track to closure was a bumpy one. Its problems started not long after officials at the end of 2014 announced the new company would hire more than 1,300 people in Wilmington. The highest number of employees the company ever reported was a little over 200.

As time went by, legal problems and questions about the company lingered until its closure last year.