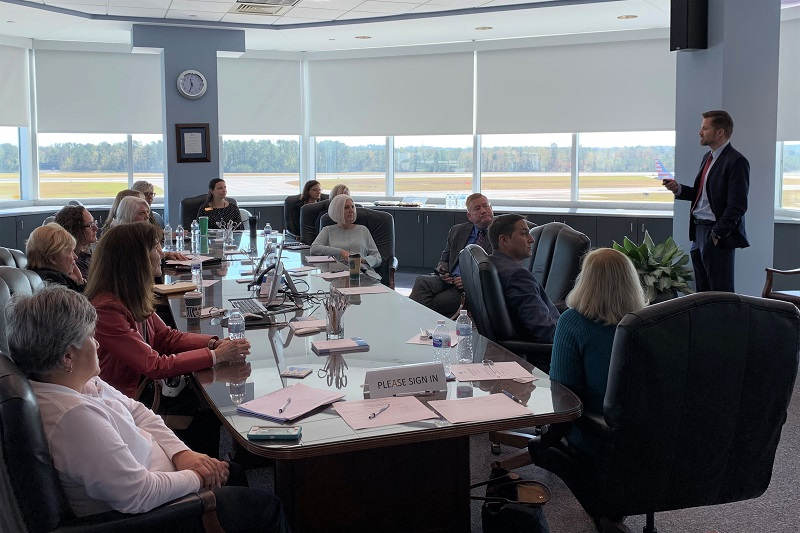 Members of the area's tourism and business industry met at the Wilmington International Airport on Thursday to hear a presentation from the airport's new air service development firm. (Photo by Christina Haley O'Neal)
Coming off the success of bringing in United Airlines and new flights aimed at business travel at the Wilmington International Airport, officials are exploring ways to bring more visitors to the area and possibly a low-fare carrier.

To do that, airport officials hosted two meetings Thursday with area leaders in the tourism industry and the business community to hear first-hand about those efforts from ILM’s new air service development firm, Ailevon Pacific Aviation Consulting, which was hired by ILM this summer.

​ILM has been focused for a long time on the business market and business travelers, said Julie Wilsey, ILM’s airport director, to the group of about 15 people in the tourism stakeholder meeting. But on top of its efforts for business travel, the airport is now thinking about ways to serve travelers who want to visit Wilmington on vacation.

“We think that we are ready, both as a tourism market ... and also as an airport. We believe that we can support both a strong business traveler and also some inbound tourism,” Wilsey said.

Finding the right market for tourism or bringing in a low-cost carrier will not happen overnight, Wilsey said, adding that it took four years of conversations to get United Airlines to come to ILM in 2018.

Oliver Lamb, managing director at Ailevon Pacific, who is based out of Atlanta, spoke to the tourism stakeholder group Thursday, updating members about ILM's market, its challenges and opportunities that could lie ahead.

The firm has found that ILM's underserved markets for travel overall are in Boston, Newark, New Jersey, and South Florida, Lamb said, adding that the firm is going after those markets.

To that end, the firm is also looking at finding ways to meet challenges that come with filling flights.

One challenge is the cost.

On average, domestic airfares are 23% higher than RDU and more than double MYR's fares, Lamb said.

Another challenge is Wilmington's highly seasonal market, he said.

The firm and ILM are requesting, from tourism leaders, hotels and attractions in the tri-county area, data to find out where the area's visitors are coming from to help with data sets, as well as the possibly finding solutions to bringing in visitors even during the off-season.

Lamb said that while the firm can pick up data from the airlines through ILM, it cannot account for visitors who drive to Wilmington or travel in from outside airports. The data is needed to find a hotspot for area travelers to better help with efforts going forward, he said.

ILM's market pull, however, extends farther than ever, drawing from a population of about 1.2 million people within a catch region that extends from around the South Carolina border just past New Bern, Lamb said. That data, which the firm has found in their research, could help in future conversations with carriers, who rely mostly on Census data, he said.

“That’s much bigger than what’s previously been told,” Lamb said. “So we’re telling a new story. A bigger story. And a story that we need to communicate with the airlines because the airlines have their own information and what they have been told previously has been a much smaller number.”

Wilmington has become one of the fastest-growing markets among its peers, he said, coming in third to Asheville and Pensacola, Florida, respectively.

"We are trying to figure out where the inbound [visitor] is coming from so that we can [figure out] how does that fit into this strategy? How does it support Boston, Newark, South Florida? Or is there something else we can add to that or another carrier that has another destination that might fit ... again, we are trying to look at where those networks are," Wilsey said.