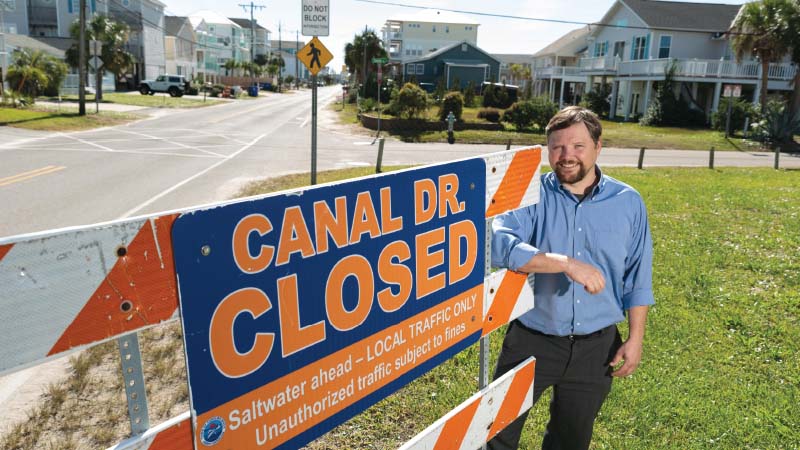 Jeremy Hardison, director of planning and development for the town of Carolina Beach, and other officials and residents have been working on the town’s flooding problem. (Photo by Michael Cline Spencer)
Dale Walters grew up in an area similar to Carolina Beach, where the civil engineer started his retirement three years ago in a house on Canal Drive.

“This is a really nice community. I mean, it’s a lovely place to live,” he said. “It has everything; that’s why I’m here.”

But Carolina Beach, one of the towns along with Kure Beach on Pleasure Island in New Hanover County, suffers from some of the same problems other coastal towns experience.

The community grapples with tidal flooding from the Atlantic Ocean, ongoing growth and the need to balance environmental concerns with the tourist trade. The biggest challenges the town faces, according to Mayor Joe Benson: stormwater and the tidal intrusion on Canal Drive.

That’s why the town formed the Canal Drive Flooding Advisory Committee, of which Walters is the chairman.

“This is a solvable problem,” Walters said. “It’s solvable within normal financial expenditures … it doesn’t require an exotic solution. And we’re looking at something that has to happen here.”

Along with the committee, the town’s planning and development director Jeremy Hardison, and other officials, tackle the flooding concern every day.

“The majority of properties on Canal Drive have bulkheads but some are low or are in poor condition,” Hardison said. “It’s kind of a variety of factors, but they all lead to essentially water on people’s property and in the street.”

The flooding can be caused by heavy rain or tides. King tides, a non-scientific term people use to describe extremely high tides, generally occur when there’s a new or full moon, according to NOAA, and they exacerbate the problem.

“We did a study, and it really determined how high the bulkhead should be to combat these king tides that we’re having,” Hardison said. “They’re not going to block a hurricane, but your nuisance flooding is happening more and more.”

It can happen a couple times a month or about eight times a year, he said.

“But sometimes it kind of lingers,” Hardison said. “It seems like it’s lingering more and more.”

Hardison said the committee has created signage for gates so when water fills the street, the tools prevent cars from driving through and causing wakes.

“When you create a wake, it then goes into people’s properties and creates waves,” Hardison said. “So that was an issue.”

Ignoring the signs can get a driver a ticket.

“It definitely gave police a bit more teeth to enforce,” Hardison said. “If you don’t live on that street, then you really shouldn’t be driving on that street during those conditions.”

A little known fact: Crews built Canal and much of that side of Carolina Beach with the dredge materials from the Intracoastal Waterway, Benson said.

“What ends up happening is the subsurface below Canal Drive, it causes it to buckle and heave because you don’t have a firm foundation under the road itself,” Benson said.

The road stretches about 1.8 miles.

“It’s not necessarily a lengthy road, but consider the traffic on it … now with an expanding shoulder [tourist] season. During the summer, there are thousands of cars going out to [Freeman Park], and that’s the way to get there,” Benson said of Canal Drive.

So what’s the solution? A legal platform, Walters said. 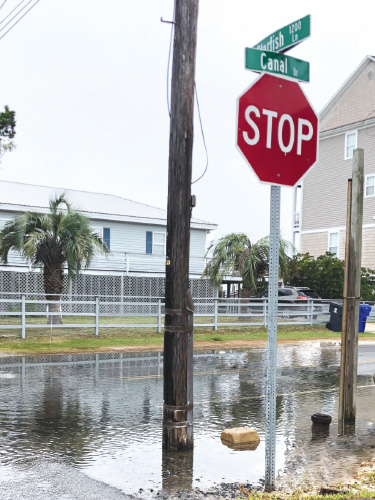 As a result, the flooding committee put together a private/public tidal containment initiative seeking legislative assistance to deal with the issue.

Existing tidal flow barriers are typically a mix of public and private bulkheads, levees and revetments.

The potential legislation, which could be drafted with the help of the Cape Fear Council of Governments too, might apply to other coastal communities.

“It’s not addressing the issues of just one town but possibly many others,” Benson said.

In the meantime, the mayor said, officials want to get the word out about the flooding committee’s work.

“We meet once a month on Thursdays,” Walters said. “We welcome the public. We’re looking for input from the public.”

At the same time, Carolina Beach officials, along with consulting firm Stewart, aim to complete an update to the town’s Coastal Area Management Act plan.

“Through the CAMA plan, Stewart, in partnership with Carolina Beach, is enhancing the town’s resilience and minimizing risk while supporting the existing community,” according to a news release from Stewart.

“It doesn’t restrict development on vacant lots or tell people they can’t rebuild … but what it does say is, ‘Give the town a little bit of space to fix those issues on Canal Drive,’” McLeod said.

Cindy Szwarckop, associate vice president and municipal planning and mobility practice leader at Stewart, elaborated, saying the update will suggest not intensifying development in areas that are prone to flooding.

“They would be less appropriate in that particular location,” she said.

McLeod said, “We’re in the final stages of working through the plan and kind of getting it hammered into shape with the [town’s] steering committee.”

That’s taking place while continuing to engage the public, he said, with the hope of bringing the plan to a winter planning and zoning meeting and hearing.

As the town addresses flooding issues, officials also plan public hearings on the problems Carolina Beach has experienced with its popular northern end attraction, Freeman Park. “We’re going to have a couple of public hearings in November, one on the 13th and one on the 19th, to get some public input on some of the proposed measures to be taken,” Benson said. “There’s a number of them.”

He said, “The town and any of its committees ought not to do anything arbitrary without a purpose statement, and in this case, the overriding purpose is to protect Freeman Park and the natural environment while maintaining the park for public recreation.”

During the summer, the town lost a lot of the park to erosion, rendering half of Freeman Park inaccessible to the four-wheel drive vehicles that congregate there on summer days. So officials gave the town manager the authority to regulate the number of people allowed to drive there.

Determining the number of vehicles allowed isn’t an exact science, Benson said, but he feels maintaining the town manager’s discretion on that number won’t jeopardize the safety of visitors or the environment.

“Mother nature tooketh away, but she may giveth back,” he said. “It could be that the park [gains sand], giving literally more geography on which to recreate.”

And it’s a popular place to do so. About 6,500 people live in Carolina Beach for about eight months out of the year, Benson said, and he estimates that three times that many are there during the summer.

“People live here and work here. I mean, this is not an elitist community,” Walters said. “Real people live here as a friend of mine says, and … it’s a unique element of living at Carolina Beach, and it’s something that needs to be protected.”