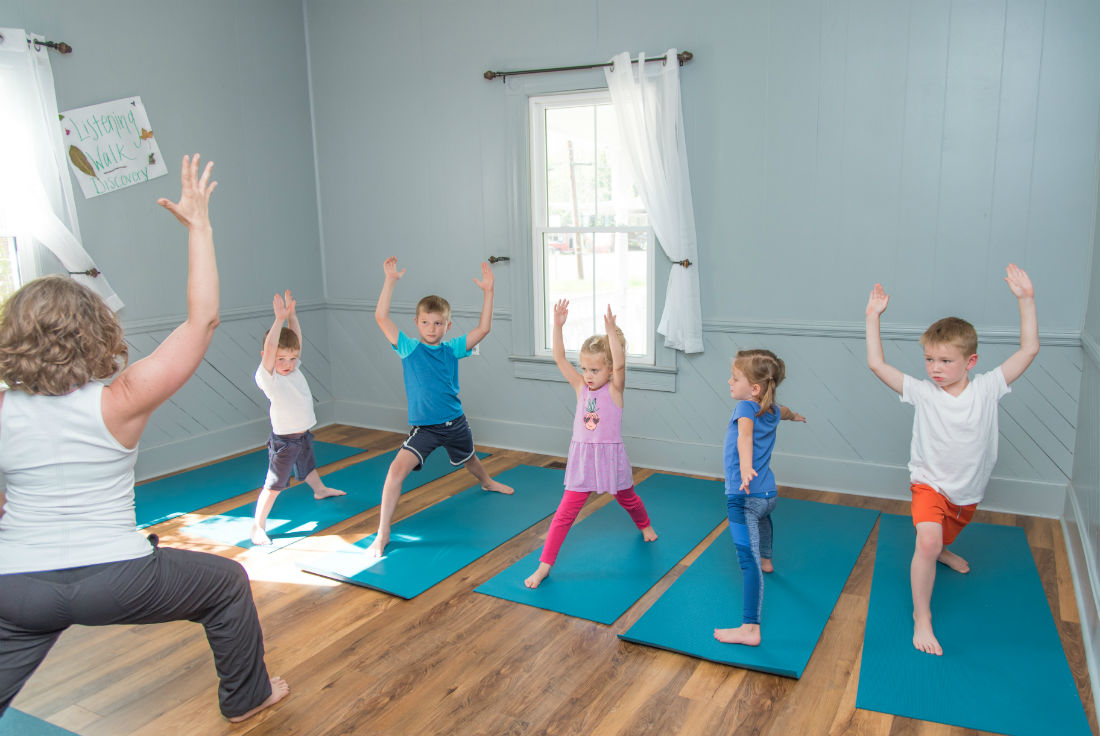 Growga is a startup that recruits, trains and provides yoga teachers with a curriculum; it then places them into opportunities within their communities by partnering with businesses and organizations looking for all-ages yoga programming, said Emily Behr, founder and CEO.

The company, which focuses on children's yoga, started about a year and a half ago and has already garnered 17 yoga instructors, two community ambassadors as well as 18 partnerships, Behr said.

Growga partners with schools and organizations including YMCA of the Triangle, Aetna, Sprout Educational Farm, Tanger Outlets and O2 Fitness, among others.

Its partnership with O2 Fitness is what is bringing Growga to Wilmington; starting in January, Growga will offer yoga and mindfulness classes to all five O2 Fitness locations in the area.

“O2 Fitness came to us because they said that kids’ fitness is something that will help differentiate it, help it get new members and engage its current existing member base, so that's why they came to us,” Behr said.

Currently, it is offering pop-up classes at different locations in the Triangle and Triad area.

Growga first started as a yoga studio is Pittsboro, but soon after, Behr realized there was another business model it could successfully approach.

“As many businesses do, you start out as one thing and you transition,” she said “Shortly after starting, we found that the opportunities were out in the community. And so, we started to build relationships and begin to work with these partners.”

While Growga teaches classes for all ages, its focus is on teaching children social and emotional skills through yoga, she said, which is why it has partnered with different private and charter schools in the Triangle.

“Babies get a ton of benefits from practicing yoga with their parents,” she said. “As young as three months old, we offer "Baby and Me" classes and then once the child is around two, they're able to learn and implement some yoga practices on their own.”

“It started out as an add-on, but now it's kind of grown into an additional offering,” she said. “We do mindfulness or yoga in the workplace for employees. We work with all range of size of businesses, so everything from a startup to a larger organization.”

In November, Growga will have an online training session for Wilmington residents with a background in yoga instruction who are interested in teaching for Growga.

Behr said Growga will hire about 10 to 12 instructors in Wilmington to start off with.

It will also hire a community partner who will help recruit more partnerships in the area.

“O2 is just the beginning. We're using this as an opportunity to launch fully in the Wilmington market,” Behr said. “We will not only be partnering with O2, but we'll be recruiting partnerships with schools, youth organizations and corporations that are interested in unique, all-ages programming, whether it's employee mindfulness or kids yoga.”

Behr, who has a background in yoga instruction as well as managing yoga studios, said she hopes to continue to grow the company and provide a resource for yoga instructors looking for work.

“There is an oversaturation of instructors out there in the market that are looking for opportunities,” she said. “We're in a unique position to be able to help those instructors and really match them with different job opportunities in their markets.”