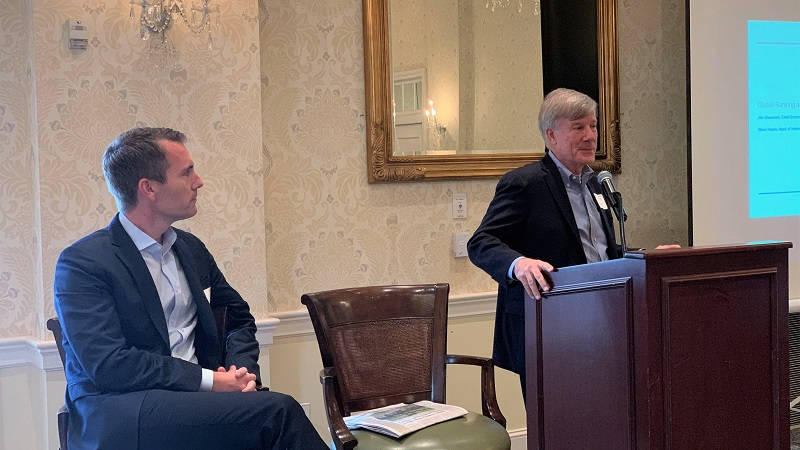 Two JPMorgan Chase & Co. executives joined local business and community leaders in a discussion about the economy and some of the trade challenges in the global marketplace.

Jim Glassman, managing director and head economist for commercial banking, and Steve Hayes, head of middle marketing international banking, each offered insight into those topics before an audience of more than 50 people Friday at Cape Fear Country Club.

The event was hosted by the N.C. Foreign Trade Promotion Council (FTPC), which is an organization that aims to educate private businesses about the opportunities available to facilitate and promote international trade.

It's one of several events FTPC is hosting this fall. In October, the council is looking to bring in Dutch representatives to explore opportunities in Southeastern North Carolina.

"We've been working with the Dutch embassy and  ... the brand new consul general from the Netherlands will be here," said John Hayes, the executive director of the FTPC.

"They're particularly focused on identifying locations in North Carolina to have Dutch companies locate their businesses. So it's very important that our business community [attend]," he said.

Steve Hayes discussed some the impacts of trade issues in China, the United Kingdom and other foreign markets, and how U.S. firms can respond.

With the UK's position in the European Union still uncertain as the Brexit deadline approaches in October, some businesses, he said, could shift potential expansions or future investments from the UK and into other nearby countries in the EU.

In business dealings or responses to the tariffs involving China, the bank has been encouraging businesses to get invoices from suppliers in both U.S. currency and in Chinese currency -- renminbi, or the Chinese yuan -- to get the benefits of that foreign currency's devaluation.

Another tactic is the shift in suppliers from China to countries farther south in the Asian continent, such as Vietnam or Malaysia.

"Really in the last month or two what we are seeing is sort of bigger, midsize companies are now starting to think rather than invest further in China .... they are looking to invest those funds into Vietnam or Malaysia or Thailand and just diversify that supply chain," he said, adding that China is also no longer quite what it was as a low-cost manufacturing location.

This might signal a shift in the Chinese middle class and the country could become more of a power player in the global economy, he said.

The U.S. economy, however, could remain more stable than what some are predicting. That's according to Glassman, who said that although the U.S. economy is slowing, in his opinion, there are no real indicators that the economy could shift into a recession soon.

"I know what people are saying: there's possibly a recession. But when you look around and you try to figure out, is there anything out there that rhymes with the things that we know have been a problem? It's really hard to find that," he said.

The next FTPC gathering is scheduled to take place Oct. 30 at Cape Fear Country Club.