Hurricane Dorian: 'We Dodged A Bullet On This One' 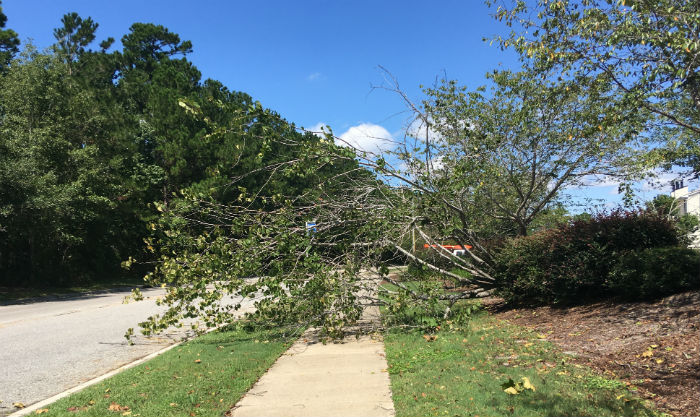 Downed trees, like this one near South 17th St., and power outages were the result of Hurricane Dorian as it passed through the region. Larger damages were felt in Pender County where a tornado landed. ( Photo by Johanna Cano)
After Hurricane Dorian passed through the region with gust winds of up to 75 miles per hour and pouring about 10 inches of rain in Wilmington, counties, organizations and businesses are beginning to assess damages and restarting operations.

“We have made it through Hurricane Dorian and while the storm did cause damage to our community, we are thankful that it wasn’t any more,” Jonathan Barfield, New Hanover County Board of Commissioners chairman, said in a briefing Friday. “Now our recovery efforts are underway. We continue to operate our Emergency Operations Center 24/7 to ensure everyone in our community has the resources they need to recover from the storm.”

Residents from the towns of Carolina, Kure and Wrightsville beaches, as well as Figure Eight Island, who received mandatory evacuation orders were able to come back to their homes after orders were lifted this morning and bridges opened at 9 a.m. Friday, said Kate Oelslager, public information officer with New Hanover county.

The city of Wilmington had minimal damage, Wilmington Mayor Bill Saffo said at the briefing.

“The city’s assessment teams have been out and about early this morning and I can say that the city fared exceptionally from this event,” Saffo said. “We had a couple of downed trees and obviously people without power, but the city did very well.”

As of noon Friday, there were more than 9,000 customers without power in the Wilmington region, according to Duke Energy.

The potential for a major flood of the Northeast Cape Fear River near Burgaw was downgraded Friday morning to the possibility of minor flooding, according to what was expected to be the final Dorian river flood briefing by Rick Neuherz, hydrologist with the NWS office in Wilmington.

Organizations and businesses in the area started reopening Friday.

Wilmington International Airport (ILM), which closed to commercial traffic Wednesday, has reopened with Delta Airlines as the only airline operating as of Friday morning, according to the airport’s website.

The first Delta flights to and from Atlanta started around 11 a.m. this morning.

American Airlines and United Airlines will not have flights to and from the airport on Friday nor will the ticket counters be open to customers.

While the airport is open, other tenant services may be limited based on staff availability.

According to its latest update, the North Carolina Ports has completed its initial damage assessment and has found that there is no significant damage to the Port of Wilmington.

The Port of Morehead City is still undergoing damage assessment with an update expected later this afternoon.

Both ports closed Wednesday ahead of the storm, but officials are working to reopen both ports to commercial activity soon, with gate hours to be released later today.

Manufacturer Rulmeca Corporation, located at 3200 Corporate Drive, announced via email that it sustained no damages and will resume operations Monday.

Counties are also determining the effects of the storm.

New Hanover County is working on recovery efforts and assessing damages as of Friday morning, according to a news release. A debris pickup plan is being finalized.

New Hanover County residents who sustained damage can report it at
tax.NHCgov.com by submitting a Hurricane Dorian Property Damage Report.

The county is also helping the New Hanover Disaster Coalition which is recruiting volunteers at NewHanoverDisasterCoalition.org. The coalition and county are also providing support to World Central Kitchen with community feeding efforts.

While Hurricane Dorian did not leave behind the type of damage that Florence did a year ago, the region did not emerge unscathed, with closed roads and tornadoes that touched down in the region.

As of Friday morning, several roads in the area were impassable or closed, according to the New Hanover County Sheriff’s Office.

A confirmed tornado touched down in Pender County, leaving considerable damage to homes and businesses including Scott Hills Market, whose owners and helpers were busy Friday morning with clean-up efforts.

While the size and extent of damage caused by the tornado are not yet known, a video did show its appearance in Pender, said Steven Pfaff, warning coordination meteorologist with the National Weather Service.

“We are tired but thrilled we didn't experience more damage than we did, which was minimal,” said Tammy Proctor, Pender County tourism director and public information officer.

Proctor said the county experienced several tornadoes, with the most damaging at Scotts Hill Market ,and it also received warnings south of Paul’s Place Famous Hot Dogs at Rocky Point to Long Creek.

“We are monitoring our flood gauges and it appears the flow is consistent and will not be disastrous,” Proctor said. “We will see higher levels Sunday night and we may see some water over waterways.”

With the forecast for river flooding downgraded, Pender County should be fine, Proctor said.

Pender County is currently working with other organizations to aid in storm damage recovery.

“We will have residents in need when the storm is over,” Olivia Dawson, relief and volunteer coordinator with the county, said in a news release. “We want to coordinate these efforts between groups and volunteers to meet the needs across Pender County.”

Other communities are also receiving aid after the storm.

Cedric Harrison, founder of Support the Port Foundation, said there is minimal damage to the underserved communities that the nonprofit helps.

“There doesn’t seem to be any major damage, just people having to sacrifice not working for a few days,” Harrison said in an email.

Hot meals were scheduled to be given out at Warner Temple Ame Zion Church at 620 Nixon St. at noon, he said.

Smith also recently opened another Fork n Cork location at Carolina Beach which is slated to re-open with a limited menu by 4 or 5 p.m.

“We did very well,” Smith, who also owns Bone & Bean BBQ and Smoke on the Water, said. “We are trying to gather staff and take inventory of what we have.”

Because it was unknown how much damage Hurricane Dorian would cause in the area, most truck deliveries of food were delayed, Smith said.

“We stay pretty stocked up, but given last year's experience with Florence we didn’t want to sit on a whole lot of food that may or may not go bad based on power outages,” he said.

Smoke on the Water will reopen with a full menu at 4 p.m. Friday and Bone n’ Bean also reopened Friday.

Currently, Smith is trying to gather staff for the restaurants; many of the workers at the restaurants are University of North Carolina Wilmington students who had to evacuate.