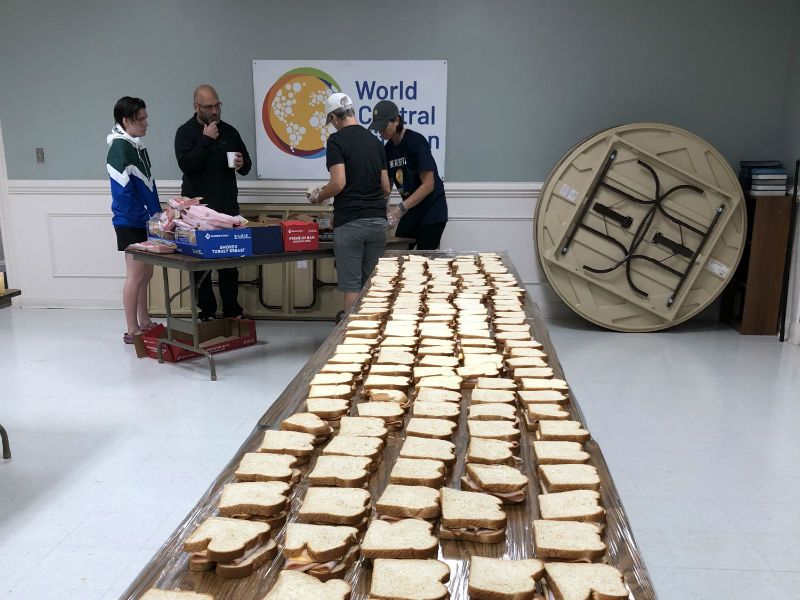 World Central Kitchen volunteers prepared more than 200 sandwiches Thursday morning ahead of the arrival of Hurricane Dorian. (Photo courtesy of Christi Ferretti)
World Central Kitchen, a nonprofit that delivered 300,000 meals in Wilmington and Raleigh during Hurricane Florence, is back in Wilmington with volunteers, including area chefs and business owners, who started food preparations Thursday morning.

“I volunteered last year during Hurricane Florence and I was in contact with some folks that are key players with the World Central Kitchen organization,”  said Christi Ferretti, chef and owner of Pine Valley Market. “As Hurricane Dorian progressed, I received a message to be ready. We’ve been working for the last couple of days getting ready for volunteers to get to work. My role is to oversee what is being made and making sure that quality control is there, cost control is there and that we are making enough of each meal to account the needs that are coming in.”

This time around, the World Central Kitchen has set up headquarters at St. Andrews-Covenant Presbyterian Church at 1416 Market St. where about six volunteers prepared more than 200 sandwiches Thursday morning for quick and easy delivery immediately after the storm, said Vic Roberts, volunteer and owner of Sola Salon Studios in Wilmington.

Currently, volunteers with the organization are waiting until the storm has passed and it is safe for them to go back to the church to begin preparing hot meals.

“We have a truck coming stocked with enough food for 10,000 hot meals,” Ferretti said.

World Central Kitchen’s operations in the region are part of after-storm recovery plans in the county.

That includes coordinating with World Central Kitchen for post-storm meals for those in need.

"I'm honored that they came back to our community again after being here during Hurricane Florence," Barfield said.

This time, World Central Kitchen is working with the New Hanover Disaster Coalition, which will determine when and where food will be distributed based on demand, Ferretti said.

“It’s a different situation this year. Diamond Foods Kitchen was such a huge space and we had such huge efforts and had hundreds of volunteers,” Ferretti said. “This year, because the county is utilizing other services for the shelter and the Emergency Operations Center has catering from a local vendor, we are not doing the mass canvassing from last year.”

But the organization still needs volunteers for when it begins preparing hot meals.

There will be a list on the SignUpGenius site where people can volunteer for different shifts throughout the day. People interested in volunteering should stay tuned to the organization's Facebook page.

While a menu for the hot meals is not yet set, chefs will be working with ingredients available to make a variety of dishes.

“As this organization has grown and learned, it's been able to fine-tune things so we have a very well stocked truck,” Ferretti said “We have the ability to do different ethnic cuisines just to change things up for people. The kitchen will be run by local chefs who will be able to create their dishes based on what's available.”

World Central Kitchen is a nonprofit founded in 2010 by celebrity chef José Andrés with a goal of providing meals in the aftermath of natural disasters.

"To our dear friends of Wilmington North Carolina, I hope things will be okay during this hurricane. One of the best moments on my life was being there with many of you covering the food needs of everyone in Wilmington and many other parts of North Carolina," Andrés said in a video tweet Thursday. "I'm not there with you because I am here with the team serving the great people of the Bahamas, but we have some of our best team members there with you in Wilmington partnering with the EOC, the governor and with all the community of Wilmington, which is the best."

The most tangible gift you can give someone is a hot meal, Ferretti said.

“This is my way of coping. I cook and that is how I deal with stress,” Ferretti said. “To think that less than 365 days and they (World Central Kitchen) are back is surreal and very unexpected. I hated that they had to come back, but glad we're on their radar this go-round. We have people ready to jump in get into action quickly.”