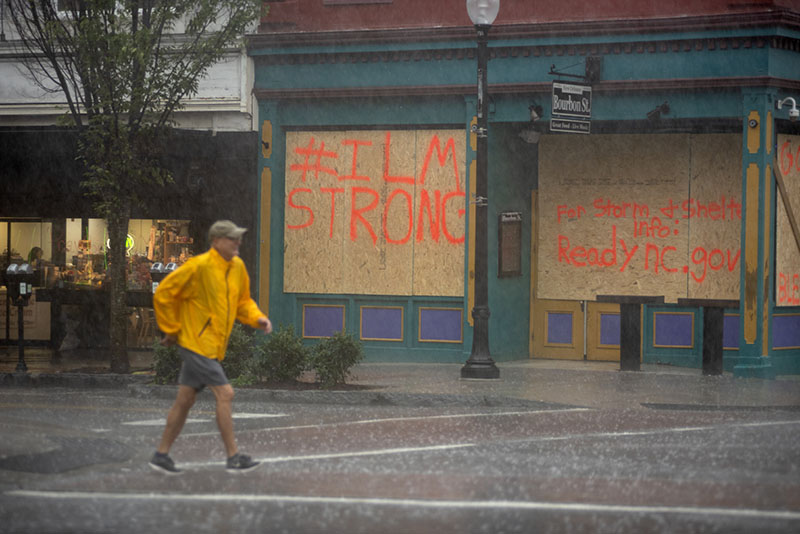 Rain from Hurricane Dorian drenches downtown Wilmington on Thursday. (Photo by Michael Cline Spencer)
Hurricane Dorian's rains brought the Wilmington area the threat of flooding Thursday along with increasing winds, which were expected to continue through part of Friday.

In Pender County, which includes areas that were devastated last year by Hurricane Florence's floods, the potential exists for major flooding along the Northeast Cape Fear River in the coming days, forecasters said.

A river flooding forecast issued Thursday afternoon said the river near Burgaw is expected to crest at a height of more than 16 feet in a major flood Sunday or Sunday night.

As a result, the forecast said, floodwaters will likely begin infiltrating homes and affecting roads, including White Stocking Road and parts of N.C. 53 and N.C. 210.

Meanwhile, potential tornado damage was reported Thursday, and the full impact of the wind and rain remained to be seen as Dorian's sprawl continued its onslaught.

The National Weather Service expects up to 15 inches of rain to fall as a result of the hurricane, with the possibility of more in some areas.

"We've got a long road ahead of us between now and tonight," said Steve Pfaff, Wilmington-based NWS meteorologist, during the Thursday morning briefing.

During a noon news conference, New Hanover County officials said winds would be at tropical storm speed until 1 p.m., when they would increase to strong tropical storm force winds of 58 to 73 mph.

Steven Still, the county's emergency management director, said, "We anticipate that those winds are going to stay around our area until about 6 p.m."

Around 6 p.m., he said, forecasters expect even stronger, hurricane-force winds to start blowing through until 1 to 2 a.m. Friday, with a potential peak of 105 mph.

Residents in the Wilmington area's tri-county region of New Hanover, Brunswick and Pender counties were inundated with tornado warnings early Thursday morning and then again in the afternoon.

Asked where the tornadoes might have touched down in the morning, Pfaff said, "We have reports in North Myrtle Beach, Little River, sections in Columbus County, sections in Brunswick County and also in Pender County. There's maybe three or four counties that have had impacts from tornadoes."

One of those potential tornadoes at about 7 a.m. might have been 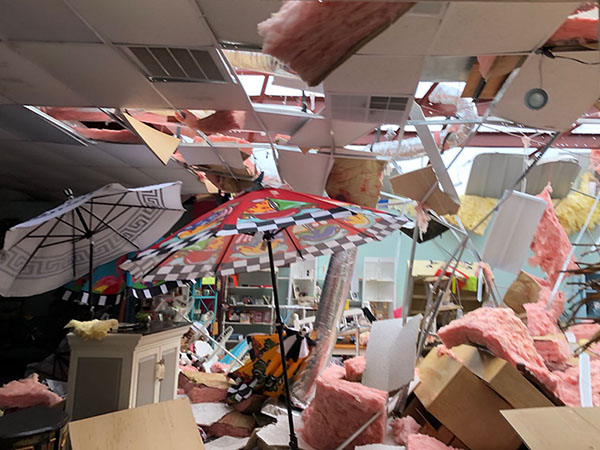 the cause behind heavy damage at Scotts Hill Market, 11135 U.S. 17, where owners Lisa and Joel Humphrey found damage to the roof and store (right).

A video shared by a fire station in Pender County showed a tornado swirling near the station on U.S. 17 near Sidbury Road.

The early morning tornado threat has since moved to the Jacksonville area, Pfaff said, but the potential for tornado remains as more bands from Dorian come through.

Tornado surveys will be conducted after the hurricane blows through and when it's deemed safe to do so, Pfaff said, possibly this weekend.

Scattered power outages were reported Thursday morning, and 1,300 Duke Energy customers were without power in the Leland area around 11 a.m., according to Duke Energy's online power outage map.

Also Thursday morning, New Hanover County officials asked residents who needed to go to a shelter to go to Eaton Elementary School because the Codington Elementary shelter was at capacity and Blair Elementary's was nearly full.

Pender County's Emergency Management officials announced Thursday morning that residents can text (910) 620-9405 for non-emergency questions, ask them on Facebook or email [email protected] them to the Emergency Operations Center.

“We urge residents who reside in travel trailers, substandard housing, and in low-lying area to seek shelter," Pender County Emergency Management director Tom Collins said on the department's Facebook page. “Hurricane Dorian will spawn tornadoes and later we will face hurricane force winds. Seek shelter before we reach the height of the storm.”

In Wrightsville Beach, some people who did not heed evacuation orders are being criminally charged, said Dan House, the town's chief of police, during an 11 a.m. briefing streamed live on the police department's Facebook page.

As for storm impacts, he said, "We continue to anticipate storm surge" with swells of 4 to 6 feet.