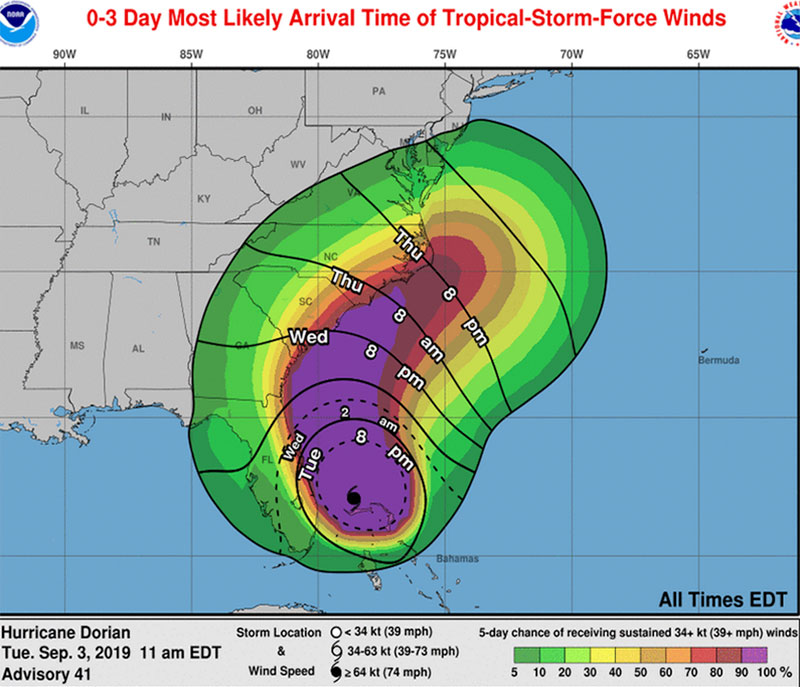 The National Weather Service's prediction for when tropical storm-force winds could reach the area
The towns of Carolina, Kure and Wrightsville beaches as well as Figure Eight Island will be under mandatory evacuation orders starting at 8 a.m. Wednesday, county officials announced.

The evacuations for residents and visitors comes as the area readies for Hurricane Dorian, now a Category 2 storm that is expected to pass near the North Carolina coast Thursday.

As part of the evacuations, county officials are saying that residents and visitors should be off the barrier islands and out of low lying areas by 5 p.m. Wednesday and in a safe place by 8 p.m.

Residents who live flood-prone areas or parts of the county that might experience storm surge impacts also would be under a voluntary evacuation starting Wednesday morning, county and emergency officials said during a press briefing. That voluntary evacuation extends to those who live in “travel trailers, mobile homes or homes still damaged from Hurricane Florence,” according to a press release.

Southeastern North Carolina is now under a hurricane watch and a storm surge watch, the weather service reported.

“One of the issues we experienced prior to Florence is we had substantial saturation prior to the oncoming rains of Florence that drove a lot of those flooding issues that we had with transportation,” Still said. “We don’t have that in place now with Dorian. We’re just now coming out of really a drought.”

He said there could be potentially be ponding on Interstate 40 and U.S. 421, but they are not expecting the major roadways to flood over and cut off access like after Florence.

“One to three feet of storm surge, with potential of higher localized areas, is expected near the county’s major waterways including the Cape Fear River and Intracoastal Waterway, as well as inland along the county’s creeks including Pages, Howe, Bradley, Hewlett’s, Whiskey, Motts, Barnard, Burnt Mill, Smith and Ness Creeks,” the county’s press release stated. “Residents in these areas are under a voluntary evacuation, and a more detailed list of those creeks and their locations can be found here.”

The county also has an online map that residents can use to look up their address on the storm surge forecast map to see if they are in one a surge-prone areas. That can be found here.