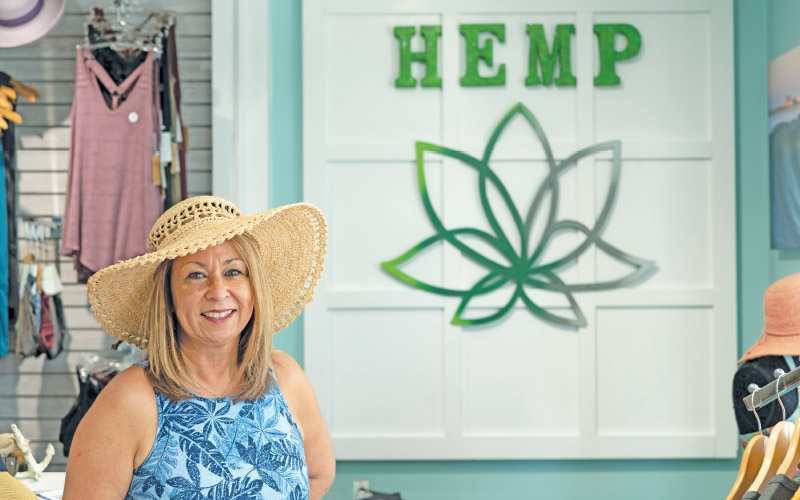 Melissa Becker and partners decided to open Coastal Hemp Co. in Porters Neck in June following the growing popularity of hemp and CBD products in the market. (Photo by Michael Cline Spencer)
When the 2018 Farm Bill passed last year, also known as the Agriculture Improvement Act of 2018, it removed cannabis and cannabis derivatives that have low levels of THC from the definition of marijuana in the Controlled Substances Act, legalizing hemp-based products at the federal level.

That, plus the growing consumer use of cannabidiol, commonly known as CBD, further opened a market for hemp farming, producing and selling.

One business that recently opened in Wilmington, Coastal Hemp Co., sought to enter the lucrative CBD market, said co-owner Melissa Becker. Hemp refers to the cannabis plant itself, especially when used for its fiber, while CBD is an active ingredient derived from the hemp plant used by many to address a variety of health issues.

Becker’s store, at 8211 Market St. in Porters Neck Center, offers a variety of CBD products as well as eco-friendly, organic clothing. It joins a number of other hemp and CBD stores in the Wilmington area, including The Hemp Farmacy, Your CBD Store and Tree BD Products. Larger retailers, such as Earth Fare and Whole Foods, also carry some CBD items.

“We love natural organic products in the market,” Melissa Becker said. “Reports show that it was a very promising market, as well as CBD. It was really a matter of reviewing and doing a lot of research into CBD.”

“The primary cause of market growth is the entrance of chained retailers,” stated the report. “Large pharmacy, retail and grocery chains are entering the market with a wide variety of large-scale pilot programs. Given their reach, scalability and mainstream familiarity, those in this distribution channel are expected to garner 57% of market revenues in 2019.”

Tinctures, concentrated liquid extracts, remain the largest part of the market, followed by topicals, vape oil/cartridges and capsules, according to the report.

Customers in their 20s up to 83 years old have been coming into Coastal Hemp Co. looking for CBD products for their pain and for their pets, Melissa Becker said.

She said going into the CBD business was tricky because of the still-emerging research and regulations on CBD and connotations people have with CBD and marijuana. 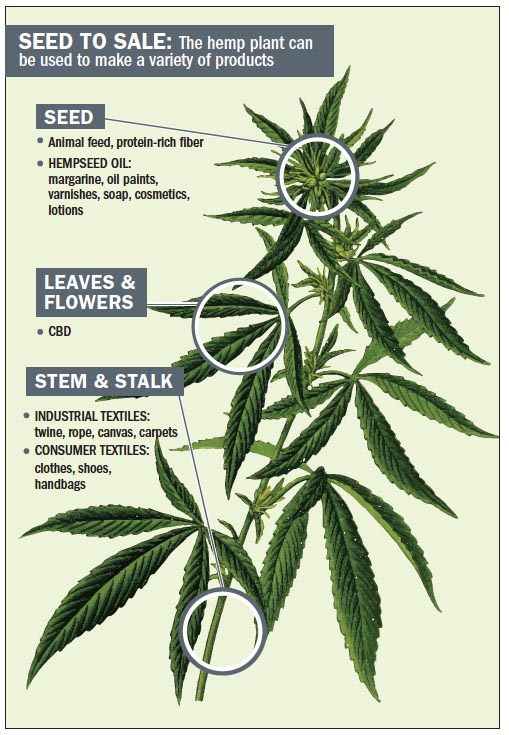 Both hemp and marijuana are part of the cannabis plant family. Hemp primarily has the chemical compound CBD (cannabidiol) while marijuana has high levels of THC (tetrahydrocannabinol), which is what gives people a “high.”

The hemp plant can be grown for its seed, fiber or floral materials. The fiber, derived from the stalk and stem, can be used to manufacture twine, construction materials, carpeting, clothing and even prosthetic legs, as developed by Wilmington startup ecoTEKindustries.

Renaissance Fiber, a Wilmington- based company, produces fiber from hemp with a focus on textile- quality fiber for yarn production.

The seeds are used for food and hempseed oils, which can be used for industrial products as well as soaps and cosmetics. The leaves and flowers are where the CBD can be found.

CBD’s health benefits are promoted by those who share personal anecdotes of finding relief from pain, depression and anxiety, among other conditions. But more research is underway to examine the therapeutic outcomes of CBD.

Currently, the U.S. Food and Drug Administration is working to learn more about the safety of CBD to create a regulatory framework for the non-psychoactive compound.

Amy Abernethy, principal deputy commissioner of food and drugs at the FDA, said in July tweets that the FDA is expediting its clinical trials to address questions about CBD, with a report on the FDA’s progress expected to be released by early fall.

One prescription CBD drug, Epidiolex, was approved by the FDA in 2018 and is used to treat seizures caused by two rare and severe forms of epilepsy, Lennox-Gastaut syndrome and Dravet syndrome.

Under the Federal Food, Drug and Cosmetic Act, adding CBD to food or marketing CBD products as a dietary supplement is generally prohibited unless the agency makes an exception.

However, foods infused with hemp oil are legal, while those with pure CBD extract are not, wrote Rod Kight, an Asheville-based attorney specializing in the cannabis industry, in an article.

While the FDA has not banned all edible CBD products, it has warned manufacturers who have made unapproved health claims for their CBD products, or who have misrepresented CBD amounts.

North Carolina laws mirror federal laws, making certain foods with CBD also illegal in the state, according to the N.C. Department of Agriculture and Consumer Services.

The department has sent out letters with information on what is legal to sell in the state to manufacturers and retailers that sell products containing CBD, a news release stated.

Because of all the legal complexities surrounding hemp and CBD, Melissa Becker attended a Business and Law of Industrial Hemp course held by N.C. State University and developed by Marne Coit, agricultural law lecturer with N.C. State.

“It was the first academic course on hemp to be taught at N.C. State, and one of the few in the nation that covered law, business and production,” Coit said. “There was an inclass component with guest lecturers who are professionals working in the industry, as well as site visits to farms, processors, labs and a retail store where students were able to learn from and connect with business owners.”

To ensure the products carried at Coastal Hemp Co. are safe and effective, Melissa Becker says she reviews the products using her previous experience as a nurse practitioner in new drug research, including at Wilmington- based PPD, to gauge for quality and safety, she said.

“It was a matter of looking into what the regulations were,” she said, “looking at legally where we were with it and what we could do to really ensure that any consumers purchasing our products knew we did our due diligence.”

Some of the indicators Melissa Becker looks into before including items in her store include CBD extraction; the merchant’s certificate of analysis, which lists what is in the product and whether the company is Good Manufacturing Practice compliant, which reviews labeling and quality.

Melissa Becker said her research is necessary because of pending FDA and U.S. Department of Agriculture regulations on CBD and hemp. She said when regulations are in place, it should make it easier for her to choose products for the store.

Before the 2018 Farm Bill passed, North Carolina’s legislature had set up an industrial hemp pilot program in 2016 with temporary rules adopted in 2017.

Under those rules, starting in February 2017, farmers in the state who want to grow industrial hemp must apply to the Industrial Hemp Commission to receive a license.

As of July12 this year, 1,214 licenses had been issued by the commission with seven growers in Brunswick County and nine in New Hanover County, according to the N.C. Department of Agriculture. About 100 licenses were approved in 2017 and 350 in 2018.

Rules established by North Carolina’s hemp commission are in place until the USDA develops its Hemp Production Program after which each state can submit a plan for a state program that follows USDA rules.

Coit said the state’s 2019 Farm Act, which was awaiting House approval as of press time, will be used as guidance for the state’s hemp program plan.

The N.C. Farm Act of 2019, a 29-page bill, 20 of which cover hemp regulations, declares that hemp is a viable agriculture commodity in the state and details that the cultivation, processing, expansion and research of hemp should be promoted.

The bill had a contested regulation that would ban smokable hemp in December because of its similarity to marijuana, making it difficult for law enforcement to discern between the two.

A legislative committee met in July and a compromise was reached on the farm bill, already passed by the Senate, that bans smokable hemp in late 2020, which is intended to give lawmakers time to find a kit to test for THC.

A ban on smokable hemp would affect farmers, Coit said.

“Based on our current laws, farmers have invested significant capital into infrastructure to grow hemp, some for smokable flower,” Coit said. “If the ban goes into effect, it will have a direct impact on their businesses, as well as on others in the supply chain. The earlier it goes into effect, the bigger the impact it would have.”

While navigating regulations and research, Melissa Becker also had to overcome being denied rental space for the store because it sells CBD products.

“Some landlords were not comfortable with having [CBD] retail places within their areas. A lot of them associate that if you’re going to sell CBD that you’re a vape smoke shop,” she said. “We did want to change that model for our company to make it more comfortable for people to come into.”

She said the recent growth of CBD and hemp stores in the area requires retailers to educate customers on hemp and CBD, which can help clear some of the uncertainties surrounding it.

“It is becoming so popular and if we’re going to go ahead and sell to the population, we need to be responsible retailers. From reading studies in other countries, watching a lot of videos, going to seminars, reading hundreds of articles, that’s when really hit home for me,” she said. “It was something I felt was worthwhile enough to invest in.”