Manufacturer On Board To Invest $25M 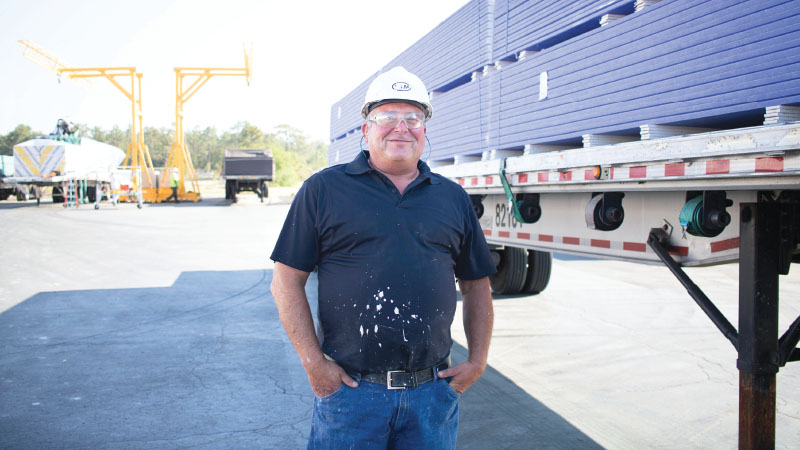 Lance Davis, plant manager at National Gypsum’s Wilmington plant, said he couldn’t pass up on the opportunity to move to Wilmington when the plant reopened in 2018. (Photo by Terah Wilson)
With its proximity to the Cape Fear River and customer markets, the Wilmington area provides an essential location for National Gypsum, a gypsum board manufacturing company that plans to invest $25 million in its Wilmington plant over five years.

The plant, at 838 Sunnyvale Drive, had been operating in the Cape Fear region since 1979 but closed in January 2009 because of the 2008 financial crisis, which brought construction activity to a screeching halt and severely impacted demand for drywall, said Beth Straeten, National Gypsum’s director of corporate communications.

The Charlotte-based company reopened its Wilmington plant in November 2018 and hired Lance Davis as plant manager.

Davis was most recently the plant manager at National Gypsum’s plant in Long Beach, California.

“I’ve been with National Gypsum for more than 20 years, and it’s a great company that values its associates and rewards performance,” Davis said. “The opportunity to bring the Wilmington plant back online and be part of this exciting region was something I couldn’t pass up.”

Resuming operations in the area was partially influenced by an incentives package from New Hanover County and the city of Wilmington that provided $580,000 over five years with the goal of creating jobs and capital investment.

“We’re thrilled to be up and running in Wilmington again, thanks to the strong economy,” Straeten said. “Our location on the Cape Fear River is critical because of the deep-water access we need to bring gypsum rock in by ship.”

The plant currently has 60 associates, many of whom previously worked there before it closed.

Gypsum board, a wallboard made of gypsum (calcium sulfate) that is attached to studs to create finished wall surfaces, can be installed much faster than traditional plaster walls.

The Wilmington plant currently makes the company’s flagship gypsum board product, Gold Bond, including mold- and moisture-resistant XP Gypsum Board, as well as eXP glass mat sheathing, which are both part of the PURPLE family of products, Straeten said.

To make these products, the plant uses gypsum rock, which is shipped to the plant from National Gypsum’s quarry in Nova Scotia. The company operates its own deep port dock in Wilmington and occasionally works with the Port of Wilmington for shipments.

“The bulk and weight of gypsum rock makes access to a deep-water marine terminal essential,” Straeten said, “and that’s what makes our location here unique.”

The paper used in the production comes from 100% recycled paper produced at its paper mills in Alabama and Pennsylvania, she said.

To make the wallboards, crushed and baked gypsum is mixed with water and other ingredients to form a stucco slurry. The slurry is then sandwiched between two sheets of paper, cut into lengths and dried.

Wallboard can be shipped within a few hours of production and can be transported by truck or by train for larger clients. To expedite shipping, National Gypsum has a network of wallboard plants near major metro areas, according to the company’s website.

“A lot of the gypsum board made in Wilmington is used locally to support the booming coastal North Carolina economy. We were also fortunate to receive state support for a new rail spur that will allow us to expand our geographic reach” Straeten said.

With more than 40 operating plants, mines, quarries and support facilities, National Gypsum is the second-largest drywall manufacturer in the U.S. and the largest American- owned manufacturer of wallboard.

The global gypsum board market size was valued at $37 billion in 2018 and is expected to have a compound annual growth rate of 11.4% from 2019 to 2025, according to a Grand View Research industry report.

Demand for infrastructure facilities in residential, commercial and institutional sectors have surged the demand for gypsum boards, stated the report.

Wallboard production costs depend on the manufacturing location, which affects raw material availability, according to the report, giving companies that do their own gypsum mining, like National Gypsum, an advantage over others who do not.

“It’s a combination of commercial and residential construction,” Straeten said about where most of the demand for their products is coming from. “Both sectors are strong right now because of an improving economy, as well as ongoing hurricane recovery efforts.”

Since reopening, the plant has achieved its promise of creating 51 jobs with average salaries of $57,000.

“We’re proud to say we have already exceeded our job creation and salary commitments for the Wilmington plant, and we’re on track to meet our commitment to invest $25 million in the plant over a five-year period,” she said.

With a growing gypsum board market, the company stands out from competitors thanks to its customer service and product innovation, she said.

“Our team here in Wilmington is responsible for making the best product available and getting it to our customers when they need it,” Davis said.