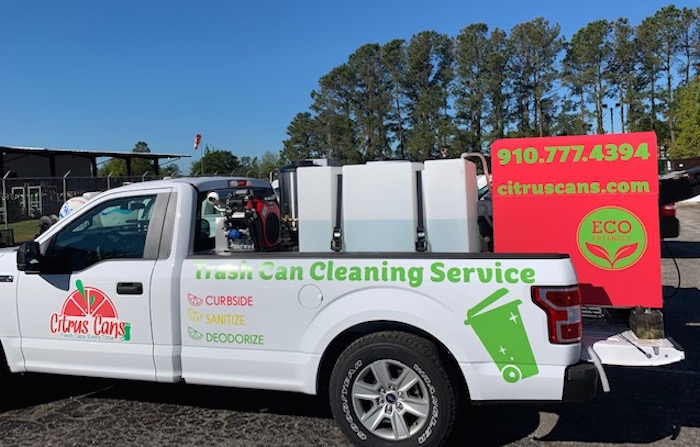 Citrus Cans sends its special bin-cleaning truck to wash residential trash containers. (Photo courtesy of Citrus Cans)
What started as an idea for her son to earn some spending money has turned into a business for Wilmington resident Leigh Coudriet.

A couple of years ago, Coudriet suggested to her teenager that he could make money by washing out the neighbors’ trash cans. More recently, she mentioned that idea to a colleague, Kim D’Erminio, who mentioned that her sons had done the same thing in their former Cincinnati neighborhood.

The two women decided to look at the potential for a bin-cleaning service and discovered that other entrepreneurs were doing just that.

“We had no idea it was an entire industry; it just hadn’t gotten to Wilmington yet,” she said Wednesday. “It’s been in Europe for 20 years and in the U.S. for eight.”

The women did a lot of research online and discovered companies based in the Midwest, Colorado and Texas that are franchising their residential and commercial trash bin-cleaning business. Such companies are also springing up in upstate South Carolina, Charlotte and the Triangle area.

After purchasing a custom-made truck and testing their capabilities, Coudriet and D’Erminio are ready to roll with their new company, Citrus Cans.

“Everything is biodegradable and eco-friendly,” Coudriet said of the materials and processes Citrus Cans uses. “Some [companies] do dumpster cleaning and power washing. We are focused on the residential customer including HOAs; that’s our little niche.”

Floyd Lacy has operated a similar business for two years. He launched Santastic Cans in 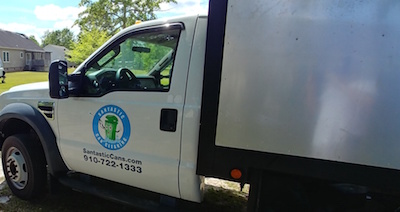 Leland after designing and building his own truck and is in the process of building a second one, he said. Santastic Cans services both residential and commercial customers and has found a ready market for his services.

Lacy came to his business concept partly through environmental concerns after seeing people scouring their own bins.

“I’m a fisherman and a hunter, and I am concerned about proper disposal of wastewater,” he said Wednesday. “Trash cans have all kinds of germs in them – E. coli and other harmful bacteria – and I don’t want that going into our streams and estuaries.”