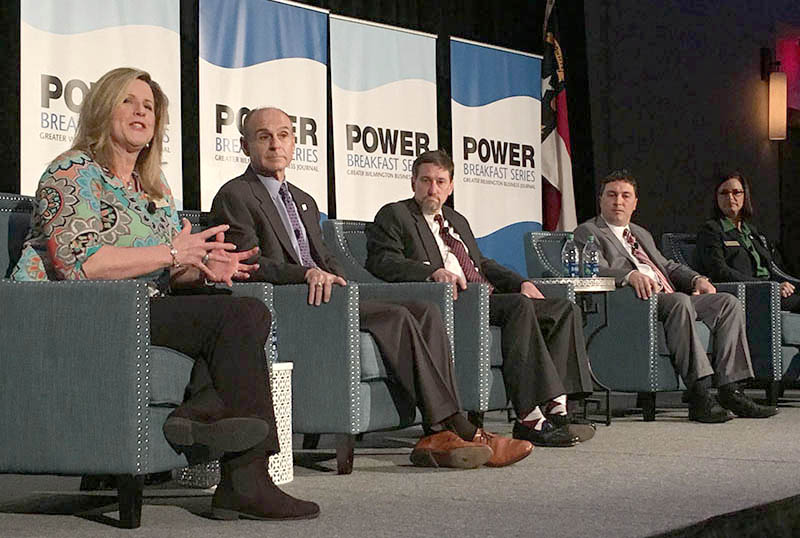 Speaking to a sold-out crowd of nearly 500 Tuesday morning at the Wilmington Convention Center, panel members shared the concerns and needs of their organizations, currently and down the road.

Business at both the Port of Wilmington and at Wilmington International Airport was very good in 2018, their directors reported. And demand for enhanced capacity is driving improvements at both facilities.

Paul Cozza, executive director of the N.C. State Ports Authority, told the audience that a new neo-Panamax crane will arrive at the Port of Wilmington in April, the week after the N.C. Azalea Festival. The crane is part of a major expansion and modernization initiative at the port that is funded with a $200 million investment from the state, Cozza said.

"There's a major shift in global logistics," he explained, adding that the enlargement of the Panama Canal has enabled a much larger class of cargo vessels, called neo-Panamax ships. These ships require upgrades at ports around the world.

Although the state's two ports are expected to be self-sustaining and receive no annual funding from the legislature, the state does underwrite special initiatives that keep the ports competitive, Cozza explained.

"We had the best year-over-year growth ever," said ILM director Julie Wilsey, citing the addition of a new airline -- United -- and three new nonstop destinations: Dallas/Fort Worth, Chicago and Washington National. The airport is also embarking on a $60 million terminal expansion project that will eventually result in 10 departure gates, three security check lines, additional concessions and improved baggage handling.

Asked if ILM plans to add more destinations this year, Wilsey replied that airport officials are currently focused on increasing passenger numbers to and from Chicago, Dallas-Fort Worth and Washington National, so that those carriers can operate profitably from Wilmington.

"These markets are not mature yet," she explained. "Our plans for nonstop destinations are to ensure that carriers are going somewhere with this. These must be sustainable services that will make money for the carrier."

Wilsey did mention that three other cities on her staff's top-10 list of future destinations are Boston, Denver and Newark. She also reported a reduction in "leakage" to Raleigh-Durham International Airport -- local passengers who bypass ILM for the offerings at RDU. Last year, she said, leakage fell from 29 percent to 21 percent; efforts are ongoing to reduce that percentage even further.

He also pointed to a lesson from Hurricane Florence: the need to deploy WAVE buses to provide transportation for those evacuating during natural disasters.

Both Karen Collette, division engineer for NCDOT in Wilmington, and Mike Kozlosky, executive director of Wilmington Urban Area Metropolitan Planning Organization, confirmed progress in planning for Cape Fear Crossing. Both officials said that the preferred location for the new bridge will likely be selected this summer. Kozlosky added that a new environmental impact study will be ready in the next several weeks.

Some of the questions looked at small-scale transportation improvements. Kozlosky was asked if the city of Wilmington plans to bring a bike-sharing program to town.

"Yes, we're in discussions with bike sharing company Zagster," he replied, saying that a program launch will take place later this year. Zagster, based in Boston, seemed to be best suited for Wilmington, he added.

Ride-sharing also received its share of attention during the discussion. Panelists talked about the potential impact of services from companies like Lyft and Uber, as well as the growing use of autonomous vehicles and even drones to provide transportation alternatives. The consensus was that while these alternatives are making waves in other cities, there has not been much effect in this market. Airports in other cities have noticed a drop in demand for parking; ILM has not, Wilsey said.

"We grew 12 percent in passengers last year, and our parking demand grew an equal amount," she said. "In summer, we see a 5 percent increase in demand. We are looking at our parking inventory."

In their final remarks, all five panel members stressed the importance of electing public officials who will advocate in the legislature for the area's transportation needs. They also encouraged the event attendees to be vocal in expressing their concerns and support for keeping transportation adequate in this rapidly developing region.

"We will be seeing lots of construction cones everywhere, so please be patient," Kozlosky said. "There will be a transformation [in local transportation] over the next 10 years."