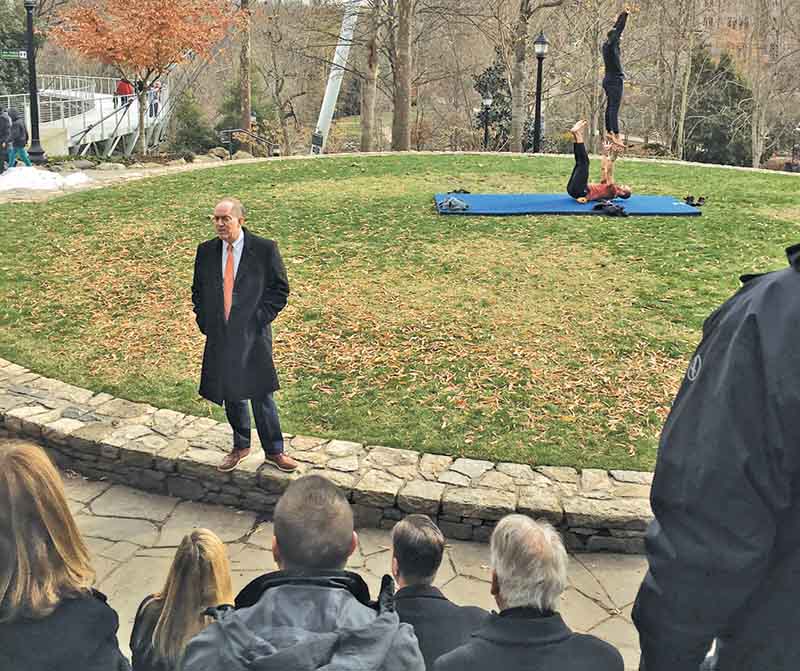 Knox White, the mayor of Greenville, South Carolina, addresses Wilmington and New Hanover County officials at Falls Park in Greenville, as performers from the touring show Hamilton take advantage of the park’s green space. (Photo by Neil Cotiaux)
GREENVILLE, S.C. – During the Wilmington chamber’s recent InterCity Leadership Visit, Greenville Mayor Knox White explained how he and other leaders made a bold decision to use eminent domain, tear up a highway bridge and clear an overgrown river valley to create Falls Park, where a pedestrian suspension bridge is a national symbol of community revitalization.

“Most people in Greenville had never seen the waterfall,” White said Dec. 12 to the more than two dozen community leaders from Wilmington and New Hanover County.

The 26-acre park was completed in 2004 at a cost of $13 million and resulted in about $200 million in private investment within two years, the mayor told his visitors in an amphitheater near the park’s entrance.

Funding for the park came from a local hospitality tax permitted by state law in South Carolina.

While the project drew some protests more than a decade ago, opposition has given way to acclaim, White said. In Greenville, he said, the city’s successes continue to rest on sticking with a vision and engaging in continuous planning.

“Everything is intentional,” said White, who Time magazine named in 2018 as one of 31 people changing the South and whose agenda of intentional growth has been accomplished in a bipartisan manner.

THE VALUE OF VISITS

Organized by Wilmington Chamber of Commerce CEO Natalie English and her staff, the two-day stay in Greenville marked the third visit in a series aimed at introducing business and governmental leaders to “innovative ideas, programs and initiatives which may be adapted and implemented in our community,” according to the chamber.

A tandem goal is to build relationships among delegation members.

Previous visits were made to Charleston, South Carolina, in 2015 and Richmond, Virginia, in 2016.

With a 2017 population of 68,000, Greenville is smaller than Wilmington (117,000) and the cities’ funding bases and natural assets differ. But the cities both share praise – “America’s Best Riverfront” (Wilmington), “Great American Main Street Award” (Greenville) – and concerns.

Like Wilmington, Greenville has in recent years attracted an increasing number of hotels and mixed-use projects to its downtown, and an abiding interest in mixed-use is what the two cities clearly share.

“That is the magic,” White said.

Greenville’s decades-long devotion to placemaking includes Falls Park; retail recruitment and 125 restaurants; tree-canopied streetscapes including signs pointing foot traffic to less-visible businesses; free two hour parking in the central business district; 12 city-owned and operated garages; 3,200 units of downtown multifamily housing in place or in development; 2,200 hotel rooms available or in the pipeline; and a series of public-private partnerships such as Main Street’s Project ONE, a draw for both businesses and tourists.

“They have this very long-term planning … to make these grand, sweeping plans,” observed Wilmington Mayor Pro-Tem Margaret Haynes. “Long-term is the key instead of working incrementally.”

“I think we’re starting to move in the right direction,” Lamm added, citing Wilmington’s River Place project on Water Street, a public-private partnership that will create new housing, retail and parking. “It’s going to be a game-changer for downtown.”

Kim Hufham, president and CEO of the Wilmington and Beaches Convention and Visitors Bureau, suggested that the success of Falls Park in Greenville has implications for the future impact of Wilmington’s North Waterfront Park.

“People are going to come where there is activity” even on a cold day, she said, referencing the dog-walkers, bridge-crossers and two gymnastic members of the touring company of Hamilton who were at Falls Park while the mayor was speaking. As planning for North Waterfront Park continues, Hufham said, taking an even closer look at how the park can be utilized can make it “a really top attraction.”

Yet all cities face challenges.

In Greenville, the cost of downtown placemaking is paid in part by visitors who stay at one of its center-city hotels.

“It is not uncommon to pay $300 a night now,” said Mary Douglas Hirsch, the city’s real estate development manager, who hopes a growing supply of rooms will bring rates down. “We want our downtown hotels to be sustainable.”

The need for affordable housing represents a more far-reaching concern.

Some residents pay as much as 50 percent of their salaries to live downtown. Workers such as firefighters and wait staff who can’t afford to live there continue to drive in because of public transit schedules. Downtown housing ranges from $1,400 to $2,400 per month.

Capping two years of study, the city launched a housing trust fund in 2018 and has embarked on a campaign to build more affordable housing in concert with private and nonprofit partners, including units bordering the 60-acre Unity Park planned for Greenville’s West End.

In addition, the city is examining how to recruit more class-A office tenants.

“We’re starting, I think, to get too heavy on residential and hotels,” said Matt Efird, interim assistant city manager.

As civic leaders in Wilmington and New Hanover County wrestle with issues related to growth, land use and costs, members of the delegation said they found their experience in Greenville to be helpful.

“It’s good to get that kind of validation when you see another community, and we’re following along that same pathway,” said Ed Wolverton, president and CEO of Wilmington Downtown Inc., who also acknowledged that with a larger population and competing demands for funding, resource allocation “may be a little bit more complex in Wilmington than it is here in Greenville.”

“They have other sources of revenue … they are able to have the hospitality tax,” observed Haynes. “I think we need to look at our structure of revenue.”

“My takeaway from the whole trip was the mayor’s speech when he talked about planning and being intentional,” the Rev. Clifford Barnett Sr. said.

“The idea of being able to network was great,” added Barnett, who just finished his first year on council. “You got a chance to see people in a different light … everyone’s got to work together.”