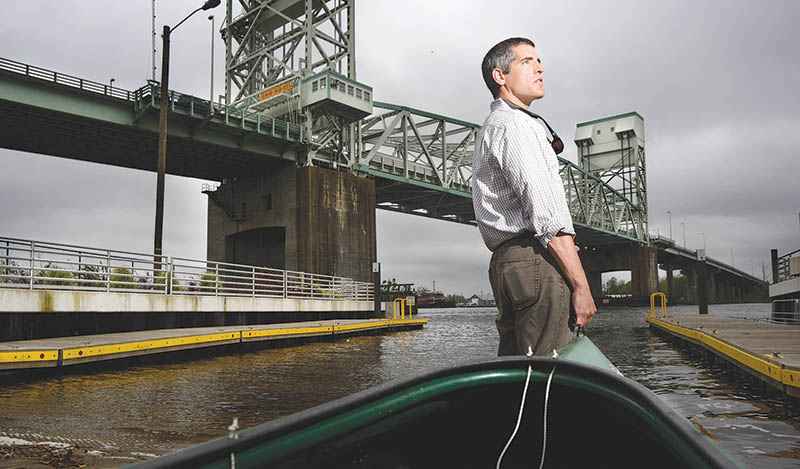 Riverkeeper Kemp Burdette (above), is leader of Cape Fear River Watch, which is among the groups named in a proposed consent order against Chemours requiring the company to perform GenX clean-up efforts.
GenX remained a widely-discussed topic in 2018, which is ending with the first proposed settlement in a legal case against the company tied to the chemical found in the Cape Fear River.

In late-November the N.C. Department of Environmental Quality announced that the Southern Environmental Law Center, on behalf of Cape Fear River Watch and the state agency, signed a proposed consent order with The Chemours Co., that requires the Fortune 500 company to address environmental concerns raised by the presence of per- and poly-fluoroalkyl (PFAS) substances in the river.

PFAS, a class of chemicals that includes GenX, continued to be studied by universities researchers this year as well as by the EPA. Several regional reports were released through public discussions this year in Wilmington.

Wilmington, Delaware-based Chemours operates out of the 2,150-acre Fayetteville Works site in Bladen County near the Cape Fear River and was pegged in mid-2017 as the source of GenX found in the drinking water of Wilmington-area residents.

In May, the company announced plans to make a $100 million investment into that facility in a long-term plan to reduce GenX and other compounds.

The company would be required to make improvements with the proposed consent order, which is up for a public comment period ending on Dec. 21. It’s the first potential resolution among various legal actions taking place against Chemours in state and federal court.

The proposed order requires the company to reduce GenX emissions by 92 percent by the end of the year, fund of health studies and pay a civil penalty of $12 million, as well as $1 million for investigative costs, among other measures.

Other pending lawsuits, however, remain. A proposed class-action lawsuit against Chemours filed in federal court continued to be pursued this year, as well as lawsuits filed by regional water utilities, among them, the Cape Fear Public Utility Authority, which criticized the consent order as not doing enough.

CFPUA officials said that the recent consent order with the company and signed by Southern Environmental Law Center “fails to provide a solution for the citizens of New Hanover County ...”

In its own remedies, CFPUA made headway on short- and long-term water treatment options to reduce levels of PFAS at the Sweeney Water Treatment Plant. That included approval of the design of a permanent filters upgrade to the treatment plant. Brunswick County also approved construction of a $99 million low-pressure reverse osmosis plant earlier this year.