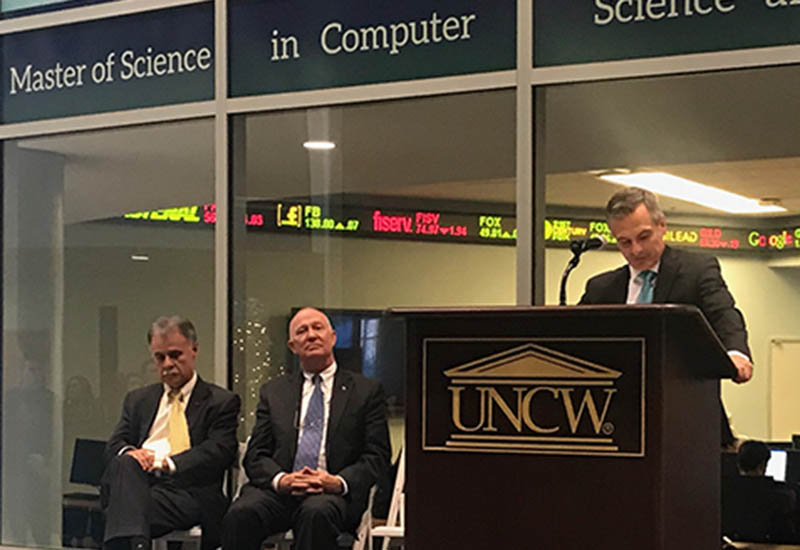 UNCW Cameron School of Business Dean Robert Burrus (right) and Chancellor Jose Sartarelli announce a $10 million donation from alumni David Congdon (center) at an event Thursday afternoon. (Photo by Cece Nunn)
UNCW has received a commitment for the largest gift in the school’s history – $10 million from 1978 graduate David Congdon, executive chairman of the board of Old Dominion Freight Line, and his wife, Helen.

University of North Carolina Wilmington officials shared the news at a 2:30 p.m. event Thursday that Congdon and his wife attended, along with his father, Earl Congdon, and other family members. University officials said the gift will be used to establish the David S. Congdon School of Supply Chain, Business Analytics and Information Systems, supporting these programs within the Cameron School of Business.

David Congdon spoke during Thursday's announcement, saying he had always wanted to do something for his alma mater and was courted over the years by school officials before coming to the decision on the $10 million gift. His family has established roots here at Wrightsville Beach and Figure Eight Island, he said, and his daughter and son-in-law live in the Wilmington area.

He gave much of the credit for his ability to make the commitment to UNCW to Old Dominion Freight Line, a global trucking and shipping company, his wife and his father.

"It's the company's success that has translated to our family's success financially that's allowing us to make a gift of this magnitude," David Congdon said during his remarks at UNCW's Computer Information Systems building.

The building will be rededicated as David S. Congdon Hall, according to a news release.

Sartarelli said after the announcement Thursday that these tasks could not be accomplished without the gift.

“Generous and innovative philanthropic leaders like the Congdons help the university address the most pressing needs of the region, building workforce expertise and benefiting local industries,” Sartarelli said in the release. “We are confident that this commitment will serve as a catalyst to inspire other donors who want to transform the lives of students and help us engage faculty, alumni and the community to expand, explore, and address the issues important to our region.”

David Congdon graduated from UNCW in 1978 with a bachelor’s degree in business administration and was named the 2008 Cameron School of Business Alumnus of the Year, the release stated. He has spent his entire career, which began when he was a teenager and continued after graduation, with Old Dominion Freight Line Inc., according to the release, sharing his experiences at a talk at UNCW last September.

The firm was founded in Richmond, Virginia, in 1934 by David Congdon’s grandparents. Its headquarters was relocated to High Point in the early 1960s, and the Congdon family has resided there since then. His experience has included dockworker, truck driver, mechanic, industrial engineer and various executive positions leading up to his promotion to the role of president and COO from 1997 to 2015.

David Congdon was named CEO in 2008, stepping down earlier this year to become executive chairman of the company’s board.

The release stated that a key initiative of UNCW’s Strategic Plan is working to ensure that students are employed within six months after graduation. The gift will help enhance programs, better preparing students and helping to fill a growing void in the workforce, according to the release.

“The Congdons’ transformational investment will provide an opportunity to increase access to high-achieving students, recruit and retain world-class faculty, and invest in state-of-the-art technology,” Burrus said in the release. “This investment will help spark the careers of students who plan to work in industries that are rapidly growing and that pay high starting salaries.”

At the event Thursday, Burrus said students who graduate from the school named after Congdon "will enter fields that support starting salaries in excess of $50,000. Students in these high-growth fields will be in extremely high demand during the next decade and beyond. For example, the Education Advisory Board forecasts that the top emerging jobs in the United States for 2022 are in the fields of data analytics and information data specialists, and according to Glass Door, supply chain managers are among the top 20 in-demand positions that offer average salaries above $100,000."

The release stated that the Congdons’ commitment caps off a record-breaking year for the university in terms of student numbers. The university set all-time enrollment records, with total enrollment surpassing 16,700 and a 16 percent increase in graduate student enrollment.