A Ruff Day At The Office: Dogs On The Job 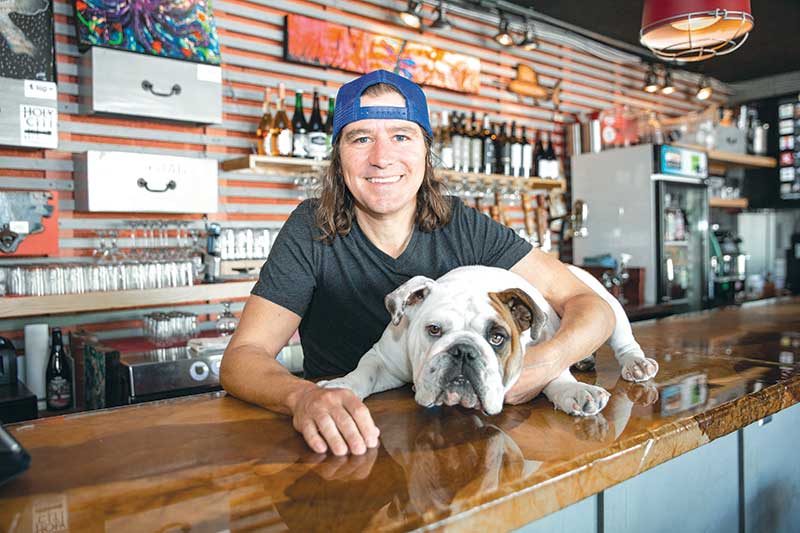 Stephen Henson, owner of The Brewer’s Kettle at 4718 Oleander Drive in Wilmington, brings his 9-month-old bulldog, Butterbean, to work. (photo by Chris Brehmer)
For generations, the routine has been the same. Dog owners return from work, or the kids get home from school, and the family dog greets them with a wag of the tail and a not-so-subtle request to go outside. Or worse, they discover that the pup could not hold it all day.

But, that age-old household ritual may be changing with recent workplace policies and practices. That’s because some of today’s employers are more open to employees bringing along their four-legged friends for a day at the office.

“Having the dog in the office reduces a little bit of stress and brings people together,” said Jennifer Manocchio, president of Sweeney, a public relations and marketing firm with an office in Wilmington. She brings her dog Tank to 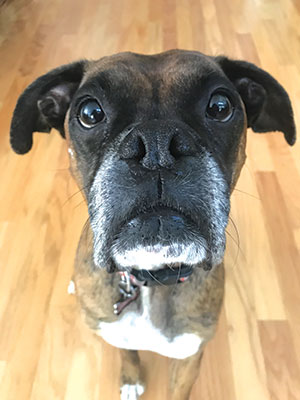 work a few times each week. “It also gives you a good excuse to head out of the office and take the dog on a quick walk throughout the day.”

A recently published report from Pet Sitters International (PSI), based on a survey of 1,000 pet owners, found that 78 percent of pet owners consider pet-friendly workplace policies an employee benefit. More than half of the survey’s respondents said that, other factors being equal, a pet-friendly policy would be a deciding factor between potential employers.

Pet-friendly policies also appeal to executives when considering where to set up shop. It was a deciding factor last year for Ty Downing, CEO of SIS Digital, when he chose to relocate the agency to 1608 Queen St., the building it shares with Coworx at the Cargo District. Downing’s beagle, Sadie, is a fixture in SIS’s modern, open-concept workspace that features a lounge area.

“We’re always keeping our eye on what happens in Silicon Valley,” said Downing. “We visited Googleplex a couple of years ago. They’re the gold standard as far as ethics, culture and the whole mindset, and it was refreshing to see that they actually allow dogs … We don’t want to be Google, but it does bring that feeling of culture that we want.

“From here forward, I will never be in a space that does not allow pets.”

Digital Analyst Colby Raker keeps scores of pictures of Sadie on her phone and says the four-legged office mate brings a sense of comfort.

“It gives you something to look forward to, watching Sadie prance in every morning,” said Raker. “A dog that’s well-behaved can just come in and chill, but she’s kind of spunky, too, and she always gets her way. It’s really nice to have an animal around.” 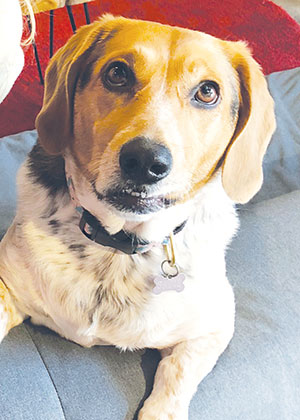 The idea of dogs contributing to the productivity and collaboration of employees has merit, research shows. According to a 2017 Central Michigan University study, dog-present work groups were found to have more verbal cohesion, physical intimacy and cooperation, than groups without a dog present.

“We will sit on the couch in our little lounge area, brainstorming or reviewing client work,” said Downing. “Then, Sadie jumps up on the couch and immediately, team members are petting her, giving her attention. I can definitely say that it adds to brain stimulation and productivity.”

In April, the Amazon blog Day One, which describes life at the company, posted that as many as 6,000 dogs join employees at its Seattle headquarters every day. The tradition began in the online retail behemoth’s infancy when a husband and wife team of Amazonians brought their Welsh corgi, Rufus, to work regularly.

Today, a building on Amazon’s campus is named for now-departed Rufus, and dogs can stop at nearly any reception desk at Amazon for a treat.

For Stephen Henson, owner of The Brewer’s Kettle on Oleander Drive in Wilmington, his bulldog, Butterbean, has become nothing short of a mascot for the 3-year-old bottle shop.

“If it’s an option, I’m always going to bring my dog, because dogs are family, but it really wasn’t an option in the past,” said Henson, who worked in the mortgage business before opening The Brewer’s Kettle. “That’s why this is so enjoyable. It scares me to even think about having to go back to a traditional workplace.”

At just 9 months old, Butterbean knows little else than spending many of his days alongside Henson at the shop.

“He loves it,” said Henson, as he followed Butterbean toward the woods at the back of the shop’s property. “Sometimes I have to follow him outside when I should be inside doing other things, but it is puppy playtime for him all day, every day.”

The Brewer’s Kettle will mark its three-year anniversary May 20 with Butterbean’s Beer, BBQ & Puppy Bikini Bash, a family- and pet-friendly event in its outdoor space. The event will double as a pet food drive for the Pender County Animal Shelter, and will feature a fashion-show runway for pups to model their best summer duds. June 22 will mark the 20th Take Your Dog to Work Day, a national event started by PSI in 1999.