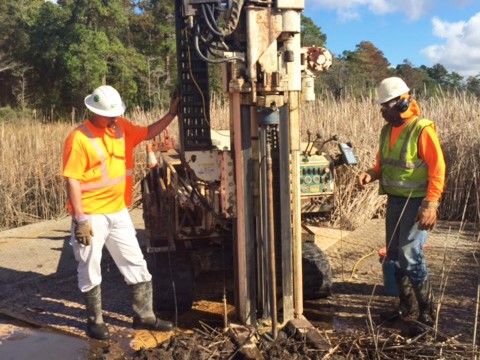 Contractors for the Multistate Trust used sampling equipment to identify creosote contaminants near the Brunswick River. (Photo from Multistate Trust)
Discussions about remediation and potential redevelopment of the Navassa Superfund site will be the topic of an upcoming public meeting with federal and state environmental officials.

An environmental investigation of the site, also called the Kerr-McGee Chemical Corp. site, is ongoing, according to EPA officials. The property was a creosote-based wood treating facility from 1936 until 1974.

These days, the 245-acre site holds the potential for remediation and redevelopment into a property that could add tax base and possibly jobs to the small Brunswick County town of Navassa, which has a population of about 1,800.

The EPA, along with representatives of the N.C. Department of Environmental Quality (NCDEQ) and Multistate Environmental Response Trust (Multistate Trust), will be on hand for a public meeting April 10 on what the future could hold for the site, according to an EPA news release.

The Multistate Trust acquired part of the property in a bankruptcy settlement with Tronox, a spinoff of Kerr-McGee, that filed for bankruptcy in 2009.

Multistate Trust took ownership of the Navassa site and 400 other contaminated properties in the nation, under a court-approved agreement between the federal government, 22 states and Tronox, according to the organization.

Multistate Trust is working with its EPA and NCDEQ beneficiaries on site investigation, remediation and redevelopment planning. Those topics, as well as an upcoming feasibility study of possible remediation options at the site, will be the focus of the meeting.

The last meeting held for the Navassa site was in February, when residents and local officials worked to identify possible redevelopment options for the site, in which the Multistate Trust owns nearly 153 upland acres, including the former wood treating facility, and the state owns 92 acres of marsh.

A market analysis presentation updated in February concluded that potential redevelopment opportunities could include residential, commercial, mixed-use, industrial and recreational use.

Residents will have the chance to speak with experts about the site at a public availability session from 3:30 to 5:30 p.m. on April 10 at the Navassa Community Center, 338 Main St. That will be followed by a public meeting when officials will present current updates on the site from 6-8 p.m.

Creosote has been used since the mid-1800s as a wood preservative and is derived from the distillation of tar from wood or coal, according to the EPA. The wood products commonly treated with the chemical are used in railroad ties and utility poles.

Kerr-McGee dismantled the wood treatment buildings and facilities at the 245-acre site by the 1980s. Later designated a Superfund, or hazardous waste site, the land is bordered by Navassa Road, Sturgeon Creek, the Brunswick River and Quality Drive, according to the EPA.

The soil, sediment and groundwater are contaminated by creosote-related chemicals, EPA officials said in the release, adding that the site does not currently threaten people living and working near the site.