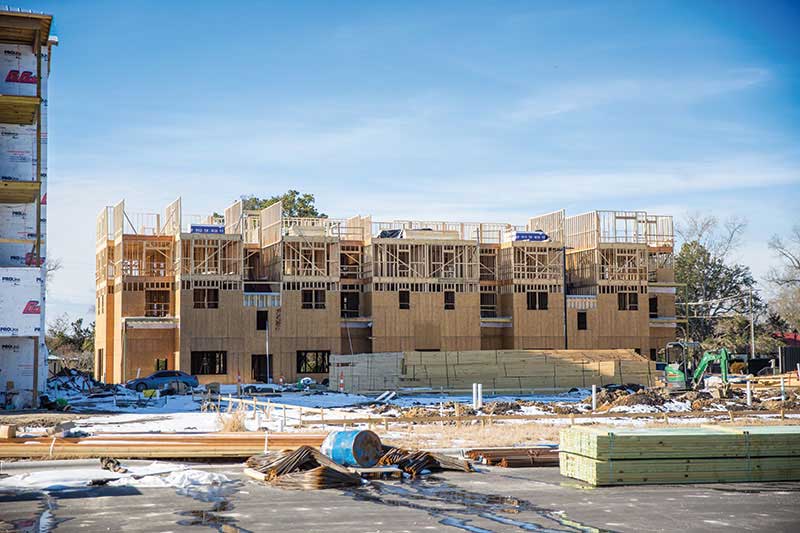 Harrington Village, a major mixed-use project for the rapidly growing town of Leland, is under construction on Village Road. (photo by Chris Brehmer)
About 10 years ago, a real estate broker sold about $50 million worth of lots in one weekend at Ocean Isle Palms, a neighborhood that wouldn’t be built. Not for at least another decade.

“It shows the insanity that we had back then,” said Jim Garrigus, vice president of Atlanta-based St. Bourke Development.

St. Bourke is a subsidiary of Drapac Capital Partners, a company that in 2013 bought five so-called “zombie subdivisions” in Brunswick County, including the 950-acre Ocean Isle Palms.

While the developers have plans for reviving all of the neighborhoods, they’re moving forward the most quickly on Ocean Isle Palms, which will have a different name in the future, Garrigus said.

More than 15 years ago, experts predicted that explosive growth would come sooner rather than later to Brunswick County. Although the Great Recession put the brakes on some of those expectations a decade ago, the county never stopped growing, points out Brunswick County planning director Kirstie Dixon.

It remains one of the fastest growing counties in the United States, with its metro area coming in second only to The Villages, Florida, in Census numbers released in March last year.

Referring to 20-year estimates for the county’s population growth, Dixon said, “We have to accommodate those 65,000 projected people.”

If even half of that prediction comes true, “it would be significant,” she said.

Within a fast-growing county is the quickly expanding town of Leland, where one project from homebuilder D. Logan, president of Logan Homes, is setting the tone for an identifiable downtown area, Logan said.

On growth in general in Brunswick, Logan said, “It’s pretty simple: Wilmington is out of land. The only thing left really is off of River Road, and that’s being developed and what little bit the Camerons have left in midtown Wilmington. What you’ve got is west in Brunswick and north in Hampstead.”

While numerous residential and commercial projects take shape in the Leland and elsewhere in Brunswick County, some of the issues related to neighborhoods that developers abandoned will still take years to resolve, Dixon said.

As a result of past problems, Brunswick County no longer allows improvement guarantees and conducted major rewrites of the county’s development rules in 2007 and 2014.

“We’re really up to date,” said Dixon, who was named planning director late last year, but has been working in planning and permitting for the county since 2004. “We kind of took a whole different approach. We’re really encouraging exceptional design features that make it easier to live, improve the quality of life.”

Brunswick County has approved a master plan for a majority of the Ocean Isle Palms property (about 125 acres is under the jurisdiction of the town of Ocean Isle Beach) for homes, up to 2,800, and commercial space.

Only a handful of homes were previously built there, along with an entrance structure that will be demolished and an amenity building that might also be torn down to make way for a modern structure.

“I think Brunswick County and that general larger area of the coast will always be attractive to retirees coming out of the North – New Jersey, Pennsylvania, places like that,” Garrigus said. “So we will find our primary and initial market being retirees or a lot of people that will buy ahead of retirement . . . but our goal is to really reach a broader market, and that may take a while.

“As it gets its own identity, it becomes almost a destination in and of itself, and so we hope to attract a lot younger market as well – kids running around, stuff like that.”

Although approved for 2,800, the total number of homes built on the Ocean Isle Palms property over 10 years will likely work out to be less than that, Garrigus said. Commercial space is also part of the plan.

“It’ll have a significant sector of potentially retail,” he said. “We will start out with a small [commercial area] – we call it a village that will have cafes, kind of no national brands whatsoever, very local. It’ll be both an amenity to the project but also open to the public. That will be almost the first thing we build, and that will be done in phases itself.”

While the Daprac properties will likely mainly focus on single-family homes, some say apartments are the housing product already attracting younger people to the county.

“A lot of what millennials want is that urban lifestyle where you can walk to get a cup of coffee and walk to work and walk everywhere you go,” Logan said. “We just started leasing [at the Harrington Village apartment in Leland] two weeks ago, and 50 percent of our leases are millennials moving from Wilmington. I’m so happy about that because I had hoped that that would be the case.”

As Leland continues to come into its own, other parts of Brunswick County will continue to see changes in the coming years brought about by growth, including commercial and residential development.

The new incarnation of Ocean Isle Palms will be in the planning and design phase during 2018, Garrigus said.

The developers are bringing in a national consultant on natural resources to figure out how best to incorporate and preserve the natural aspects of the property, he said. They could break ground on the revived project as early as the first part of 2019.

Their other projects are San Rio in Shallotte, Sea Wynde near Shallotte, Goose Marsh in Bolivia and Eagle Creek, next door to Brunswick Community College. For Eagle Creek, “I’ve met with the president and their staff [at BCC]. We will really tie into the college for housing. We’ll do a little village there to support their students,” Garrigus said.

It could also provide housing for nearby Novant Health Brunswick Medical Center or those who need access to the county complex in Bolivia.

Meanwhile, Goose Marsh is close to Eagle Creek, with the Lockwood Folly River running through it.

“We’ll really reorient that whole thing toward the river,” Garrigus said of his firm’s plans for the Goose Marsh property.

But their first focus is the Ocean Isle Palms property, and the county’s zoning that allows for mixed-use and planned development, Garrigus said, has allowed the project to be developed “phase by phase, year by year to react to the market.”


Check out our other business issues going on in Brunswick County in our Region in Focus special section: