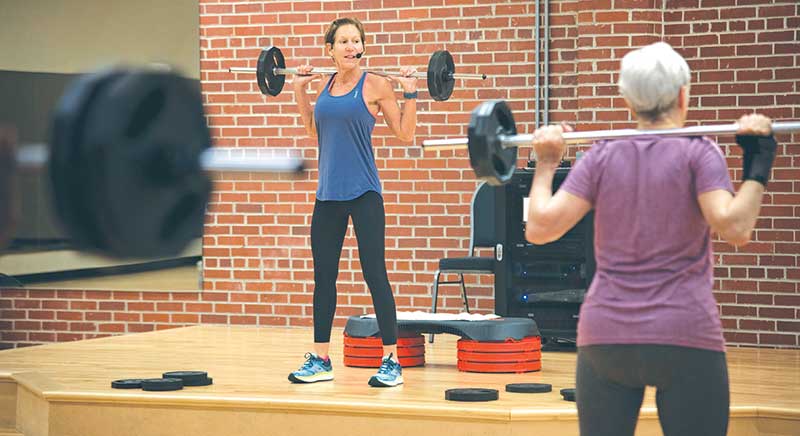 “The strength of our facilities has always been in our group fitness programs and personal training,” said Mike Valentino, owner of the newly rebranded TruFit gyms in North Carolina. “When people work out together or with a trainer, it always keeps them more consistently on their plan.”

Valentino, a former Gold’s Gym franchisee, last year sold off three of his local locations to Raleigh-based O2 Fitness. (His seven other locations, including one in Shallotte, switched brands from Gold’s Gym to TruFit.) Other recent consolidations in the fitness center market came when the Wilmington Athletic Club’s thousand-plus members looked for other places to hit the treadmill when the South 17th Street facility sold its land to nearby New Hanover Regional Medical Center to make way for more hospital parking.

And at other fitness facilities, membership expansion stems from the area’s growing population.

At the Dinah Gore Fitness and Aquatics Center of Brunswick Community College (DGFAC), dramatic increases in the county’s senior population and increasing interest in swim teams have impacted the program schedule since their opening nine years ago. More than half of its 2,300 members are ages 55 and up, said facility manager Ashley Brown. Silver Sneakers has proven to be so popular that additional water and land classes were added in 2017. Of the approximately 40 group classes per week, 15 are Silver Sneakers.

Likewise, O2 offers more than 50 group fitness classes each week, some of which are Silver Sneakers.

Limited availability of year-round swimming pools and the increasing interest in group and competitive swimming have sent New Hanover County residents south to use the DGFAC pool, especially for triathlon training, Brown said. It’s already home base for the swim teams of West Brunswick and South Brunswick high schools as well as a private swim league.

Valentino noted that convenience and variety are also key. Convenience resonates through the number of facilities, both large and small, located around Wilmington.

Since taking over the former Gold’s Gym locations in Wilmington on Nov. 1, O2 now has five facilities for its estimated 21,000 members. Planet Fitness has two large locations on opposite ends of the county. CrossFit locations dot the region.

DGFAC’s location at the center of the county allows it to draw people from across the wide expanse of Brunswick County. Brown noted she is seeing increasing numbers of people from the Oak Island/Southport area in addition to those already coming from the north and south.

And dozens of personal training, yoga and Pilates studios in the region offer clients a quick trip from home or work to their workout.

As Valentino rebrands his former Gold’s Gym facilities, that client desire for variety in classes and in equipment offerings is front of mind.

“We are adding even more equipment that is aligned with our brand TruFit, equipment that provides differentiation (variety) for programming and keeping members motivated,” he wrote in an email. “Workouts can change up and also be highly effective and results driven.”

In a fun look at possible trends for 2018, Brit + Co blogger Ashley Macey scoured the internet for possibilities. Her compilation of predictions includes the strong comeback of boxing; exercising with pets (such as goat yoga at Tidal Creek Co-op) and family members; increasing use of FitBit and other technology in workouts and the introduction of more sophisticated apps; a return to playfulness and games rather than pushups and squats; personalized fitness programs based on individual’s DNA; and livestreaming group classes that provide the convenience of home and the social atmosphere of a team.

The American College of Sports Medicine takes trends seriously. In its 12th annual survey, published in the Health & Fitness Journal’s November/December 2017 issue, writer Walter Thompson described the movement of the top 20 trends through the past several years. Some of the top trends sound familiar:
• High-intensity interval training, which incorporates short bursts of high intensity with short periods of rest;
• group training using varying techniques and equipment. Group training first made the top 20 in 2017; and
• wearable technology including activity trackers.

Brown says her members are “very much about trends. They watch You- Tube and TV and they love the latest and greatest things that are out.”

As a result, they offer yoga, Zumba, strength and cardio.

“We have targeted our group exercise schedule to hit every trend that’s out today. We try to stay on top and get feedback,” Brown said.

That includes class times, music and more. The center recently was licensed to offer Strong by Zumba because its members were asking for it.

Unlike traditional Zumba classes in which dancing is integral, Strong uses body weight including pushups and squats.

The strongest trend, Brown said, is in participation.

“People love that group atmosphere,” she said. “We try to make it fun.”