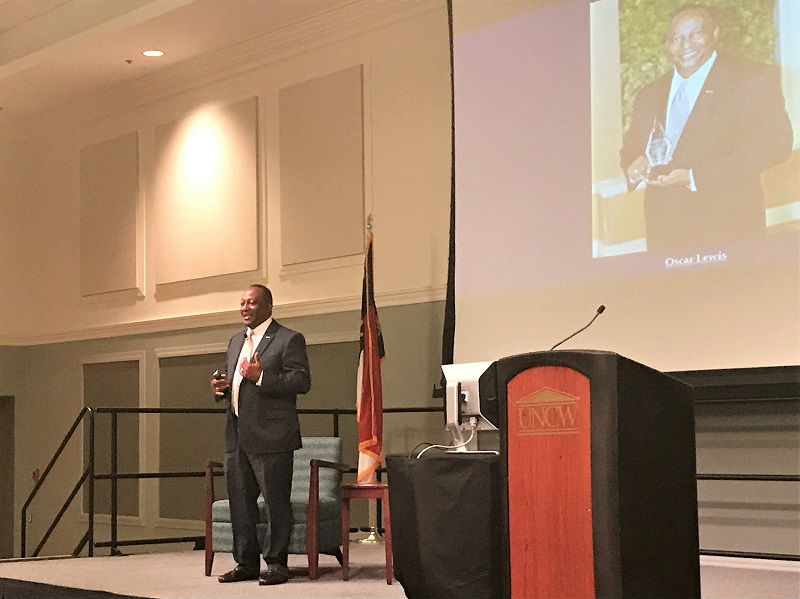 Cape Fear Region MED Week recognizes the outstanding achievements of minority entrepreneurs and honors individuals and organizations that support minority business development, according to the university. This year’s theme of the conference was “Managing the Challenge of Change.”

This year, more than 80 people registered for the event, part of a nationwide observance of MED Week, conference officials said.

The local event, now in its third year, featured keynote speaker Oscar Lewis, president of The Lewis Company who lives in Cary.

Lewis’ patent for the Smart Airport Landing System is in the testing phase with the Federal Aviation Administration. The Lewis Company’s clients include the federal government, pharmaceutical companies, local government agencies and energy companies, officials said.

"I'm an innovator. I like to create stuff. I like to engineer design, to build stuff. So I came up with this new runway design, and I have been very fortunate bless that the FAA and my company came up with an agreement to build it together," Lewis said during his speech Thursday.

Lewis said his company is working in Atlantic City today and for the next four or five years. The company aims to increase capacity and economic productivity at airports.

During his speech, Lewis shared that he grew up in rural Alabama but was fascinated by those in the aeronautical industry. Though at a young age, he didn't know how to get involved.

Frequent trips to his local airport to watch planes on the runway landed him a flight with a pilot, a trip that sparked his career.

"That was over 35 years ago," he said, adding that soon after that event, he got his pilot's license at the age of 19 and has since continued in the field.

Following his background introduction, Lewis addressed changes in the business arena that local business owners should keep in mind today.

He said business owners should prepare for changes in technology, robotics and artificial intelligence now to stay in business for years to come.

With the fast pace of technological changes across industries worldwide, something that Lewis said he has seen happen overnight, comes challenges for small businesses.

"The Fortune 500 companies are investing in artificial intelligence and robotics, and all of these gadgets and tools to do business without people. So how are you going to handle your company going forward when the trend is to eliminate people but still be productive?" he asked. "That's a trend today, so what are we going to do about it? We've got to study it, we've got to position our companies going forward. I'm talking today, I'm talking 20 years from now."

Focusing on technology and the role an owner's business can play will lead to success in the Wilmington area, he said.

"You've got energy. You've got everything in Wilmington right here. You have all the things to foster this type of economic growth," he said.

Another challenge Lewis highlighted for businesses is keeping up with cybersecurity and regulations.

"Regulations is one area that I have always paid attention to because I came out of air traffic control, and I'm still engaged in aviation," he said. "Regulations for clean air, clean water, noise -- all these things play a role in your business. So if you engage in any type of environmental services, these are opportunities here that you could really work on.

"We have rivers here ... Up and down that river there are many environmental concerns, so these are areas that you could become engaged in as a small business."

In the workforce, Lewis advised businesses to continue to develop their skilled labor sources.

"There is a shortage of skilled people. I see it every day in my industry. We have a demand for qualified technical people to build airports, to fly planes, to control air traffic, and it's hard to get them. It's hard to keep people in the pipeline. Because that pipeline is about a six-year pipeline," Lewis said.

He said he has trained some 300 air traffic controllers in his life, an area of business he thinks about every day.

"We're changing the industry. We're just getting started. And as a business owner, every day, get started," Lewis told the crowd.

Lewis is extending his Wilmington visit on Friday as part of the Cape Fear Region MED. He will be at the Cameron School of Business on Friday morning to speak to about 100 ninth- and 10th-grade students from Isaac Bear Early College High School for a group mentoring event, officials with the university said.