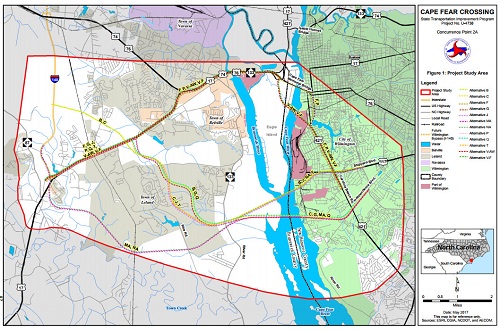 Project planners are considering dropping alternatives on the list of routes for the Cape Fear Crossing. (NCDOT reference map dated May 2017, courtesy of WMPO)
Nearly half of the 12 alternative routes under consideration for the Cape Fear Crossing project are being eyed for elimination, including two routes that would take infrastructure into Wilmington’s historic district.

The N.C. Department of Transportation is studying 12 options for the project, which according to officials with the NCDOT seeks to improve, upgrade or create new roadways, improve traffic flow between New Hanover and Brunswick counties and enhance freight movements to and from the Port of Wilmington.

The project, dubbed the Cape Fear Crossing, has 12 alternatives including two alternatives that look at upgrading the existing U.S. 17, four alternatives that focus on a new location and six “hybrid” locations that would require upgrades and a new bridge location.

Jay McInnis, project engineer for the NCDOT, said officials have given the nod to knock three alternatives from the list, although a “formal concurrence” or official on-record agreement has yet to be established, McInnis said. The three options McInnis referred to are routes J, VF and C from NCDOT’s study.

Reasons for dropping the three alternatives include a greater impact to homes and businesses in Brunswick and New Hanover counties, as well as wetlands and streams, than some of the other alternatives under consideration in the NCDOT study, McInnis said.

Two alternatives that would go into downtown Wilmington's historic district -- routes F and P in the NCDOT study -- are also being considered for elimination, along with some discussion of two other alternatives that take routes south of Eagle Island and over a new bridge crossing to Independence Boulevard.

The Merger Team, which is a project team made up of state and federal officials, is continuing to discuss dropping route alternatives F and P from the list, according to the Wilmington Metropolitan Planning Organization's Aug. 30 agenda.

“Alternative F would affect the second most homes and business of any of the alternatives and a lot of the properties affected would be in the historic district,” McInnis said of the reason for discussions about dropping the route.

The WMPO is set to discuss this item at its Aug. 30 board meeting. Mike Kozlosky, executive director of the WMPO, is also slated to update the board on items discussed at the Merger Team’s Aug. 17 meeting.

In late May, the WMPO adopted a resolution that supports two alternative routes that take the bridge south, near the Port of Wilmington.