Trading With The World Is Conference Focus 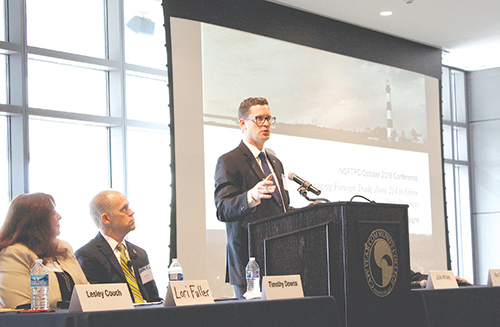 Sebastian Montagne, strategic planner with the N.C. Department of Transportation and administrator of the new FTZ #214, speaks a recent conference in Wilmington about foreign trade. (Photo by Vince Winkel)
Wilmington has positioned itself to play a critical role in increasing the region’s global trade with the rest of the world.

That was the sentiment at a recent foreign trade conference in the Port City on Oct. 12 organized by the Foreign Trade Promotion Council (FTPC).

“There are new opportunities for all of us,” said John Hayes, executive director of the FTPC.

Hayes pointed to several factors, including the increased capabilities at the port, the growing business park at the airport, new intermodal rail service between the Port of Wilmington and CSX’s intermodal terminal in Charlotte and last, but certainly not least, the recent approval of Foreign Trade Zone #214.

“The new foreign trade zone will be an incredible foreign trade tool for North Carolina,” said David Robinson, an international trade attorney based in Raleigh and an honorary consul to Japan.

“There are many reasons foreign businesses are looking to North Carolina to sell, distribute and in some cases manufacture their products here. And there are an equal number of compelling reasons why North Carolina companies should be constantly scouring the globe for business opportunities. The more we spread the word about this customs management tool, the bigger this economic driver will become for both the region and for the state as a whole,” Robinson said.

“Foreign trade creates both jobs and wealth, and more trade creates more jobs and results in greater wealth creation. And the sheer size of the FTZ [Foreign Trade Zone] alone sends a message to the world that North Carolina is and intends to become an even greater force in the global economy.”

The FTPC and the N.C. DOT Foreign Trade Department had worked for several years with the U.S. Department of Commerce to grow international business for the eastern reaches of the state, through an expanded and more ﬂexible FTZ.

With FTZ 214 now in place, those numbers are expected to grow. The FTZ program allows U.S.- based companies to defer, reduce or even eliminate customs duties on products admitted to the zone, providing benefits to businesses and industries. Some of the benefits include duty deferral, duty elimination, federal and state tax savings and reduced paperwork.

In addition both the Port of Wilmington and Wilmington International Airport are magnet sites, where new companies can quickly take advantage of the FTZ’s benefits through a pre-approved, third-party operated logistical structure.

“The three-year process to create Foreign Trade Zone 214 has been well worth the effort,” said Mitch Lamm, chairman of the Wilmington Chamber of Commerce board. “FTZ 214 effectively allows a business to create a trade zone around their location, rather than needing to be physically located in a predetermined area of land. This ability to import and export duty free without having to relocate or create a new office space should help attract new business to the region and opens another avenue for existing businesses to expand their markets.”

“FTZs are growing in importance as the global economy changes,” added Scott Satterfield, CEO of Wilmington Business Development. “Cost savings resulting from FTZs, along with our labor force productivity and strong infrastructure, make manufacturing and assembly operations here competitive at a worldwide level. Add to that the rise of advanced industrial technologies, and I believe FTZs fit neatly into the reshoring movement. Manufacturing may never be as job-rich as it once was, but the jobs being created in the sector require more skills and offer better pay.”

“FTZ 214 can be a catalyst that leads to a rebirth of business opportunity here in southeastern North Carolina,” the secretary said in her remarks to the audience. “In the past, many small- and medium-sized businesses found it too difficult to navigate international trade. We have all heard those painful stories. “We need to keep in mind that greater global trade requires greater global understanding and diplomacy. We cannot expect great results in one part of that equation, without similar results in the other parts of it,” Marshall added.

On the water, there are great expectations for those great results.

“We announced just last week that Maersk has started Asia service back into Wilmington again, so we’re very happy about that,” said Paul Cozza, executive director of the N.C. State Ports Authority, at the FTPC conference. “We think we are positioned very well to bring in additional services. Our ability to bring in these larger ships has changed our competitive profile dramatically. We can handle large vessels.”