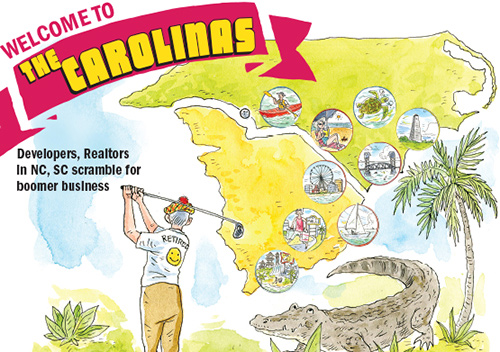 With an estimated 10,000 baby boomers retiring each day, the Coastal Carolinas represent an attractive destination for Northerners tired of high taxes and low temperatures.

Both Brunswick County and Myrtle Beach are poised to welcome plenty more boomers due to the region’s pleasing climate, reasonable cost of living and improved housing market, with developers and Realtors inviting prospective retirees to come on down, look around and buy into the market.

While the cost of living for retirees in Myrtle Beach stood at 3.5 percent below the national average according to a recent analysis by Kiplinger, an analysis by Forbes places cost of living in both Brunswick County and Myrtle at 1.7 percent above average, still appreciably better than in the North.

And increasingly, Realtors on both sides of the border believe that post-2008 residential valuations will remain strong.

“Our values dropped about 35 percent … we have regained 30 percent of the dropped values,” said Laura Crowther, CEO of the Coastal Carolinas Association of Realtors in Myrtle Beach.

“We are about 80 percent back,” said Jim Goodman, vice president-sales with Margaret Rudd and Associates and president of the Brunswick County Association of Realtors.

In the Myrtle Beach area, the average price of a single-family home in July stood at $256,604.

With conditions favorable for a move, aging boomers have become discerning shoppers, looking for just the right mix of price point and recreational, social and medical amenities.

At Compass Pointe, the 2,200-acre gated golfing community off U.S. 74 in Brunswick County, the 18-hole course is almost an appendage to the 10 miles of biking and nature trails, 7,000-square-foot fitness center, swimming pool, amphitheater and clubhouse that nudge out-of-staters to think seriously about settling in. Village shops, possibly including a drugstore, hair salon and grocery store, are under development. About 600 families have moved in, with room for 1,400 more.

As for the golf course that opened in June – the first full course to open in North Carolina since 2008 – it’s somewhat of an add-on.

“Golf any more is not a dominant factor,” said Bobby Harrelson, the community’s 79-year-old developer, with only one-quarter of retirees now playing the sport.

“Golfing is not a profitable operation, [but] it makes for what I consider a complete community,” he added. “The course was not built as a profit center per se.”

Indeed, Compass Pointe may be the last golfing community to be built in Brunswick County for some time. With icons like Arnold Palmer and Tiger Woods no longer commanding attention, a net reduction of 148 U.S. courses in 2015 and a lack of interest by millennials, “a slow leak in overall participation persists,” according to the National Golf Foundation. 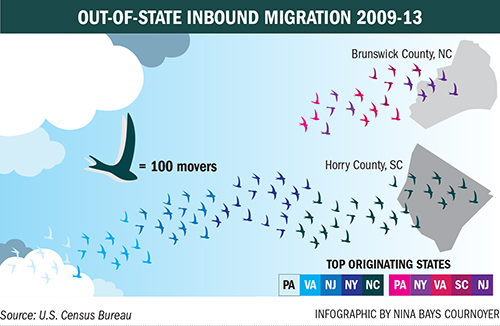 Regionally, as many as 10 courses could close within the next 18 months in the combined Myrtle Beach-Brunswick County area, industry sources said, “so I would say we have seen a peak in the number of golf courses and/or golf course communities,” stated Doug Terhune, president of Carolina Plantations Real Estate in Shallotte.

But, with more than 100 public, semi-private and members-only courses in Myrtle Beach’s Grand Strand and just 35 in Brunswick County, any winnowing process in the county should be minor, Terhune suggested.

“We will see some brave developers build golf communities because we still have half the boomer generation to retire, but they should be few in number,” added Larry Gavrich, founder of golfcommunityreviews.com, who helps out-of-staters find getaways in the Carolinas.

Whether interested in golf or not, retirees looking to depart from the cold utilize a number of tools as they search for their dream home including the internet, word-of-mouth and resort and retirement expos.

Since 1989, Michael Hackeling, president of Ideal Living, has worked with about 300 developers, builders and brokers across the South to help them stage such gatherings.

At his office on Racine Drive in Wilmington, Hackeling, a lawyer from Long Island, maintains a database of 225,000 prospects who can be invited to one of about a dozen expos annually in Metro New York, Chicago, Washington and other cities where high taxes and inclement weather may have seniors itching to depart. The expos can draw 2,000 attendees on a weekend and involve about 75 exhibitors.

“They come out there in the clear dead of winter when you want to get out of New Jersey badly,” recalled Goodman, who attended an expo there and ultimately moved to Brunswick County in 2002 after looking hard at Florida. “This is more of the laid-back lifestyle that I envisioned,” he said.

Such “sense of place” may be hard to handicap, but it often ends up being a key factor when relocating.

Linda Humphreys moved around a bit before she and her husband chose St. James Plantation.

“I actually did not like Florida, partly because of the weather,” Humphreys said, but she fell in love with Southport. “It reminds us of a New England fishing town,” the former New Hampshire resident explained.

While Humphreys had spent time in the Cherry Grove section of North Myrtle Beach while growing up, she had no interest in returning. “It was absolutely crazy nuts,” she said as she walked out of St. James’ community center. “We checked that off our list right away … the pace here is quiet and gentle.”

While that could change a bit as a result of the large concentration of building permits taken out along N.C. 211, such growth will bring with it a variety of amenities.

Already, Goodman foresees a major shopping mall, and a 26,000-square-foot wellness center opens next to St. James Plantation in September.

In Myrtle Beach, where the city’s comprehensive plan projects the population of those 65 and older to increase by up to 115 percent by 2025, medium-density single-family housing is growing rapidly, and planners are placing more emphasis on mixed-use projects.

At one, The Market Common, a unique approach has emerged.

Opened in 2008, the 111-acre district melds big box retailers, restaurants, local boutique stores and a cinema with broad, palm-lined avenues and a large lake surrounded by a walk-bike trail and event space. Above the retail, 190 rental units attract some seniors who stay for a year while they decide where to set down roots.

Fanning out from the Common, about 2,000 new and planned units of single-family housing provide active adults and retirees with a wide choice of floor plans and price points.

Area Realtors express optimism that they will capture a significant portion of business from retiring boomers, but with differing approaches.

“The most effective way to get people to retire here is when they vacation here,” Crowther said. A nationally known destination, Myrtle Beach “sells itself,” she believes.

“Unlike its commercialized cousin to the south,” Terhune said, Brunswick County “is more likely to overwhelm you with wildlife than nightlife.”