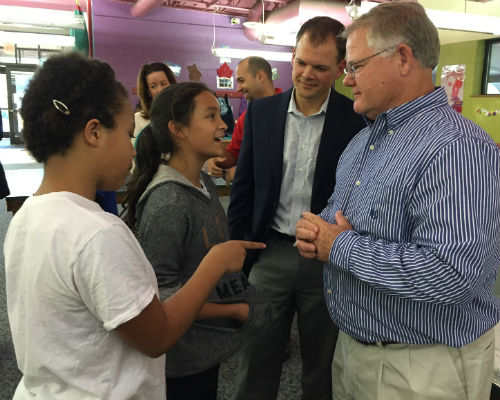 GE Hitachi plant manager Adam Hilton (center) and United Way president Chris Nelson talk to young people at the Brigade Boys and Girls Club during announcement of the GE campaign total. (Photo courtesy of Jon Allen)
United Way this year celebrated the culmination of the area's largest company campaign for this year. GE Hitachi Nuclear Energy and GE Aviation, with adjacent plants on the company’s site in Castle Hayne, have combined to make the single-largest contribution to the local United Way office, according to officials.

The event took place at the Brigade Boys and Girls Club, one of United Way’s key partners, Nelson said.

Because United Way seeks out representatives of its major donors to serve on its investment committee, GE has the opportunity to help evaluate grant applications each year, Nelson said. The committee looks at those proposals from a variety of perspectives but is especially interested in seeing collaboration among social service agencies and in measuring the impact that each grant will have.

Larger companies, in particular, like to translate money into impact, Nelson said, so contributions can be measured in terms of how well they enable recipients to meet stated goals. To accomplish this, United Way has calculated the cost of the average service rendered by its grant recipients and set that unit cost at $15, Nelson said.

Nelson said that although GE’s campaign has wrapped up, other area companies are at different stages in their campaigns. At this point, $1.6 million has been collected or is promised, he said, adding he anticipates all campaigns will be complete by March or April.

The United Way grants are three-year allocations, designed to help recipients plan longer in advance and maintain initiatives over a longer period. Each funding year new grants are given in one of three impact areas, Nelson said. Grants from the current campaign will be to support financial stability. The other impact areas are education and health care.

GE has made two other financial investments the company hopes will have impact in the math and science arena.

Cape Fear Museum officials learned Friday that the combined GE companies, through the GE Foundation, are giving the museum a $20,000 grant to create a STEM-based play space.

The funds will be used to convert the museum’s old store into a “playful learning space for families,” museum spokeswoman Amy Mangus said. The learning modules, focused on science, technology, engineering and math, will be interactive and designed for whole families.

“GE employees will volunteer with the play space in whatever capacity we need them,” she added. “That’s another commitment they have made."

Mangus said that the specifics of the new space are still being planned, but the grant will be used to make renovations and purchase materials for the activities.

"For years we've had a scholarship program for CFCC's nuclear program that provided two to three full rides," he said. "This year we're taking that same $30,000 and spreading it over a broader swath. This reflects our desire to impact more people."

White said that GE Hitachi and CFCC have had a "very long and successful" relationship in which the college provides training for nuclear workers at the plant and GE Hitachi looks to the college as a source of new hires.

“GE Hitachi’s support for CFCC and its students throughout the years has been tremendous,” Amanda Lee, CFCC president, said in a statement.  “We are so fortunate to have such a committed community partner and we look forward to continuing to train today’s students for tomorrow’s jobs.”